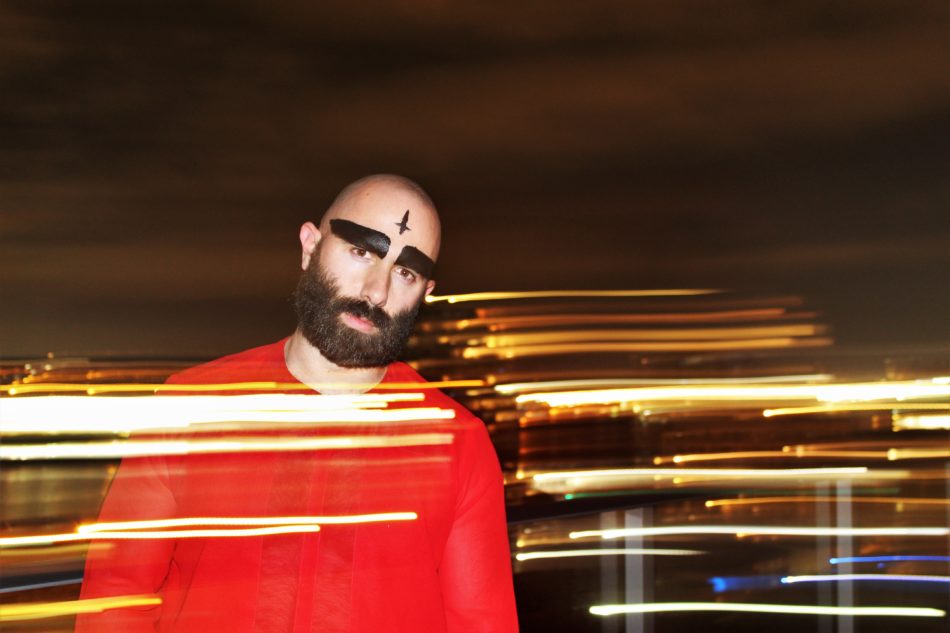 Jeff Cancade didn’t come out until he was in his mid-twenties, but as soon as he did, the rest of his life started to change.

After moving to Vancouver from Montreal, he was experiencing life as an openly gay man for the first time when he started Devours, a pseudo-goth, synth-heavy electronic project that occupies a uniquely experimental, queer niche in Vancouver.

Devours is the kind of music you might hear at a darkwave disco, or an after hours, neon-lit dance party. It’s also the kind of music that listeners might imagine would fill out clubs with crowds of people hoping to boogie the night away, but getting attention for his music didn’t come easily for Cancade.

He says he had a hard time breaking into the local music scene when he first arrived, and had to work hard as a single performer to make a name for himself in the city.

“I didn’t really know anyone in the music community,” he says. “I moved here and then I came out as gay right at that moment, and so that was my community for a number of years. There was kind of no crossover. The music scene is a really, really straight scene.”

Another challenge he cites is that “Vancouver is a rock city,” and although he’s a huge fan of punk, he didn’t see many artists in the community that he felt he would fit in with stylistically. This is why, even now that he’s established in the underground scene, Devours largely stands alone in Vancouver as a weird, glam, dark, queer electronic dance project.

“Everything was me hustling. It was going out to shows, listening to everyone’s music, supporting them, taking an interest in the community,” he says. “But I think that what I learned from my time in Montreal is that every music scene everywhere is hard to break into … Vancouver is a hard nut to crack, but the community is really, really loyal.”

As the sole artist behind Devours, Cancade has released two albums: Late Bloomer in 2016 and, on March 8 under Artoffact Records, Iconoclast, the queerer, moodier counterpart to the debut LP.

With Iconoclast, Cancade wanted to get realer than he ever had before, refusing to make his music more palatable for a heteronormative, mainstream audience and using the project as a platform for claiming his identity as both a musician and a member of the LGBTQ+ community.

“I was really flamboyant, really obviously gay when I was a kid, and then throughout high school with bullying and not wanting to have a serious threat to me physically, I sort of became like wallpaper for a lot of years, wore really boring clothes and tried to not stand out. I think that carried into my late teens and early twenties, of not really having much of an identity,” he says. “Even though I’m kind of older now, it’s never too late to carve out an identity.”

Cancade sees Iconoclast as “a snapshot of where [he] is in [his] gay life,” and a reflection of his current beliefs. As a result, it’s not only more closely tied to his current gender identity and sexuality, but also to his age, what it was like to spend “25 years in denial” of being gay, and his commitment to being a musician.

“It is really weird when you get a little older and you hit 30 and and you’re like, ‘Oh my god, I haven’t made it yet. I’m not a rock star,’ and you have to think, ‘Should I give this up? Should I work at Costco? Should I move to Surrey?” he says. “I’m, like, kind of old now and it’s fine, but I’m an artist, and I’m going to wear this eyebrow makeup and make this my thing.”

The big eyebrows, pictured above, are part of Devours’ image as “something that’s unique and fun and a blend of masculine and feminine.” According to Cancade, it was also inspired by drag culture.

Iconoclast premiered in Beatroute on March 5 and is now available for streaming online. As for upcoming performances, Devours will be playing Treefort festival in Boise, Idaho on March 22, and is planning to announce an April show in Vancouver.

Listen to Iconoclast on Spotify