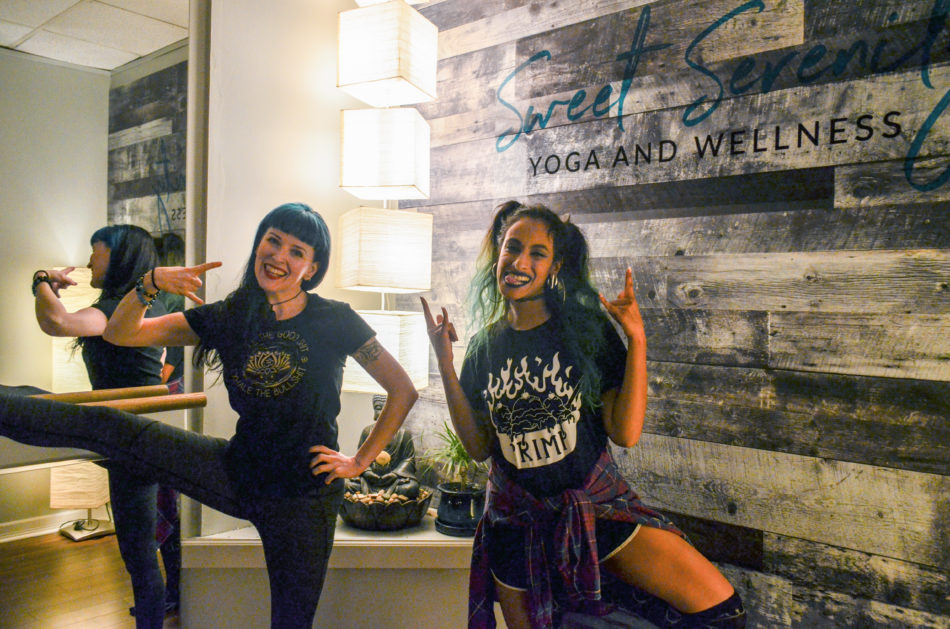 Beginning and ending in the corpse pose, a session of yoga accompanied by heavy metal music may be a more of a natural combination than one might expect.

Janine Lehfeldt, owner of the yoga centre, had heard about a similar event in San Francisco and was compelled to facilitate the practice in her own space.

“I honestly didn’t know what to expect,” says Lehfeldt. “I knew that there were enough people out there who had an appreciation of metal and rock that would wanna just check it out.”

One of the participants, Karnjit Bains, says he was intrigued by the idea before deciding to attend, and quickly found that metal and yoga “went unexpectedly well together.”

“You might think it would be distracting, or too harsh given the gentle nature of yoga, but it seemed to flow really well,” says Bains. “When you watch people do yoga and you haven’t done it before, it seems like a completely soft and gentle experience, but when you’re trying to hold a challenging pose, it doesn’t feel super gentle. Your legs and arms—they’re burning. The genre of metal seems to highlight that aspect of yoga more.”

Lehfeldt says that Franz was the first person she thought of to lead the class.

“Immediately, I was like, ‘Chelsea, do you want to lead metal yoga?’ and she responded, ‘I don’t even know what you’re talking about, but yes,’” she says.

Franz, who has led yoga classes for years now, expressed her joy at seeing so many people turn out for Namaslay, which nearly put the studio at capacity.

“I didn’t expect that many people, to be honest. I think at least half of the class was brand new, or had only tried yoga a few times,” she says. “I’m just happy this encouraged people who don’t normally do yoga to try it.”

“I really like how the metal music got you into more of a meditative state with repetitive riffs,” says Mariah Negrillo-Soor, who had only been in a yoga studio once before attending the event. “The heaviness kind of matches your heartbeat and your breath. It felt like floating. It was awesome.”

Rather than the relaxing, ambient music normally played in yoga classes, the hour-long playlist that filled the room at Namaslay included a variety of metal bands like Slayer, Deafheaven, and Amon Amarth.

“I didn’t find the music to be intrusive. The volume was good, too,” says Bains. “The way Chelsea adjusted it between her instructions versus having the music louder during the longer pose holds—I would definitely do it again. It was a good time all around.”

For anyone who hasn’t tried yoga before but is curious about the experience, Lehfeldt invites you into her studio.