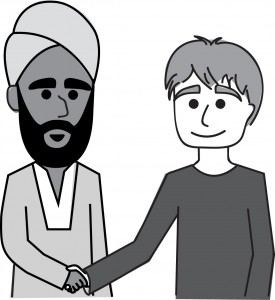 Have you ever wondered what it would be like to have your very own personal assistant? I’ve always wanted to have someone take on the many tasks that I can never find the time to do: working on my website, booking my appointments, and doing my dry cleaning. It seems that the more immersed in the real world I become, the less time I have to get these sort of things done. Sometimes I go for weeks without being able to get small simple tasks done. Quite honestly, between working three jobs, going to school and still trying to have a social life, there isn’t enough time in the day to be me. Maybe you can relate.

I pondered the question, and decided that maybe having a personal assistant might not be a bad idea. But the reality of the situation is that I don’t make $150,000 a year to justify such an action. I recalled back to my travels to India the previous year where I had learned about outsourcing and even visited a call centre managed by IBM.
At this moment I had an epiphany. I would hire my assistant from India! As I discussed the idea with friends, I had many mixed reactions about it. Some friends said that they wanted to find out how they could do it themselves, others felt that I was taking advantage of someone in a less developed country. The fact of the matter is, most of the work done by North Americans is actually outsourced to different countries. Most the clothing you’re wearing was made in another country, the food you eat quite often is imported, and the services you buy, usually have some form of interaction with another country. It’s the way of the future: globalization.
As a bit of an experiment I decided to see what effect globalization has had on us on a micro level, and see if I could start outsourcing bits and pieces of my life. This is what I found:

September 15th:
I started seeking out resumes on Craigslist, and sent out several emails to interested people. For each, I received a reply, usually in somewhat broken English. Very informally, I talked to each applicant and just asked them what they were capable of. But let’s be honest, it’s impossible to conduct a proper interview over the internet.

September 17th:
I’ve been talking with a man named Naga from Ramanathapuram, India for some time now. Our conversations are short, but he seems capable of the job. And besides, I can’t argue with his email signature:
Looking for a longterm relationship with believe in HARD WORK, – Naga
He greets me by calling me “sir,” which feels a bit weird because I’m sure he is double my age. I’ll be talking with him shortly to get him on his first few tasks.

September 22nd:
So I have finally found the time to talk to Naga, and get him started on his first few tasks. I asked him to create an invoice for a video editing job I had done. I gave him the specifics, and waited to see how things went from there. I also asked him to start some research for me compiling a list of event happening around the Vancouver region that may be of interest to University students.

September 23rd:
He’s quick. He got back to me right away with the invoice. Here’s what it looks like…
Apparently, MS TextArt is still in style, and we use typewriter fonts in business documents… well, lets just say I had to make some edits. OK, no one is perfect, and apparently I’m a perfectionist.
As for his research, he sent me this email saying, “and I am need more advice to fine events/festivals, etc… where to find any website?” I was kind of disappointed that he had never heard of Google before, but I sent him some sites to look at.

September 28th:
This one took a bit longer. He sent me a list of events happening in Vancouver… but I’m pretty sure he just went to some random online events list and copy/pasted the whole thing rather than looking it over. The events weren’t relevant at all to university students. The “seniors yoga night” in Vancouver didn’t seem that appealing to me. Oh well.

September 30th:
I had asked Naga to find me some website templates that I could use for work. Something professional, yet trendy. He sends me what looks like my grade eight web design class project. Sigh. I’ll do this one myself.

October 1st :
I ask Naga if he can book my appointment with my car dealership to have an auto-body repair done and give him the phone number. My dealership calls me, asking WTF is going on and why someone from India is claiming to be me. I am now the water cooler topic of interest at the dealership. Epic Fail.

October 2nd:
OK! I decided it was time for a new assistant. Although Naga is prompt and reliable, he clearly has no sense of style, or any cognition of what I’m looking for. I start talking to someone else by the name of Vimal from Chennai. His English is much better, and appears to be much more professional. I hope for the best.

October 6th:
I have been having a lot of meetings lately, some of which need to have minutes recorded and transcribed. I scan a bunch of these hand-written minutes and send it off to him to put into a proper format.

October 9th:
I finally get my minutes back, one day before I need them to go to review. They’re horrible, with spelling errors, lazy formatting, and completely wrong sentence structure. He says it took him three hours to do, but this probably should have taken only one. Although Vimal speaks perhaps better English than me, I’m not sure why this is the quality of work I’m getting back.  Epic Fail x2.

At this point, I’m too frustrated to carry on with trying to outsource my life. It’s far too much work and quite frankly, even though their wage is a third of what ours may be, it is not worth the money. Although trying to cut costs by outsourcing jobs to other countries seems like a great business model for some things, notably in areas of the service sector, it’s best left to those with expertise.

The part I failed to mention before, was that many companies and individuals who are outsourcing their services, are trying to move their operations back to North America. Unfortunately, customers of these companies are coming back with the same complaints as me. And it’s not to say that they are not capable of getting the job done or lack the training, but when it comes to the service sector, having a strong working knowledge of western culture is crucial.
I suppose there are some things suitable to outsource to other countries – but my life isn’t one of them. Maybe in a few years, I might be able to get a real assistant?… Or not… Epic Fail.