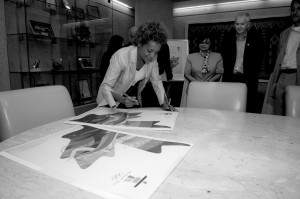 Nine Kwantlen students recently had an opportunity of a lifetime to get involved with the games.

Students were invited by the Governor General of Canada, Michaelle Jean along with the Vancouver Organizing Committee to participate in a youth forum to discuss what has been a tradition of the game for many centuries – peace.

The event, which was put on by VANOC, hosted both to high-school and university students to try to promote the idea of peacemaking through sport and culture.

The students, from a wide range of faculties, including the Kwantlen President’s Ambassadorial Team, had the opportunity to participate in an open forum.

The students collaborated together to voice their views of peacemaking opportunities to the Governor General as well as VIP’s including John Furlong (CEO – VANOC), Sir Ken Robinson (notable scholar and author), and Matt Goldman ( co-creator of the Blue Man Group).
One participant, Kassandra Linklater who is on the PAT and News Editor of the Runner, said that “It was an enlightening experience. It was interesting to see how students my age defined peace and while some goals seem quite lofty, others did seem realistic.”

“The Vancouver 2010 Olympic Truce provides us all with a wonderful opportunity to expand the circles of peace and solidarity in communities across Canada and abroad. Through a call to action, it challenges us to channel our creative energy towards ensuring that respect and tolerance prevails in our families, our schools and our neighbourhoods. I encourage all Canadians to get involved,” said the Governor General.
Students played upon several themes during the conference which included the idea that Canadians are not being educated enough when it comes to understanding world culture and ideas.
Other common themes included promoting peace and world understanding though both sport and culture, how small initiatives can make a big difference in the world, and how the Olympic games should be hosted in less developed countries to give them an opportunity to benefit and develop.

The Governor General asked to extend the schedule, so that she could hear from as many students as possible.

“The ‘me, myself’ mentality has to change, and that first has to happen locally. Then, it can spread globally,” she said.

“I can see just how far removed you are from the narrow, ‘fend for yourself’ mentality that seems to have taken hold in the world, to the detriment of all.”

VANOC plans to continue its peacemaking initiatives through the games by further starting several other initiatives, many of which are directly targeted to youth.