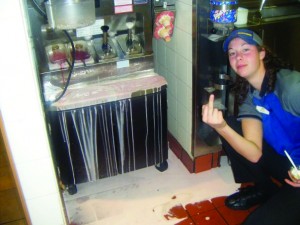 Just another day at Micky Ds

This is going to be as therapeutic for me as it will be amusing for you. I slaved away at Mcdonalds for almost two years – the psychological damage will remain for the rest of my life.

I have so many stories but alas, I’m going to cap my ranting at one particular shift. Probably the most horrific shift ever – there was about 10 minutes until closing and every employee’s worst nightmare was realized. A fucking tour bus filled with  tourists got dropped off and each person ordered a full meal and a dessert. There were only three people working at the time. I was one of them…typical. I watched in horror as the spotless restaurant was invaded by the tourists.

At the same time, the drive thru line was the longest I had ever seen it. The young girl making burgers in the back started to cry due to the stress, the muffins for next morning had caught fire, and there were so many machines beeping and cars honking that I thought the whole place was going to go down in flames. After the invasion, it looked as if our restaurant was hit by a bomb.

They fucking left ALL their shit there, not one put their tray in the garbage. I stayed two hours after work, re-cleaning the restaurant. When we were finally done, I thought to myself “I deserve a little treat, something for the road.” This was my most brilliant idea ever…..not. Little did I know that the ice cream machine had gone into “heat mode” because we were there so late into the night. Consequently, when I tried to make myself a little cup of ice cream, the machine exploded. See the picture that reveals the aftermath and yes, that really is me from that horrific evening. Please notice the little sundae cup in my hand…FML.