Idiot drivers: screw the lot of you 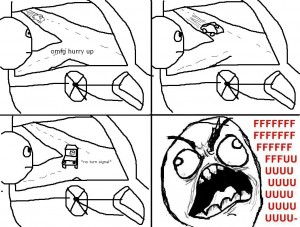 Seriously people, you're all dumb.

Do you not signal when making turns/lane changes, drive around at night without your lights on, or text/talk on the phone while driving? Congratulations, you may very well be an idiot driver.
First up, non-signallers. Are you so dense that you fail to see the point of flicking that little arm beside your steering wheel whenever you decide to make a turn or lane change? I suppose it must be hard coming to terms with the fact that other drivers may want to know what you’re about to do. I mean, people love surprises, but not when it’s your dumb ass trying to merge into a lane without warning. Alternatively, if you’re headed down a road and someone is stopped at an intersecting street waiting for you to go past before they pull out into the street, let them know that you’ll be turning off before reaching them.

Next up, not turning on your lights at night. Confused as to why people keep flashing their lights at you? Maybe it’s because they can’t see you. As humans our eyes have a bit of trouble seeing things in the dark so car manufacturers came up with the genius idea of driving lights, use them.

Finally, texting and talking on the phone. Everyone has encountered a driver who’s swerving all over the place, driving super slow or doesn’t use any signals (see above). As you pull up beside the person at the next light, you notice that they’re looking down at their phone, frantically typing out a text message, or they have their hand up to their head, deep in discussion with the person on the other end. They seem oblivious to their terrible performance on the road, and oblivious to your glaring at them. I don’t care how capable you think you are at multitasking, you still suck at driving. Nobody gives a shit that you just received a text asking what you’re up to, or if you want to get drunk later that night, so just keep your stupid phone in your stupid pocket. Ten years ago people barely had cellphones and they were able to survive without talking and texting at every waking moment, maybe you should try it too, idiot.