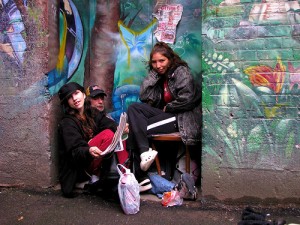 The Vancouver-Whistler Olympic Winter Games are scheduled to take place on unceded Native lands, lands that were never given up by indigenous communities.  For growing numbers of indigenous people, homeless and poor people, low-income tenants and sex workers the Olympic Games represent a continued history of colonization and “social cleansing” of poor communities.  The construction of infrastructure for the 2010 Olympics itself is adding to extensive destruction of local indigenous peoples’ traditional homelands and contributing to the displacement and increased criminalization of people living in poor urban neighbourhoods.

Visible poverty, as in other Canadian cities, comes up against the property and profit concerns of legitimized business, commercial development and property speculators.  Neighbourhoods like Vancouver’s Downtown Eastside (DTES) undergo a conflictual process of  transformation from local sites, residences and workplaces of the poor, to be made ready as sites for the enactment of spectacles  of global capital such as the Olympics.  To address their interests, as business people, landlords and investors vie for position within developing neighbourhoods, they, often successfully, bring pressure to bear against local politicians and police to act against sex trade workers (as has also been the case for homeless people).  As Carolyn Brooks in  her 2002 book, Globalization and a New Underclass of ‘Disposable people,’ suggests: “Criminalizing the poor becomes a way of cleansing the city, making it a supposedly safe and attractive environment for affluent people.”  Often these affluent people are members of a global tourist class seeking anonymous pleasure in once distant locales.

As global capitalism develops more and more, poor and marginalized people are criminalized and punished.  Examples of this agenda have become regular features of social development in Vancouver as part of 2010 Olympic preparations.  In the lead up to the Games, this has typically taken the form of new by-laws and polices that arm police, business owners and private security companies with a variety of means to harass street prostitutes and remove them from specific neighbourhoods.  There has also been an ongoing deployment of repressive policing practices, including “sweeps” of street people and the use of boundary conditions to prohibit prostitutes from even entering certain neighbourhoods near planned Olympic venues.  These policies are not about public safety but about investment, redevelopment and tourist dollars.

One troubling policy initiative in Vancouver has been the Civil City Act, which targets a range of street activities and extends policing beyond public forces, providing business associations broad leeway to intervene.  The program includes hundreds of thousands of dollars for increased private security, in addition to regular city police budgets and the approximately one billion dollars  being directed towards Olympic security.  The Civil City initiative was explicitly designed to target street prostitutes, panhandlers and open drug users in specific areas such as the DTES.  Such policies do nothing to address underlying issues of poverty, precarious housing, drug abuse or unemployment.  They are effective at removing people from the streets and getting them into custody.
In addition, following the awarding of the Olympics to Vancouver, the city initiated a “street ambassadors” program in which public money was directed to business improvement associations to hire private security firms to patrol downtown streets and clear areas of street prostitutes and homeless people.  The so-called Downtown Ambassadors have been given free reign to intimidate and harass people deemed to be “undesirables.”  Their activities include compelling people who are sitting or sleeping on the street to move along, regardless of location or circumstances; telling people to stop searching for recyclables in garbage cans; identifying particular individuals as undesirable and telling them that they are not allowed within a particular geographic area, so-called “no go areas”; and following or staring at and taking notes and photographs of individuals identified as undesirable, according to Travis Lupic’s article, “Downtown Ambassadors face human-rights complaint,” published in the Georgia Straight.

In addition, other Olympic inspired by-laws target the basic everyday living activities of street prostitutes and homeless people.  Newly installed benches make it impossible for people to stretch out and many bus shelters have removed benches altogether.  New garbage canisters on streets make it more difficult for people to gather recyclables.  In addition a newly introduced by-law removes large garbage bins from the DTES.

These measures have been established within an overall plan to remove downtown residents from the area.  In addition to jail, some have been removed to mental institutions and others to “detox” centres on former military bases.  Another measure has removed people from the province entirely through a “fly-back” program in which the B.C. Government pays the costs to return persons wanted on warrants in other provinces.

Instead of addressing the roots of growing homelessness, poverty and numbers of marginalized individuals, the criminal justice system is deployed to contain or erase, to “cleanse” cities of human manifestations of the problems of global capitalism.  Ironically, perhaps, the pressures to hide these manifestations become most intense during festivals of global capital such as the Olympics, international film festivals and the Football World Cup.  These events serve to exacerbate conditions of suffering, exclusion and desperation for the poorest and most marginalized of local working classes in host cities.