Shifting Ice: Treasure Given Up

“Right, right,” Klezyp whispered as they made their way to the terminal. An amicable Jukkopo smiled up at them as they approached, his tendrils twitching merrily.

“Welcome,” he greeted the Zwitii. “How can I help you?” 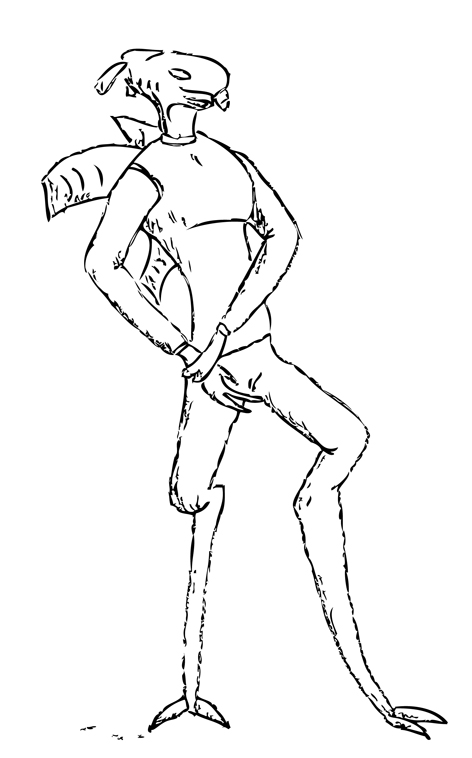 “My name is Klezyp,” Klezyp informed the alien, “and this is my friend Vintis. I called ahead and booked two seats on the shuttle, I believe?” it asked as it ran its finger over the reader on the Jukkopo’s desk. The alien considered his screen for a moment before he turned and smiled once again.

“Of course,” the Jukkopo chuckled. “Proceed to platform 37. Boarding for Uixynki will begin in another hour. Have a safe flight!” he shouted as Klezyp smiled and walked through the security screen. Vintis returned the alien’s polite smile and lumbered through the glowing force field. The rippling blue energy tingled against its skin.

“There! That was the hard part, eh?” Klezyp asked as it wrapped its arm around Vintis’. “It’s all smooth flying from here.”

“I would hope so,” Vintis grumbled. “Isn’t Uixynki closer to the war zone than Kapilo?”

“Maybe a parsec or two, sure,” Klezyp chuckled nervously. “But that’s all relative. It is, after all, several dozen light-years from Kapilo, at least.” Klezyp grunted as it helped Vintis sit on a waiting bench. “That is all I am worried about, Vintis.”

“Good enough,” Vintis grunted as it relaxed. “I suppose it’ll be nice to see another world. I’ve spent the last fifty years on Kapilo. There are times I forget most systems are trinary, eh?” it remarked. Klezyp giggled and patted Vintis on the shoulder.

“Uixynki will fix that,” it informed it. “It’s a beautiful moon in a lovely blue giant trinary.

“What, you think giant rocks have all the fun?” it asked. “I’m going for a drink. Care for anything?” it asked as it stood up. Vintis smiled.

“Sure,” Vintis smirked. “If the vender-bots have it, I’ll take a Yellow Moon,” it replied. Klezyp let out a quick laugh and quickly bent down to give Vintis a kiss. Vintis sighed as it watched Klezyp disappear into the crowd. Suddenly, someone on the bench behind it let out a low whistle.

“Damn, girl, you sure are lucky,” Vintis turned to find a tall, slimy Oulu flapping her sensory tendons at it. “I haven’t smelt love like that since I was on Cordiina.” Vintis growled and gave the tall, sightless alien a sneer.

“What business is it of yours?” Vintis asked. The Oulu chuckled.

“Everything is my business,” the Oulu whispered, lisping over her sensory tendons. “I was there, girl. I was on Cordiina. I smelt the Izraal’s fear as their sun exploded and their world burned.” Vintis sighed and shook its head as it turned away from the alien.
“If you were on Cordiina,” Vintis whispered, “then how come you’re not a cloud of vapor right now?” Vintis smirked as it thought about the benefits of that scenario.

“Because,” the Oulu replied, suddenly sitting right next to Vintis, “I knew, girl. I knew the sun would burst. I smelt the change in the sky and I fled.” The foul-smelling alien chuckled. “I fled.”

“And politely forgot to warn your Izraal allies?” Klezyp asked loudly as it returned, a Yellow Moon in each hand. The Oulu turned her head towards it and scoffed.

“I smell disbelief of my powers,” she growled as she reared up, “and sweet sugars.”

“These drinks are for us,” Klezyp hissed at the alien. “Go bug someone else.” The tall Oulu let out a reek of indignation that caused Vintis to gag, but turned and stomped away. Klezyp sat down as it watched the deranged alien go. “Poor soul probably was on Cordiina when it exploded,” Klezyp remarked. “It’d explain why she’s crazy.” Vintis chuckled as it accepted its drink.

“Klezyp, if I’ve learned anything these past few days, it’s that the whole universe is crazy.” It remarked. Klezyp lifted its glass and touched it to Vintis’. The two shared a toast.

“Her calling you ‘girl’ is testimony to that,” Klezyp replied. Vintis downed its drink.

“I still think it’s no game,” it said slowly. “Sooner or later, they’ll all find out.”

“Maybe,” Klezyp sighed as gate 37 opened up, “but for now, let’s get off of this forsaken rock.”