Where to go for Easter weekend

The long weekend is upon us and what better way to spend it than in a city other than our own. No matter which way you head, north, east, south or west, there’s a weekend getaway waiting to happen. Long weekends can mean anything from spending some quiet, quality time with the family to taking a break from your relatives and escaping the regularities of life.

For students, a break like the Easter long weekend usually means a couple days off school and catching up on some sleep. But wherever you are, whoever you’re with and however you like to spend your free time, vacations are a nice way to wind down or recharge.

Vernon, B.C. is the perfect sort of place to do what you want with who you want.

I’ve been to Vernon twice, both times for their annual Winter Carnival in February.

It’s a beautiful place to be in the winter months because they actually have real winters there: the streets and trees are covered in snow, and Vernon’s Silver Star Mountain Resort is always ready for locals and visitors alike. Because of the city’s coldtemperatures during the winter, I’ve always assumed Vernon to be the type of place you only visit between November and March. The truth however is quite the opposite.

Vernon is a four-season destination where you can go tubing down Silver Star’s snowy slopes and on Lake Okanagan’s choppy waters in the same day.

You can go camping, hiking, biking, canoeing, kayaking, skiing and snowboarding all within the city’s limits, and still have time for dining, shopping and exploring the town.

The Vernon Winter Carnival is the largest of Vernon’s festivals, but it’s by no means the only one. Farmers markets run from spring to fall, and events like Cherryville Days, the Sunshine Festival, the Greater Vernon Dragon Boat Race and the Rare Earth Music Fest come and go all summer long.

Vernon isn’t like Vancouver: there isn’t much of a club scene, nor are there big sporting events or concerts to go to, but the point of a vacation is to get away from your normal life and try something new.

Vernon’s only a 441km drive from Vancouver, which makes it a perfect place to spend three free days however you want to spend them. Portland is a small city, but it’s split into neighbourhoods like any other. Each neighbourhood attracts its own set of locals and each has it’s own charm. The Pearl District can be likened to our Granville Island. There are a ton of independant restauranteurs and local designers that have set up shop in what used to be Portland’s industrial area. You could spend a day walking around the district popping in and out of cafés and galleries. In the neighbourhood, find the worlds’s largest independant new and used book store, Powell Books.

Downtown Portland is built on the Willamette River and looks across at Vancouver, Washington. It’s a relatively small core and there isn’t much to see, but it’s a great place to take in brand name shopping at American prices. The park at the river is a great place to relax after a long afternoon of roaming the city as well.

Across the city from the downtown core, but still within walking distance, sits the University of Portland. The campus is a mix of old and new buildings with a very open, very green feel. There’s an art gallery on campus as well as a number of super inexpensive performances put on by university students and professors.

As with any city on the West Coast, the real heritage along with the real people can be found in China Town. It can get a bit sketchy at night, but the city’s coolest bars and most interesting eateries can be found on a walk through China Town, or Old Town as it’s also refered. Stop by Voodoo Doughnut when you’re in the area. The doughnuts are an institution in the city, which is a good reason why the shop is open 24 hours but has no seating.
Just south of the city, through a Dunbar-type neigbourhood you’ll find Washington Park. If you like parks, there’s no reason why you won’t want to spend a least an afternoon looking around. With a number of memorials, gardens and a zoo, Washington park is a nice spot to take it easy.

With 28 microbreweries in the city, each with a restaurant attached, Portland’s eateries attract customers with cheap cuisine and even cheaper beer. Most restaurants offer $3-$5 appetizers before 8 p.m. along with $2-$4 pints. Some places even offer free appetizers. If there is one thing you do in Portland, visit a microbrewery for happy hour. You won’t taste a fresher, more delicious pint. 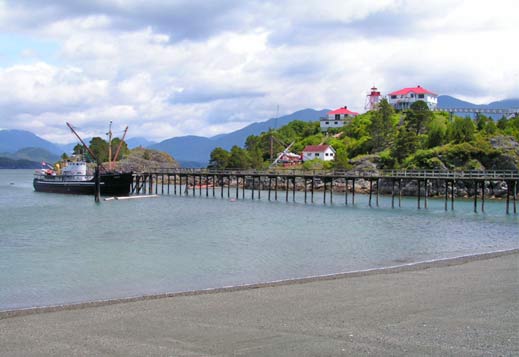 If you want to experience something new this long weekend go to Gold River.

If you are afraid to leave tall buildings behind and can’t stand to be more than five minutes away from a Starbucks then read no further.

Gold River is located on Muchalat Inlet on the west coast of Vancouver Island.  As it is with most Island towns, Gold River is an industry based community relying on logging and fishing.  In other words unless you have a keen interest in the outdoors there is not much to do there.

Hiking, kayaking, surfing and climbing are all great things to do around town but some of the best attractions are the caves.

Getting to Gold River from Vancouver involves a ferry trip and close to a three-and-a-half-hour scenic driving along the island highway and through Strathcona Park.

A 17 km drive from town on typical Island logging roads where you will most likely see black bears and the odd heard of elk will take you to the parking lot for these easily accessible caves.

Snow usually covers the ground in March and April so be prepared for any weather.

Once at the cave network you can follow a maintained path from the parking lot to the 15 known entrances.  If there is still snow on the ground find someone who knows the area to guide you, it can be pretty dangerous trying to find holes in the ground when they are covered in snow.

A helmet and reliable headlamp are also a must for any caving expedition.

The caves offer close to 1500 feet of tunnels to crawl through and some huge caverns for those not interested in the tighter squeezes.

One of the main caves opens into a beautiful grotto with a stunning waterfall in old growth forest, a great place to stop for lunch.

If you mange to go in the early spring when there is still snow you can find spectacular icicles and a rather crude natural ice rink in the main cave.

If you don’t mind getting a little dirty and have an adventurous side then this a great weekend trip. Victoria is one of my all-time favourite places to go. It’s definitely smaller than Vancouver and it has that relaxed “island” feel, but it manages to be fun and lively as long as laid back is your kind of thing.

Now it may be quiet, but the downtown core – called the Inner Harbour – is as much fun to walk as Vancouver’s is.

There are coffee shops and art galleries, but because of the island factor, there seems to be more smaller, independently owned places. The island-folk seem to be more opposed to the chain-business thing in Victoria.

One of my favourite things to do in Victoria is eat.

Right near the water in the red-bricked Market Square is a Mexican restaurant called, Café Mexico. The food is what I take to be authentic, and the patio which looks out on Market Square is one of my favourite places to sip a Corona and munch on tortillas and salsa.

Not far from Café Mexico is a tiny little French restaurant called Matisse, which is named after the famous French artist.

The restaurant is amazingly intimate with white tablecloths, candles and only a handful of tables. Unfortunately, a meal for two at this restaurant might cost as much as a Matisse original, but is definitely worth every penny.

Personally, I am a nut for outerspace, and if I choose to get out of the city for an afternoon, I head over to the Little Saanich Mountain Observatory for some education and science. Once again, it’s quiet and it’s laid back, but I suspect for different reasons. Sure, there’s the B.C. Legislature and the Empress Hotel, but honestly who cares?

One is full of overpaid servants who don’t really do anything and the other one serves really expensive tea.

The best times I’ve had in Victoria revolve around a table of food and drinks, with me taking my sweet-ass time and enjoying every moment of it.