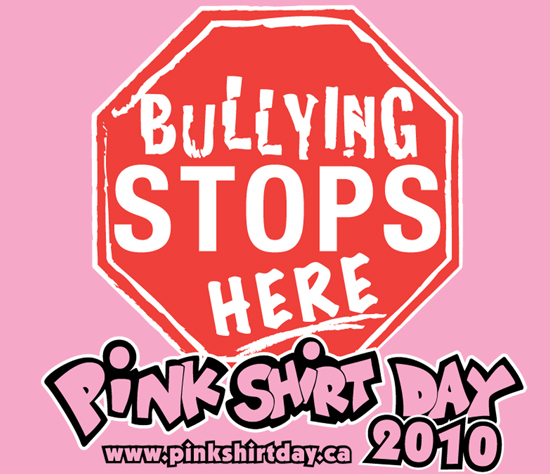 On March 22, Surrey Mayor Dianne Watts officially announced that Wednesday, April 14, 2010 would be Pink Shirt Anti-Bullying Day from a decision at the public hearing.

Dave Teixeira, the Communications Director of Pink Shirt Anti-Bullying Day, gave a presentation to council. None of the council members were against the motion.
“I’m speaking at about 20 or so cities, but we have more than that which have sent proclamations,” said Teixeira.

But Teixeira, who helps lead the non-profit company, mentioned the difficulty going to some of the cities to attend the hearings.

“We have no budget, so it makes it very difficult to go up there [Northern cities]. We don’t want to spend money traveling when it could be going to educational programs.”

And with that amount of fans, he was proud to say that at least one person on each continent wore pink for last year’s event.

Teixeira hopes that Pink Shirt Anti-Bullying Day will continue to grow and will hopefully become a national day in 2011.

“We anticipate the province of British Columbia is going to declare April 14 Pink Shirt Day. Next year, we are hoping the parliament will also declare it Pink Shirt Day on April 14.”

According to Teixeira, the movement began in September of 2007 when a grade nine boy from Nova Scotia was bullied for wearing a pink shirt. The next day, a group of 50 grade 12 students stood up for the boy by wearing pink shirts to school the next day.

Christy Clark from CKNW Radio heard the story and started Pink Shirt Anti-Bullying Day in Vancouver by introducing it in schools.

Now every year, Clark does a live broadcast from a school that has done something to prevent bullying, because the goal of the movement is to prevent and eventually end bullying.

The official shirts can be bought for $5 at London Drugs with all proceeds going to the Boys and Girls Clubs of Canada.

Bullying is a very unrecognized problem in Canada. Whether it is face-to-face or online, physical or emotional, Teixeira said that one in 10 students is bullied every seven seconds.

And it just isn’t a problem with the youth of the nation; Teixeira mentioned that 35 per cent of workers are bullied in the workplace.

There have been over 50 suicides in North America which were results of bullying.

This will be the Third Annual Pink Shirt Anti-Bullying Day in Vancouver.

There are 76 businesses and organizations and 106 schools worldwide that are linked with Pink Shirt Anti-Bullying Day.