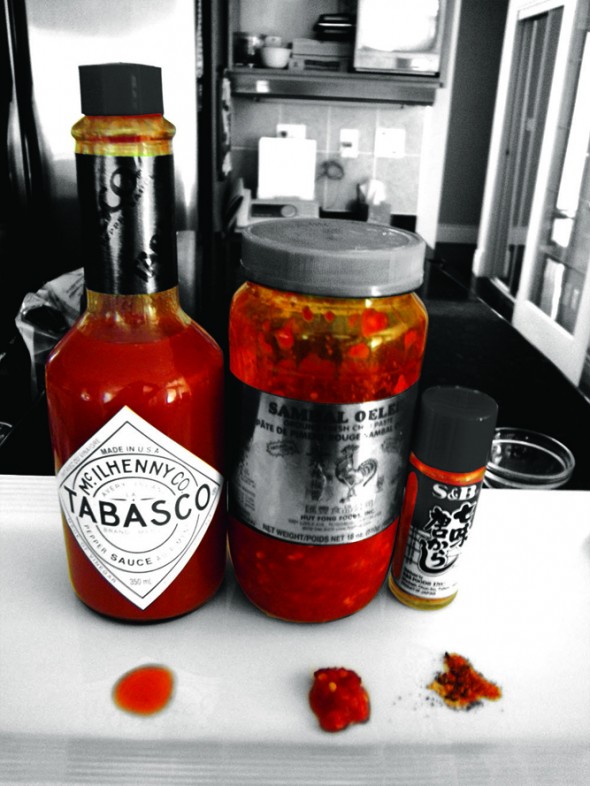 Hot sauce. Liquid fire. Dynamite. Call it what you want but it doesn’t change what this nefarious condiment can do to the uninitiated. It has the power to reduce even the burliest men into sniveling children. It can elicit everything from hacking coughs to watery eyes and yet we all can’t help but splash the precious liquid gold on pretty much everything.

A plant as humble as the chili pepper can create a myriad of condiments and sauces, with each varying by country and even region. The following list may not be representative of what the whole world has to offer in terms of “fire power” but I hope it persuades you to sample some of the more exotic hot sauces.

Tabasco isn’t exactly the most exotic of finds but nevertheless deserves a mention. Tabasco belongs to the class of hot sauces primarily made with vinegar, salt and chili peppers. Aged in oak barrels for up to 30 years, or so the bottle says, the red pepper slurry is mixed with some distilled vinegar then filtered to get rid of the larger pepper chunks that might remain. The famed sauce is also the perfect thing to add some flavour to your next barbecue. Why? Chances are if you’re using either store-bought barbecue sauce or the real deal, it probably has vinegar in it to give it that tang that makes us hungry like wolves. A few drops of a vinegar-based hot sauce of choice into your BBQ mix will liven up any “grilled grey steak” and “hockey puck of beef”.

You may have already seen Shichimi at a Japanese restaurant, either in their original bottles or in these small lacquered containers that include a long thin scoop to keep every one’s grubby paws out. Shichimi togarashi is a mixture consisting of mainly crushed red peppers, Sichuan peppers, orange peel, white and black sesame seeds, and the occasional addition of seaweed, hemp seeds and ground ginger. “Orange peel?” you might ask. Yes, and it is probably this lone ingredient that gives Shichimi its distinctive flavour.

Sambal is an umbrella term referring to a family of chili-based sauces prevalent in South East Asian cuisine. The one thing that really unifies these sauces, if anything, is that the chilis are ground fresh as opposed to being fermented. Anything from lime juice to fermented shrimp to garlic is added and the addition of an ingredient or two can easily make the difference between any two sambals. The more common sambal you’ll see at your local Asian grocery is either sambal oelek (the one with the rooster) or sambal belacan, which is chili peppers made more interesting with toasted shrimp paste. Either of the two are a good addition to your next stir-fry or as an all–around condiment.