Vuvuzela: horn of the Devil 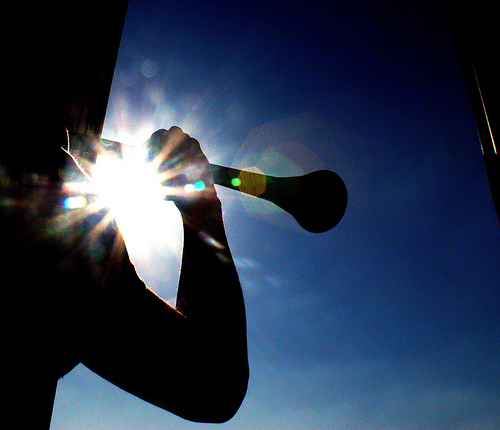 The 19th World Cup has brought a lot of controversy to the world’s game. There has been a lot of terrible officiating and the loss of South Africa’s most famous politician’s granddaughter. Many doubted that Africa was ready for a World Cup after the terrorist attack on the Togolese team at this year’s Africa Cup of Nations.

But if there is anything that has pissed me off, it is the “sound of South Africa”.

I won’t lie; it is hard to stay awake during a soccer game when it is live at four o’clock in the morning. But what is even more frustrating is when you can’t hear the commentary. I don’t mind hearing the roar of the fans after a goal, or the songs they sing when they are winning a match. But why are vuvuzelas constantly being blown?

You don’t get the full experience of the game. I miss the times when the crowd goes silent after someone misses a penalty kick, or when they curse the referee after he makes a bad decision. The emotion of the game is being lost thanks to these plastic cone-shaped noise makers from Hell.

FIFA considered to get ban them, but claimed they were part of the South Africa’s “history”.

I’m sorry, what soccer history does South Africa have again?

How is a player supposed to concentrate when his team is in a penalty shootout and he has to score to keep his teams hopes alive? It’s absolutely ridiculous. And it’s not like the noise comes it bunches. It is as constant as the game clock. At times, I can’t hear myself think.

I have watched all but one of the games, and I can say there are only two sets of fans who can drown out the vuvuzelas; the English and the Spanish.

The English, because they are drunk off of their asses and singing “God Save The Queen”, or “England ‘till I die”.

The Spanish, because they are a very proud nation of the game (plus they have a decent team this year). The reigning European champions have never won the World Cup, and many, including myself, feel like this is the year they can break the drought.

The Brazilians were also very loud, but I don’t think enough fans could afford to fly to South Africa for them to drown out the bee hive sound that 40,000 vuvuzelas make.I pray that no one keeps the vuvuzelas going, because after a month of listening to them, I have just about had it.

If the vuvuzela has brought anything positive, it is that we can make insults like, “Why don’t you blow on my vuvuzela?”