The Young and Penniless: Generation Y

Echo Boomers, Millenials, Generation Y; whatever you want to call them, they all describe one generation; today’s youth born between 1971-1994. They are the information generation, the Boomerang kids and the majority of students that go to Kwantlen.

I am a member of this enigmatic group of youth, and I have to admit much to my chagrin, I reek of the stereotypes that have been bestowed upon our once cradled inflated little heads. I am stapled to my cell phone, I know my way around a computer and I have the attention span of a pigeon. 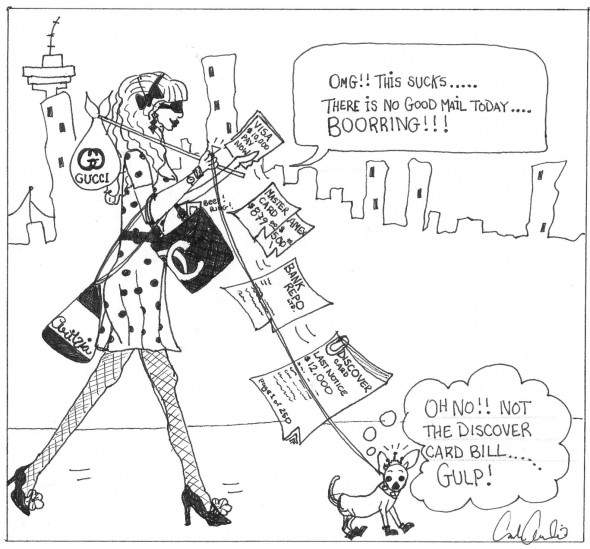 Our generation has become notorious for growing up with somewhat of a silver spoon in our sassy little mouths. We are the sons and daughters of our hard working conservative baby boomer parents. They had James Taylor in their cassette players, and were coined by the public as “yuppies “, but it was because of our parent’s optimistic, self involved, freedom fighting outlook on life that made our generation the way it is today.

Soccer, softball, dance class, music lessons and early morning hockey games were only some of the endless perks in our very treasured childhoods. We watched Saved by the Bell on Saturday morning and wore Fido Dido t-shirts to school. We ate gushers and drank Capri-Sun.

We are products of the pop culture injected society we grew up in; but much like every generation we are projections of the era we live in.  At the risk of being the billionth writer to solemnly mention the economic downtown with intellectual poise, the truth is that it remains a serious issue with employment and personal debt and we are the economic projections walking around in True Religions and Nikes. According to American platinum feathered finance guru, we are “Generation Broke”.

In an attempt to compile research for this article I ventured into the finance section of the public library, a place I would normally not be seen, because much like my empty pocketed counterparts I am part of “Generation Head-in-the-Sand” and the idea of confronting my personal finance issues makes me queasy. I decided to suck it up for the sake of our readers and put my heebie-jeebies aside.

After 45 minutes of crooking my head to the side in an attempt to read the vertical spines of the plastic covered books, I spied a DVD by Oprah’s fog horn voiced financial guru, Suze Orman. She is brash, loud and quite intimidating, and the perfect financial vessel for the American People to relate to. Orman claims that we indeed are products of our environment, but quite intelligent. She goes on about how 85 per cent of people aged 25 and older hold a high school diploma and 27 per cent have a college degree. So it couldn’t be a lack of intelligence that continues to hold us back from being economic Einsteins, and judging from the average trophy and ribbon count per child’s bedroom during the early 90’s, it couldn’t be our parent’s lack of involvement either. So what was holding this generation back from financial autonomy?

And then she said it; a word I knew was coming, but tried not to think about. The C word. The seemingly innocent but in reality so very lethal, “Credit Card”. Once she broke the seal, a veritable Hoover dam of C words continued to spew from her thickly burgundy glossed mouth. Credit score. Credit report. Credit history. It felt like with every dreaded C word, my blood pressure turned into one of those circus guys that stuffs themselves into a canon aimed for the blue yonder. Once I got a grip, and starting paying attention like an adult I realized how true her words rang. We are a generation in trouble. It’s not just financial trouble, for some reason we seem to find it so hard to face the music and be held accountable.

I can say this with some credentials, based on my shopaholic past. Much like the colorfully amusing movie, I was once a fashion crazed shopaholic haphazardly throwing around my plastic, like it was going to melt if I didn’t use it. I learnt the hard way, and was fortunate enough to have a sympathetic grandmother to help bail me out of the financial abyss I was voluntarily plunging myself into. The whole reason our Nation’s economy took a nose dive is because people, much like myself were living far beyond their means, and charging it.

Although it took me forever to pay back my grandmother I consider myself one of the lucky ones, my home wasn’t taken away, I had no kids to feed or spouse to answer to, but the blow to my ego took years to repair, and I am now in a place where I no longer feel as if I need $250 jeans on a student’s budget. I only changed my ways once I disconnected my self worth from the merchandise and exercised some much needed self control.

After finishing the DVD and roaming over a few articles I realized the point I want to make isn’t a self righteous finger wagging Dr. Phil-esque moral to my MTV counterparts about self control and materialism.

The point is to educate yourself; if you are sent a credit card, don’t activate it just because you can. Ask questions, get informed. Ignorance is not bliss, and I’d know because it’s wasn’t so long ago that I was ignorant and without bliss.