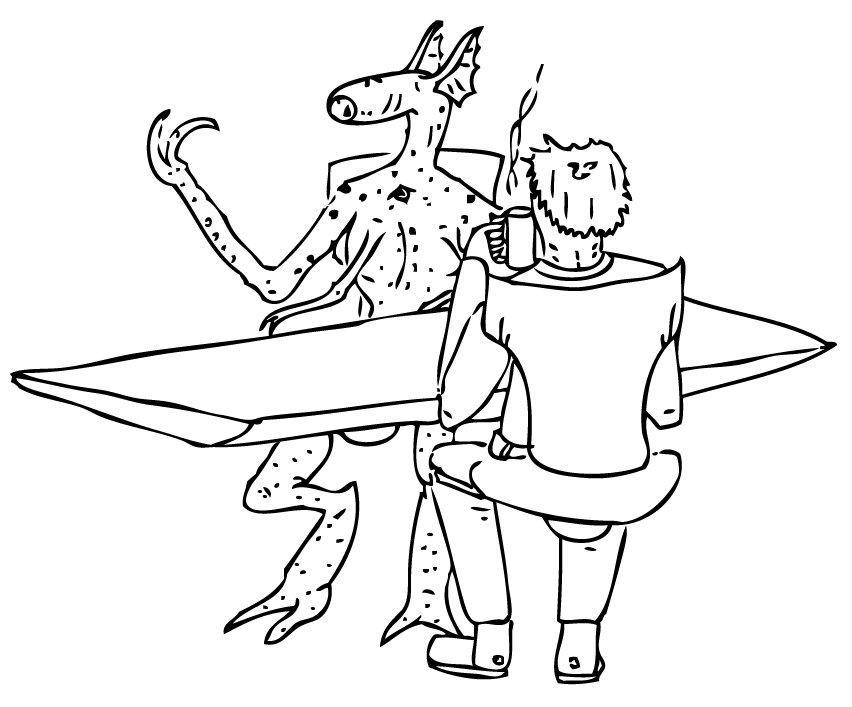 Good morning, Mr. Lindsay!” the large, imposing form of the creature Derek Lindsay had come to call Sam – simply because the damn thing’s gender was still an open question – greeted merrily in it’s heavy accent. Derek sighed and finished pouring his coffee, doing his best to ignore the alien.

“I don’t want to talk about it, Sam,” Derek grunted. The creature’s scales changed color and flashed as Sam pronounced its real name. “Whatever. The point is I’m not talking to you.” Sam turned a sad shade of gray as it retrieved a cup and filled it with water, frantically spooning sugar into it at the same time. Sam’s single, bulging eye focused squarely on him.

“Why not, Mr. Lindsay?” Sam asked, doing its best to sound hurt. “We always have such stimulating conversations. I can see no reason why today should be different.” Sam poured the sugary concoction into the orifice above its breast. Derek sighed as it sat opposite him.

“We have arguments,” Derek muttered, his spoon absently stirring his coffee. “Arguments I always loose, if I do say so myself.” Sam flashed an amused color or two.

“Arguments?” it asked, its scales fluorescing with laughter. “I would not consider our discussions to be arguments, Mr. Lindsay! You are my first human friend. I would never argue with you.”

“Remember when your sister came to visit?” Derek countered, his hand running through his graying hair.

“We got into that huge argument about her nanomachines.”

“Your government does not trust nanotechnology…”

“No, I don’t trust nanotechnology! You missed the whole point of the conversation!”

“And yet, it was indeed a conversation,” Sam tapped a finger against the table. “We do not argue, Mr. Lindsay. There is no competition when we speak; our encounters are simpl exchanges of information.” Derek sighed as he took a sip of his coffee. It was still too hot.

“No, they’re not,” Derek, grunted as he placed his cup back down and continued to stir. “We had opposing opinions on the lunar mining treaty. We had an argument about the ethics of manned missions through the untested hyperspace gate!” He leaned back as Sam shook its head.

“The gate was tested,” it replied. “The probes emerged intact.”

“That’s not what I’m talking about,” Derek half-shouted. “We shouted at each other for almost an hour before you finally convinced me – me! – that the gate was safe,” Derek ventured another sip, cringing at the heat. “All we do is argue, Sam. We argue, and I lose.” Sam placed all four of its hands onto the table, its ear folds collapsing to hang below its neck. It shook its head.

“My dear Mr. Lindsay,” Sam started softly, “we have never argued. You and I have extremely involved and interesting conversations, like friends would have!” It paused as he scoffed and took another sip. “I understand your point of view, Mr. Lindsay. You feel that, because I have always strived to offer alternative points of view, or that I provide more accurate information to supplement the data you possess and alleviate some of your ignorance, that I am arguing with you.” Sam’s ears perked up.

“Aren’t you?” Derek asked. Sam shook its head, one of its hands reaching for his.

“Of course not, Mr. Lindsay! Were I to argue with you, it would not be on friendly terms. Furthermore, my people only argue with their most dire enemies. In case you were unaware – of which I am most certain you are not – we do not consider humans to be our enemies. Your people are sociologically similar to ours, Mr. Lindsay. Many are naturally suspicious and confrontational, as I think you tend towards, but most are good-natured and open-minded. In all of our discussions, I have merely played what you would call the ‘devil’s advocate’ in order to provide contrast and create an environment of interest and depth for both of us to enjoy. You are still suspicious of me, I think; therefore, you assume that our encounters are thinly veiled displays of hostility and our conversations, arguments.” Sam turned a bright shade of red and clapped its two larger hands together. “But this is not true, Mr. Lindsay! We do not argue. You have never surrendered to my point of view and ceded the confrontation to me.” Derek looked up at the large alien and sighed.

“You really think so?” Derek asked. Sam nodded and lowered its arms.

“I do not understand the concept of lying,” Sam said with a hint of amicability, “so yes, I really do think so, Mr. Lindsay.” Sam patted Derek’s hand and stood up.

“I will see you in the office, Mr. Lindsay.” Sam said as it turned towards the door. Derek waved at the alien and took a sip of his coffee. It was the perfect temperature. He finished the cup.