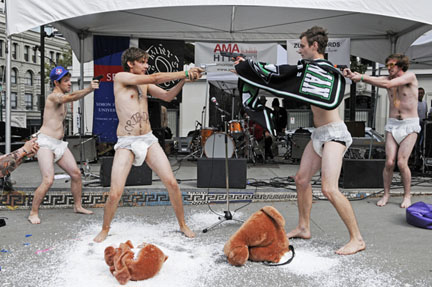 On September 5, after a year-long hiatus, the Victory Square Block Party, an afternoon of local music, comedy, and fundraising raffles for various Downtown East Side charities, made a comeback for the weekend before Labour Day 2010. A fixture on Vancouver’s alternative cultural calendar since 2004 or so, it’s a good way to spend a late, late summer’s afternoon (as I’ve done myself since 2008 or so). It wasn’t dark at all, or even overcast – it was perfect weather for an outdoor show all through the afternoon, nice and sunny.

I got to the park just in time to watch Sex Church open their set. I wasn’t feeling any stage presence and feared for the worse – i.e., their whole set, and perhaps the whole show, sucking – but they got better. Still, the sense of atmosphere and foreboding that made their MySpace tracks so compelling didn’t quite make it. Of course, you could argue that’s really just Joy Division copycatting at play here, making this a positive – the Ian Curtis vocal act swapped for a less pretentious, standard-issue nasal, snotty punk voice – but is that really an improvement? Don’t get me wrong – Sex Church was still pretty hot stuff – seriously.

Next up was the first of five comedic interludes, this particular one by a two-man act consisting of Toby Berner and Chris Casillan, of local sketch group Canadian Content, producing a send-up of the motivational self-help industry that would make Barbara Ehrenreich (author of alleged “anti-positive thinking” screed Bright-Sided) proud. With their “three-word program” (actually 4 words, despite …’s claims to the contrary), one can apparently solve problems ranging from fibromyalgia to not having any problems at all by “fucking getting over-it” – at least, that’s how Toby put it.

As if on clockwork, when Canadian Content closed their act by getting them to repeat the “three-word” slogan in affirmation, they were (jokingly) told off by the audience. Afterwards, one of the MCs, Cameron McLeod, remarked on the family-unfriendliness of the event thus far – apparently, there was a “flasher” in the audience before Sex Church’s set and Canadian Content’s “motivational talk”. However, the number of toddlers in the audience throughout the show seemed to belie McLeod’s commentary, or reflect on their parents’ attitudes and/or prudence in picking family activities (though, to his credit, one father thoughtfully brought what appeared to be industrial-grade earmuffs, for the sake of his kid’s ears).

The second musical act, Ora Corgan, was considerably more sedate. I don’t mean that in the sense of pedestrian or, worse yet, boring, however. Her band’s brand of wispy, gentle, yet perhaps vaguely psychedelic country-folk was quite enjoyable, and well-performed, especially considering that some seemingly intractable sound problems marred their early set. Indeed, the end of Corgan’s set was anything but boring.

After Ora Corgan’s set, Pump Trolley Comedy provided the second comedic interlude with their “Street Babies” sketch, a tableaux of gangbanger babies (played by the male members of Pump Trolley) committing various acts of gang violence, only to be pacified by the appearance of a pair of breasts the size of giant beach umbrellas. It could be described, perhaps, as being vaguely absurdist and also vaguely Freudian (what with the expression of the violent and sexual id as expressed, respectively, by infant gang warfare and the second pair of mammaries to appear during the afternoon).

The next band after Pump Trolley was Makeout Videotape, fronted by a young Edmonton ex-pat named Mac DeMarco. Demarco is a natural showman, with excellent stage presence and banter which still seemed genuinely warm and unforced, even as he spent the entire set affecting various accents between songs. The music itself more than keeps up with Demarco’s show, a symphony of sunny, uber-distorted pop songs, which manage to reveal glints of chiming chords if one listens through the thick, warm haze which pleasantly warbles Demarco’s golden voice. All in all, Makeout Videotape was easily the best act in this year’s Block Party, if not in all of Vancouver; indeed, it behoves you to check out their MySpace and other online material, which is just as representative of how great these guys are.

The third comedic act providing comedic interludes was Emmett Hall and the Bubble Orchestra, which also featured Cameron McLeod and Daniel Code, two members of locally renowned sketch comedy group Bronx Cheer. True to its name, the Bubble Orchestra performed bubble-themed musical comedy, telling a story of the reunion of three super-brothers, Dantron (representing Good), Zoltron (representing Evil), and Sean (representing Listlessness). After performing various antics in the audience (getting a couple to kiss, threatening people with bubble guns, standing around listlessly), fate brings the trio back together as Zoltron’s bullying of Sean leads to a climactic battle between good and evil, ended only by the wondrous creation of a big bubble and subsequent setting aside of differences between the three brothers. Despite some snags in the final act of the sketch (Cameron McLeod, who plays Dantron, had some trouble creating the big bubble), Hall managed to make even that entertaining, improvising an appropriately suspenseful keyboard accompaniment and narration until the bubble situation was resolved.

The next comedy act was Man Hussy, who presented a twisted take on Canadian history – who would’ve known there was an actual historical figure named Hudson Bay and that fur traders poached polar bears in Vancouver. This was to Bay’s chagrin and  started gunfights between him and the polar bear fur poachers.

Apollo Ghosts were the next band up. I’ve written about their (well-deserved) local following before, but the speed of which the crowd built up around the stage was still breathtaking. The Ghosts bantered and played their Modern Lovers-influenced pop and punk with as much gusto as always, bringing guests on stage and generally being up to their usual best.

The final comedian of the day was stand-up comedian Charlie Demers, who has written two books (an anthology of essays on Vancouver, Vancouver Special, and a novel, The Prescription Errors.) and was the host of The CityNews List before it was cut from CityTV’s news lineup with all the rest of its local news programs. Accompanied on stage by a “laugh track” of four guys, he made constant reference to the audience. By that, I mean he told hipster jokes (“a vehicle was reported and towed away – it was a fixed gear bicycle”), a strategy that backfired when his routine turned political. After one too many references to months-old skinhead protests and the Olympics, as well as a cornball joke involving hecklers at a pro-Palestinian rally, one audience member, feeling rather patronized by the combination of his hipster jokes and his political routine, took it upon himself to voice his displeasure quite literally in front of Demers’s face. Then again one wonders if this series of events was intentional, as the timing of the whole moment was spot on, despite the spontaneity of the whole episode – at least.