Vancouver knows how to throw a party, but whether or not those parties are legal is another issue. Themes of DIY culture, loud music and illegal venues were explored at the encore screening of documentary “No Fun City” on Sept. 4 at the Rickshaw Theatre. 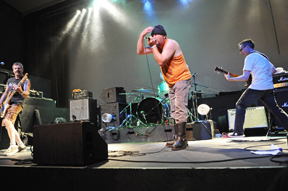 The Subhumans surprised supporters of the No Fun City cause as the bill’s “special guests” on Saturday Sept. 4 at the Rickshaw Theatre. Chris Yee // The Runner

Vancouver , or “No Fun City” as some call it, has seen a lack of entertainment and culture beyond what can be found in the Granville Strip and the Vancouver Art Gallery. Still, some manage to eke out an existence producing emerging culture–like those in Vancouver’s underground and independent music scene–jammed together in the dense city with sometimes unappreciative neighbours and, worse yet, locked in eternal battle with city ordinances to make (and perform) noisy art. When filmmakers Melissa James (a former Montrealite) and Kate Kroll (an Albertan transplant) came to Vancouver, they decided to make a film about it as soon as they settled in–and what better for their endeavour than to call it No Fun City.

The film’s website says the documentary is “a film about DIY culture, loud music, illegal venues and the war on fun.”

It is a series of vignettes and interviews tracing the trials and tribulations of promoters and performers in Vancouver’s underground. Seemingly impressionistic at first, a survey of reactions ranging from the not-so-quiet desperation of the Cobalt’s Wendy Thirteen, as well as the Rickshaw’s David Duprey and Malice Liveit (formerly of the Sweatshop) in dealing with “slumlords”, misunderstandings with their neighbours, and misunderstandings with the city, to  the fuck-it-all hipster insouciance of the various conspirators involved with the Emergency Room (one of them, Keith Wecker, who originally started the venue by putting on shows in an underground parking lot near the Emily Carr Institute [now University] of Art and Design back in 2006). A clearer picture of the situation and its possible solutions emerges as the film progresses. There are really no clear answers, but apparently the filmmakers intend No Fun City to be a call-to-arms of sorts, which it just might be if one is so inclined. Indeed, judging by the hefty group attendance, many seemed partial to the cause.

The Safe Amplification Site Society, a group of local musicians and artists raising funds and who support for a legal, permanent, all-inclusive and all-ages venue in Vancouver offered buttons of various designs in exchange for donations.

Of course, what’s a fundraiser show without an actual show? The concert kicked off with a trio of the current crop of Vancouver punk bands. Vapid played the first set solidly, though coming dangerously close to sounding just like Hole in the second half of their set. The normally dark Twin Crystals, who actually seemed in pretty light spirits on stage this time around, played the second set.

Defektors started the third set with a clean sound, but got progressively dirtier as they got closer to their garage-punk roots toward the end their set. Next came Vancouver punk veterans The Furies (who played “Vancouver’s first punk gig” in 1977) and then, of course, the legendary Subhumans, billed as the show’s “special guests”. Between the two bands, the night closed off with appropriately solid sets, bringing everything back down to its roots: a veritable celebration of the Vancouver underground music scene.