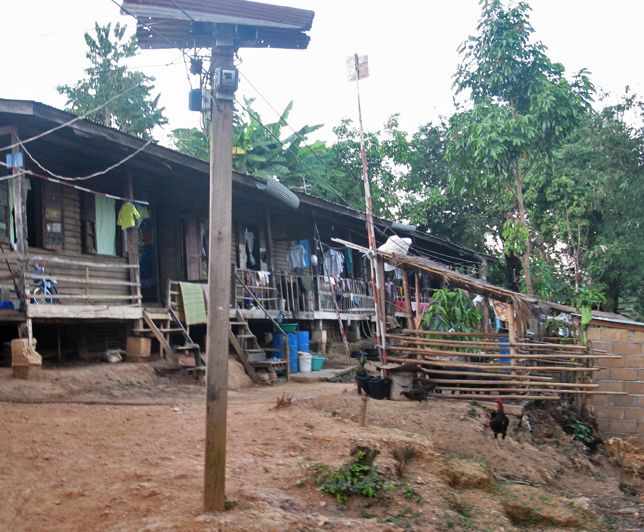 Myanmar is a country shrouded in mystery. Formerly known as Burma, Myanmar nestles between the economic powers of India and China, while also sharing borders with Thailand, Laos and Bangladesh; it remains a path less travelled. This is mostly due to the lack of reliable information leaving its borders because of strict regulations imposed on the media by a brutal military regime. This coupled with long running civil wars, child soldiers, ethnic cleansing, and a roaring methamphetamine trade has made it an uncommon destination for international travellers.

I came to find out about this country in the 2008 film Rambo, in which the main character enters Myanmar to rescue a group of missionaries captured by the ruthless junta. It caught my interest and I found myself searching for any information available on the country and its reclusive dictatorship.

A year later I found myself crossing through the northern Thai border town of Mae Sai and entering the bustling Burmese city of  Tachileik. This city has a poor reputation in Asia for being a hub for criminal activity, whether it be the sale of endangered animal parts, fake goods, or chemical drugs produced by armed ethnic groups.

I had no problems and in fact encountered some of the nicest people anywhere in my travels. This friendliness and curiosity was sadly overshadowed by the grim reality that these people are essentially imprisoned in their own land. Freedom of speech is non-existent and I was cautioned immediately upon arrival to watch who, and what I talked about in public places; trashing the government in a bar or restaurant may land you in jail, or at best on the first flight home.

I didn’t allow this to dampen my experience and set out to understand the conditions these people live in to the best of my ability. I was fortunate enough to meet a young Burmese man named Bruno upon my arrival; he spoke English well.

Within minutes we were having a beer in a roadside tea-house and with a little convincing he agreed to show me the rural slums outside of the downtown core. The market and downtown area are the extent of what most international visitors see but I longed to see more.

Bruno led me through a labyrinth of back alley ways and towards a steady slope that made its way past a military base and up into the jungle. We climbed along a rustic path, with makeshift wooden steps occasionally dug into the dirt hillside. After several minutes of hiking through the brush buildings began to appear.

There were hundreds of crude wooden structures carefully place on the slope, some large and newer, others small and rotten. Regardless, these people definitely live below the international poverty line. Dogs and chickens wandered freely while local women burned garbage out front of their make shift homes. I refer to these homes as make shift due to the fact most appeared to be made of scrap lumber and metal and were in no way modern. I followed Bruno to his small home where I had the chance to meet his sisters and father and see his living conditions first hand, something I will always remember.

Around 8 o’clock Bruno and myself made our way to the golden Stupa, or Pagoda, in town. A Stupa is a Buddhist monument, mound-like in appearance, often with a tall pointed top rising high above the ground. I had seen plenty in Thailand and I figured this one would be no different. I was wrong. The Stupa was massive and covered in gold leaf; it was visible from all over the city, shining brilliantly in the dark night sky.

We hiked up a long paved road to the golden monument, passing cigarette vendors and handicraft merchants as we went. Bruno led me to the entrance of the holy site, a large gate, with a breath taking view of Tachileik. I removed my shoes, something that is compulsory at Buddhist holy sites, and followed my new friend to one of the eight prayer sites situated along the base of the Stupa. There was one for each of the seven days of the week, with two for Wednesday, making a total of eight prayer stations; each one represented by a different symbolic creature (the rat, the dragon, etc.). Bruno led me to a small stone dragon staring out from the base of the golden mound. It was the symbolic representation of Friday, the day of Bruno’s birth. He walked me through the traditional prayer practices and explained to me the various meanings to each day and its representative creature or spirit.

I left the Stupa feeling enlightened and with a better understanding of this ancient religion and its unique practices. Its reasons like this are why I travel in the first place.

I left back to Thailand the following morning after a cold, frothy Myanmar Beer, (the country’s staple alcoholic beverage) and a bowl of questionable pork and fried rice. Bruno saw me to the bridge joining Myanmar with northern Thailand and after an emotional goodbye, I promised to write and at some point return to see him; something I still plan to do.

As I walked across the bridge toward the Thai customs booth I found myself lost in deep thought. Myanmar had always fascinated and frightened me but after my trip to Tachileik I had a new found respect for these people and the oppressive conditions they live their day to day lives in.

Would I recommend this trip for a honeymoon? No. Would I recommend Myanmar to a respectful and adventurous backpacker? Definitely. The lack of western influence, the remnants of ancient practices and beliefs, and the wonderful spirit of the Burmese people make it a place that will always remain close to my heart and in the forefront of my mind.