A homage to steampunk: The 35th annual Vancouver sci-fi and fantasy convention 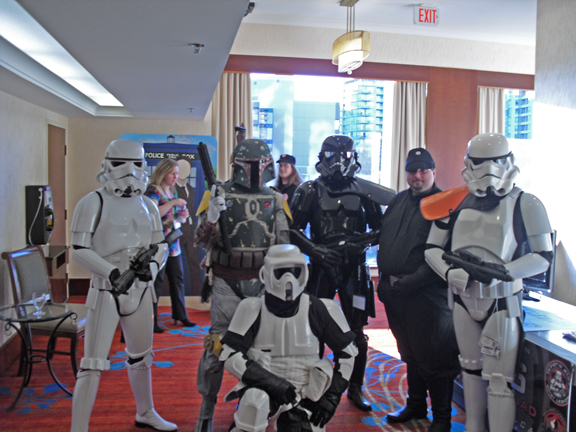 From Alchemy to Zeppelins was the theme of this year’s Science Fiction and Fantasy convention, which took place in Richmond from Oct. 1-3. The convention was all about the little known genre of a special kind of science fiction: Steampunk.

For those of you who don’t know, Steampunk is Victorian-era science fiction. More eloquently, this means that Steampunk is the area of science fiction that tries to answer the question; what would have happened if the steam engine continued to be developed and the gasoline engine failed to ever make it off the drawing board? Most Steampunk epics are alternative history explorations that follow fantastical gadgets pioneered by eccentric victorian characters that often get into fascinating socio-technological adventures.

“Steampunk needs historical accuracy like a dirigible needs a goldfish,” says Diana Vick, a visiting Steampunk enthusiast who also runs Steam-Con down in Seattle. Even 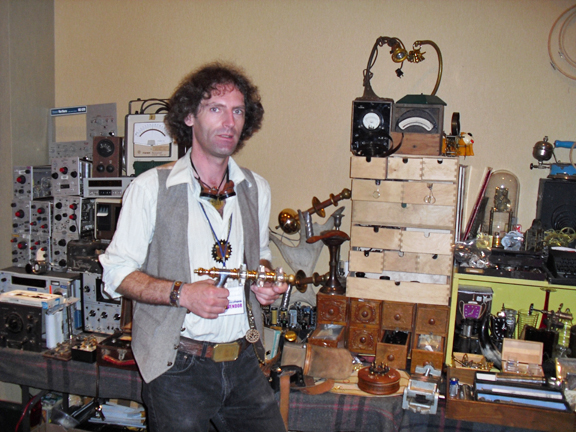 A steampunk inventor at VCON. Jared Vaillancourt // The Runner

though most Steampunk works are set in the 1800s and early 1900s, it’s all about the adventure of the Victorian high technology and the people who work tirelessly to develop it.

“If you’re not having fun, you’re doing it wrong,” is the motto of the VCON, which was reinforced by esteemed Steampunk author of Dreadnought, Cherie Priest.

The convention is run by the fans for the fans. At a glance, it’s clear that the hundreds who gathered at the convention knew what they were doing. From the art gallery to the seminars, from the book readings to the dealer’s floor, there was a distinct and palpable atmosphere of kinship and excitement that made it impossible not to have fun this weekend.

Scientists associated with NASA came up to enjoy the convention, including Eric Choi, who co-edited and wrote the short story, The Son of Heaven for the Chinese-

Canadian sci-fi anthology The Dragon and The Stars. The accomplished engineer, who works for an electronic company that makes products for NASA, created an alternate historical tale in The Son of Heaven. The story is about a famous Chinese rocket scientist who gets caught up in American anti-communist hysteria in the 1950s.

In addition to authors, sci-fi artists were prevalent at the convention. From the eccentric and brilliant James Beveridge, whose fantasy pieces netted a handsome sum during the auction; to the reserved and comical Lynne Fahnestalk, whose creates pictures with hilarious play-on-words and silly juxtapositions. Fear no art! proclaimsFahnestalk, whose pieces include Toad-al Eclipse, which features robed toads praying to a blackened sun.

VCON was about more than just Steampunk. Members of the 501st Legion, a group of Star Wars fans equipped with realistic and painstakingly produced Stormtrooper armor, were also present to promote their charity events, and of course, possibly recruit. If you received an Imperial Citation, don’t worry – there’s no fine so long as you pledge your loyalty to the Emperor!

“Quotes are so pretentious!” Danielle Stephens, the chair of VCON for the fourth year, says with a smirk. Her attitude is spot on the money – the VCON is about celebrating things that are not of this world, and pretentiousness does not fit in. Science fiction has never been about what could be, but about what could be imagined, and VCON is the place where all these visions come together and reach out to the minds of others. Steampunk is an excellent example of this ideology, which is why Danielle personally chose it as this year’s theme.

“We’re all modern dreamers,” says Heather Dale, a traveling musician and songwriter. Music is an important part of the celebration, and Dale’s self-titled filk, science fiction folk music, band were special guests at VCON’s Friday concert. After 17 years of performances all around North America and Europe, her band still manages to capture the spirit and energy that was prevalent this weekend.

The convention attracted the stars themselves. Science fiction veteran actor Robert Picardo arrived on Sunday for an impromptu seminar and autograph signing. Picardo is famous for his role as the Doctor on Star Trek: Voyager, and more recently for his role as Richard Woolsey in the Stargate series. Even though the sci-fi legend couldn’t stay for long, he did manage to let loose a few anecdotes, which recounted the glory of his long career. A lucky few even got to hear his own filk music as well as an autograph signing.

Some rising stars were also present at VCON. Soon to be big names, such as actor Danielle Golden and writer Alyssa Ciccarelli, had booths where fans and aficionados could sample their  newest media.

Ciccarelli, who co-wrote an episode of the upcoming web-series Riese, spoke about the premise of the series, which follows a young girl who is on the run from a religious troop. Filmed right here in Vancouver, it includes some big names from the science fiction community.

Golden, who is at VCON for the first time, acts in the sci-fi channel hopeful Border Guardians of Ackernon, where she plays the role of a bold warrior-assassin who finds herself custodian over a group of campers transported from our modern realm to her medieval one. While not a part of the TV guide yet, the series’ debut at VCON was sure to have perked some higher authority’s interest.