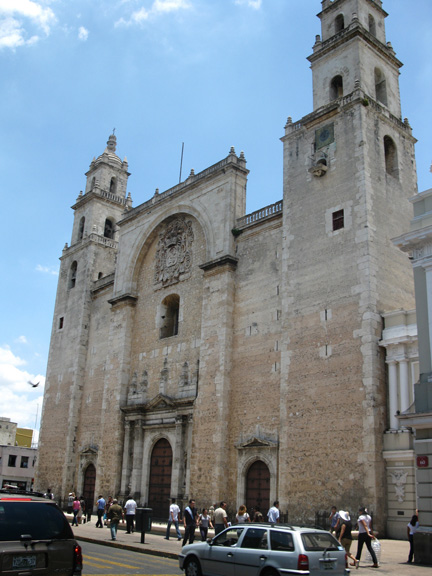 Merida is truly a city of two distinctly different worlds. There is an undeniable European feel to the city, largely because the majority of the buildings were built in a colonial Spanish style of architecture. This makes it unique and beautiful to explore. The second world has remnants of the ancient Mayan civilization, a culture that still fights to find its place in the modern world.

This struggling identity is what makes Merida such an amazing place to experience a unique and slower paced Mexican lifestyle.

Unlike its neighbour cities of Cancun and Playa Del Carmen, Merida is off the beaten track as far as travelling Mexico goes. Located in the Yucatan Peninsula, roughly a 5 hour bus ride from Cancun, it offers a far less touristy vibe. This was welcomed by myself after being stuck in the tourist-trap cities to Merida’s east, for here I felt I could explore the back streets and markets without the well seasoned hawkers bothering me. Of all the cities in the world I have had the pleasure of seeing I have to admit Merida is one of my favourites.

The amazing architecture is something worth seeing in itself; old limestone buildings, some hundreds of years old, are everywhere. Most were built by Spanish colonizers from stones stolen from Mayan cities and temples that stood where present-day Merida now stands. One such building is the Catedral De San Ildefonso, a large cathedral located in the downtown plaza. Construction began on the cathedral in 1561 and was finished in 1598. This is a must see for anyone spending any amount of time in Merida, its open to the public seven days a week from 6am-noon and 4-7pm.

If you enjoyed Catedral De San Ildefonso then you may enjoy a day trip to the world famous Mayan ruins at Chichen Itza. Even for someone not interested in history, Chichen Itza is breath taking. The immense size of the ruins and the complex astrological understanding exhibited in many of the structures is something I found mind boggling and definitely worth a look. The crowds at the ruins can get big, so I’d recommend checking it out early in the day or during the tourist off-season if possible.

Highlights here include El Castillo, or the Pyramid of Kukulcan, which was built in 800 AD and stands 25 metres high. The great ball court, Gran Juego de Pelota, is also something worth checking out while visiting Chichen Itza. It is one of the largest in Mexico and the largest of eight ball courts at Chichen Itza, highlighting the importance of sport to the ancient Mayan people.

If history and architecture is not what you are looking for then possibly one of Merida’s clubs or bars is what you need to unwind. The night life in this city is no disappointment, with several major clubs and dozens upon dozens of pubs, there’s a watering hole for everyone. One of my top picks would be KY60, a nightclub located in the downtown core. It is open daily between 9pm-3am and offers free pool as well as all-you-can-drink specials starting at roughly one hundred pesos($10 CDN). If you’re not interested in clubbing, there are countless alcohol-serving restaurants and pubs throughout the city. Consume some liquid social-lubricant and these establishments are a great place to meet other travellers and local folks.

There are also plenty of opportunities to shop for unique Mexican handicrafts in markets and shops throughout downtown Merida. Aside from the regular goods you’d expect to find, like Mexican silver and tequila, you can purchase some of the best hammocks in the whole of the Americas. Not only do hammocks from the Yucatan exhibit the utmost quality, they are also extremely affordable. Some of the best quality, and priced, hammocks come from nearby prisons. If you aren’t up for such a depressing and intimidating trip to get your hammock then check out some of the local suppliers. Hamacas El Aguacate produces excellent hammocks at fair prices, no need to worry if you are being ripped off here.

Leaving Merida was the hardest part about travelling there. When I first visited Merida it was so hard to leave that I actually extended my stay by two days to enjoy more of city. I recommend anyone who goes here allots at least five days to exploring the city and its outlying areas. It’s a side of Mexico I think every traveller should see, it throws all conventional trips to Mexico out the window.