Waiter... why is there pink in my beer?

My love for flavored beer first developed when I started a serving job at the German influenced bistro, Uli’s Restaurant. I had heard some old-wives-tales in regards to this sweet colorful delight but I could never bring myself to believe such a fabricated fable was true. Some told me it came in strawberry, some claimed it came in raspberry, some were even bold enough to say there was a chocolate beer roaming around out there. 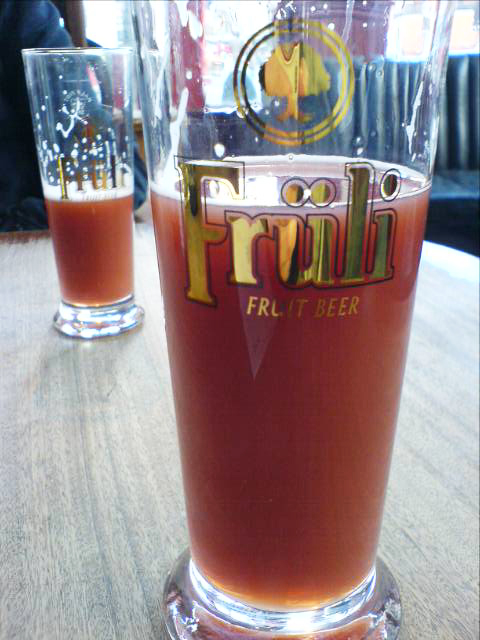 Of course, my first reaction was to smack these filthy liars straight in their brazen mouths for spreading such lies about the dignified world of beer. But once my reluctant lips hit my first Lindeman’s Framboise (a raspberry Lambic beer from Belgium) the lies soon turned to love, and from that point on I opened my mouth and heart to the very colorful, underground world of flavored beers.

It turns out that Europeans have been fans of fruit-flavored beers for centuries (of course those lucky bastards get to try everything first). So, if it’s good enough for the Europeans then it’s definitely good enough for me.

Once I was introduced to this new genre of beer, it slowly started popping up everywhere I went. The Central City brew pub comes out with their annual Red Racer Pumpkin Ale every fall. The ale has a golden color and the flavor is extremely subtle, which is a huge difference from the Belgian fruit beers that taste more like flavored iced tea than they do beer. I have also spied some interesting flavor concoctions on the liquor store shelves, like banana bread beer, coffee porter and cookie ale (which make me want to toss my cookies after one sip).

All other beers aside, my personal favorite is the Fruli strawberry beer. I first experienced this glass of pink frothy sex when I visited the Belgian Vancouver favorite, Chambar.

Interestingly enough, it is one of the only Belgian fruit beers I have ever seen on tap. It is also one of the lightest in flavour I have encountered. Fruli is a beer that could be enjoyed daily, but some of the heavier lambics can make you feel like you have scarfed down a thanksgiving dinner complete with dessert.

So, if you are growing bored of the silver bullet or tired of watching lame Corona commercials where a disgruntled wife shakes up her husband’s cool one as punishment for ogling a certain sexy passerby, then expand your brewskie palate and give one of these fruit beers a try.