For the second year in a row, students from Kwantlen Polytechnic University’s Fashion and Technology program are finalists in the 2011 TELIO Design Competition.

Earl Mabaquiao, Laura Nickel and Kristen Yip were up against 429 submissions from 21 design schools across Canada, they are three of the remaining 25 finalists. 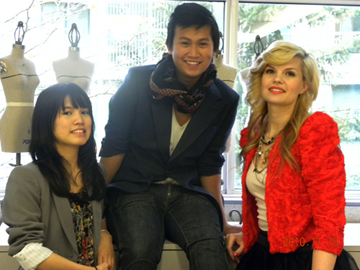 All finalists will have to prepare a garment of their own design based on design sketches from the preliminary selection process. These garments must follow the theme “the Great Canadian North.”

Their creations will be put on the runway during Montreal Fashion Week for a chance to win one of five $10,000 scholarships. The winners will be announced in March.

“Last year we had two third year students who were finalists in the competition,” said Micheal Pope, a KPU design instructor and competition liaison. “The TELIO Competition has only been open Canada-wide for three years, including 2010-2011.”

The TELIO Design Competition is organized by the textile company TELIO, based out of Montreal, and is an annual event open to design students Canada-wide.

“The students are introduced to the project very early in the fall semester, all second and third year students are invited to participate,” said Pope. “This year we had 16 students participate and we sent seven submissions.”

“The Kwantlen Fashion Design and Technology Program is very proud to have three design finalists this year,” said Pope. “To have three of the 25 finalists from our university speaks to the talent of our students.”