A highway to the world’s end

When the pavement turned to dirt, and the truck began to rumble, it was official – we were on the Dempster Highway, the final frontier of highways.

I had heard many horror stories that this road will beat a vehicle, or worse yet, beat the driver. In retrospect I’m not entirely sure how true these stories are, but they intimidate even the most confident drivers. Travel on gravel isn’t for everyone.

The Inuvik Attraction and Service Guide calls the Dempster, “both a challenge and adventure, especially for tourists that visit during the summer months.”

The Dempster Highway runs from just south of Dawson City, in the Yukon Territory, across the Arctic Circle and onward to Inuvik, in the Northwest Territories. My father and I had been planning this trip for some time and a surreal feeling hung over the first few minutes of the drive north.  This feeling was quickly replaced by excitement as I realized that we were venturing into one of the most unique ecosystems on our planet. 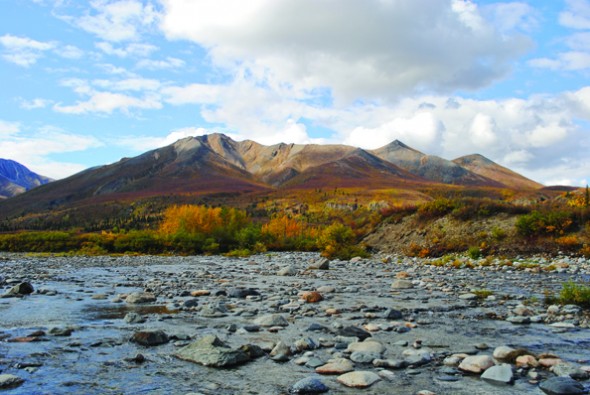 Just another beautiful mountain vista as seen from the headwaters of the Klondike River. (Matthew Bossons / The Runner)

We started our drive passing through the majestic and awe inspiring Tombstone Territorial Park, famous for its mountain vistas, vast tundra and abundant wildlife. We stopped for lunch within the park, along the Blackstone River, where I had the chance to cast my fly rod – with epic success: two arctic grayling.

After lunch the drive continued north along the Ogilvie River and to the Eagle Plains Plateau where we spent the night at a simple campsite behind the rustic restaurant and motel located there. Since it was mid-August, and because we were just below the Arctic Circle, darkness came late – very late. This was also the first night it became apparent how cold it could get this far north.

The next morning our party awoke early and headed back onto the road. Our next stop was the Arctic Circle for a photo-op next to the sign marking this remote destination.

We had barely made it five minutes down the road before spotting a large male grizzly bear grazing on a nearby hillside. This would be the first of three grizzlies we would see along the Dempster.

When we stopped at the sign and exited the truck we were met with a view like no other. Vast tundra stretched out in all directions, meeting rolling hills and mountain peaks, wide valleys and frigid creeks. Small shrubs are the dominant vegetation here, at least until you reach the Mackenzie River delta.

After taking the obligatory photo at the sign proclaiming the Arctic Circles longitude and latitude, it was back into the truck for another push north.

Our white truck carved its way through the tundra, cruising along the gravel highway towards the end of the world. Fascination had gripped me the whole drive, what would Inuvik look like? Would it be worth the long, bumpy drive?  The answers would have to wait.

We realized the home stretch was in sight when a large white-and-blue sign became visible on the horizon. “Welcome to the Northwest Territories.”

Only two towns, two ferries and 272 km stand between the border and Inuvik. Almost there.

We crossed the Peel River ferry in early afternoon and continued up the road to the town of Fort McPherson. It’s a small town, and our only reason for stopping was to pick up fishing licenses from the local government office – new territory, new licenses.

Next, our drive north from Fort McPherson took us to the banks of the Mackenzie River, at its confluence with the Arctic Red River. Here we took a ferry past the town of Tsiigehtchic and on to the other side of the river, where we continued up the Dempster towards our next stop – Inuvik.

We drove a short distance up the road to stop for dinner. Like so many stops before this one, my father and I suited up to go for a quick fish while my mother prepared dinner. My girlfriend accompanied us down to the bank of a small river where we made a concerted effort to catch some more grayling, unfortunately we had no success this time.

As we sat in the camper and ate our dinner we watched out the side windows as lightning lit up the evening sky to the south. Thunder echoed over the tundra and we could see rain falling in sheets only minutes away.

The four of us rushed through our meals and got back in the truck, we had to stay ahead of the storm because it would turn the dirt road into a muddy mess. The race began with the storm right on top of us, but as we pushed north it seemed to dissipate and we made it to Inuvik safely, shortly before 10 pm.

The town was completely different than I had imagined. It was small, but modern and full of colourful houses and apartments. The locals were friendly, and the Inuvialuit culture was visible at every turn.

I had a great time in Inuvik, but that’s another story.

The Dempster Highway is a drive like no other. Its difficulty is often exaggerated, at least as far as I’m concerned, but its beauty is unsurpassed. It’s a landscape that few people see, and it’s truly a shame because it’s arguably one of the most impressive landscapes that Canada has to offer.