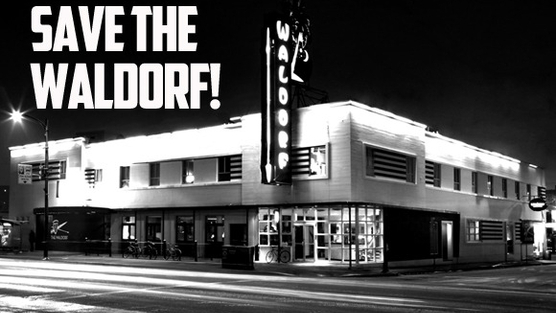 Greater Vancouver’s coolest cried bitter tears of disappointment, and called bullshit on the city’s worship of the golden calf through petitions and public rants. Even mini-celebs like Grimes tweeted that Van has, “destroyed nearly ever piece of culture [it] had.”

What’s a Lower Mainland hipster to do? In a place nicknamed No Fun City, the Waldorf was one of the last hangouts available to the anti-Granville crowd.

But, fear not: Certain venues are working to fill the void.

The Cobalt on Main has started hosting “Come Friday” every Friday, with a live show, DJ set and $8 double highballs, all for free cover if you can drag yourself there by 10:30. Notable upcoming bands include Sex With Strangers, BESTiE and James Younger.

Across the street is the Electric Owl, who will also be cutting broke students slack with free live bands every first Wednesday of the month. Dead Ghosts kicked things off for February, and I, for one, wouldn’t have minded paying. In fact, it was so good I kinda wanted to stuff dollar bills in their pants.

If you feel similarly inappropriate urges toward your fave local musicians, many of them will soon be vulnerable and open to the public, DJing with Adam Fink and Jason Corbett at Save On Meats’ “Common Courtesy.”

Every Saturday, bands will stop by the Hastings diner to spin records out of the courtesy of their hearts. Did I mention it’s free too?

Main Street’s Zoo Zhop remains one of the best, but most underappreciated spots in Lotusland to get sticky moshing to acts like Shearing Pinx and The New Values. (Just make sure not to squish James Bond, the resident cat.)

If that still isn’t enough, the Biltmore Cabaret and Rickshaw Theatre are still as worthwhile as ever.

So you see? There’s hope yet. You just have to know where to find it.