Do you enjoy beating the shit out of people but are frustrated at the lack of legal avenues to pursue your predilection? Then come on down to Dog Brothers, a Canadian-started martial arts group dedicated to no-limits, stick-fighting duels. In the Dog Brothers, you will be taught Eskrima, a Filipino weapons-based martial arts system. Available implements range from the typical choices, such as swords and spears, to the more exotic, such as the Filipino ginunting: a sword that curves away from the wielder like an extended claw. Dual-wielding is permitted, as member Chris demonstrated during one of the Vancouver chapter’s weekly Sunday meet-ups. For one sparring exercise, he chose to accompany his ginunting with a daga – a Filipino dagger with a very short, zig-zagged blade – in his left hand. Is this two-pronged approach more effective than the singular kind?

“Not really,” Chris says. It definitely looks cool though. 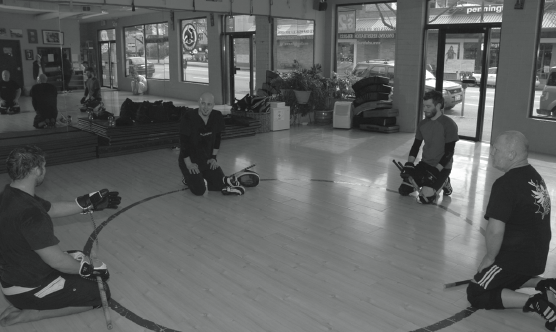 According to Loki — one of the club’s chief instructors who renamed himself after the trickster Norse god because of his similar appetite for chaotic processes, like the Dog Brothers — Chris is the best fighter the chapter has. In the recent gathering — the name of the international tournaments the Dog Brothers holds – in Montreal, Chris broke the thumb of fellow Vancouverite Brad in a showdown, which explains the latter’s absence from the meet-up I attended. This incident is one of many empirical justifications for Chris’s nickname “Lazy Dog” — not because he is lazy, but because he uses a slow but very powerful fighting style. Every fully-ordained Dog Brother assumes a similar title; Loki’s is Tricky Dog.

Unfortunately for me, I naïvely chose to attend a rather subdued session. “After the gathering, things really ramp down and people try to take it easy. Leading up to a gathering is when things get strenuous because people are trying to prepare,” says Loki. Which is why only four people showed up and no full-on duels occurred. Instead, you had the dance-music-driven cardio workouts and partner technique-exercises of more typical martial arts schools’ regimens. The technique exercises were interesting to see; the paired-up members formed mini, tornadic flurries of dual-baton strikes and counter strikes, darting all over the training area in a constant ring of wood-on-wood clashing. It was still “probably the tamest I’ve ever seen it,” said Chris, who has been a member for 14 years. Despite the session’s highly-anomalous nature, it did culminate in a “3/4” scale intensity match between Loki and the late-arriving Jacy. Even at this level of reservation, the melee was ferocious, ending with Loki pinned to the floor because of Jacy’s superior, Jiu-Jitsu-honed ground game. Jacy proceeded to give Loki a few light clubs to his consternated face before Loki tapped out.

Full-scale fights typically last a few minutes; the only mandatory pieces of protective equipment are used fencing helmets received from fencing clubs. These clubs have no more use for the helmets, as their dented masks do not adequately shield the wearer from the thrusts that fencers use, but they appear to be adequate for the more arced blows of the Dog Brothers.

Before they don these masks, the combatants must sign a form stating that they will not sue each other or the club for any bodily damage that may occur. Loki says it hasn’t ever really been an issue as no one has ever left a fight that disgruntled. In fact, a lot of the time the participants hug each other afterwards. “We vow to be friends afterwards, and everyone leaves with the same IQ they came here with,” he says.

Unfortunately, if you enjoy armament diversity, most of your choices come in exclusively metallic varieties that cannot be used in duels. They are good for practice, though, because their huge potential for causing damage helps to instill the point that dodging blows is a more important skill than trying to increase your capacity to withstand them, says Chris. You can understand the real-world applicability of this principle, as there is not much point in learning how to bear a knife prod.

For the fights, you’ll have to settle for a generic wooden alternative, made out of rattan wood, a solid kind of bamboo. You can still do some serious damage with these sticks, though not as much as you’d think. Loki swears that grappling is the most injurious aspect of the activity, of which the worst consequence he’s seen has been a torn ligament. That’s hard to believe when a Dog Brothers slide show displayed on a wall-mounted TV portrays a close-up of a man bleeding profusely from the head after a vicious down-strike. And yet, despite the injury, he evinces a serene, blissful smile under the waterfall of blood pouring from his forehead.

And this is really what the Dog Brothers is all about: training you to keep a calm and rational mindset in intense situations. The practice itself might seem a little too extreme and daunting for some, but as Loki says, “it’s like walking through an airplane propeller and finding yourself on the other side thinking ‘Huh, how the hell did that happen?’” It helps explains the organizations motto: “Higher Consciousness through Harder Contact.”

All this inurement doesn’t induce a psychopathic blood-lust in the participants.“These guys are teddy bears,” says Stas, the oldest member present and owner of a massage parlour. Stas says that very few of the brothers have actually used their prowess outside of the organization and have no desire to. Still, he thinks that it’s a good idea to attain such skills when it is easy to come across volatile, testosterone-possessed young males in the real world.  Loki believes that his training has helped him confidently diffuse situations when a confrontation threatened to break out into a brawl.

So if you feel the Dog Brothers is something that might sate your more pugilistic tendencies, or you’d like to spectate from a safe distance, check out their website: http://dogbrothers.com/.