Fashion with a function

Fourth-year fashion design student Taylor Byrom is aiming to start a new trend at this year’s Kwantlen Fashion Show. The born-and-raised British Columbian is in the midst of finishing her line Jolie Hart, a collection of clothing for young girls who have special physical needs as they battle illnesses. 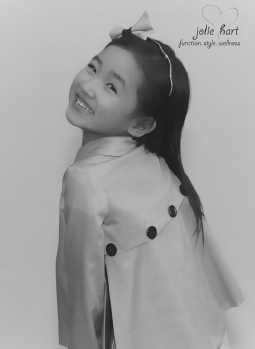 When her grandmother — whom she refers to as her “Nana” — fell ill, Byrom’s life changed forever. This inspired her to reach out and help others in similar situations. She started by volunteering for the BC Children’s Hospital’s Miracle Weekend — a two-day fundraising event held at the hospital.While there, she started to understand the role that clothing plays with sick people, in particular children, because of her experiences with them and the concurrent ones with her grandmother. Their clothes start to fit differently, and it can be hard to find clothing that hides needle marks while not impeding hospital machinery.She noticed that the apparel market had a lot of clothing for sick adults, but there weren’t nearly enough options for sick children; it’s an area that gets overlooked, especially when it comes to finding something that looks good. She wants to make clothes that are not only functional, but fashionable, and says that while kids “just want to fit in, other kids can be mean … [Custom clothing] helps with that child’s selfesteem, and makes school a bit easier and helps hide what’s going on.”Q: What inspired you to use the name Jolie Hart for your line?

Q: How are the clothes constructed differently from other children’s clothes?

A: They’re pretty much constructed the same; it’s just that it’s softer fabric. So the fabric quality is definitely different, and the general placement of things is different. It’s really just adding things, but the general construction is the same as pretty much everything else. The pieces are made out of soft organic cotton and bamboo that is easy to care for and machine-wash warm… the point of this clothing is to make it last as long as possible; it is not throw-away or fast-fashion. They are meant to be worn and loved, but they still need to be taken care of.

Q: Has anything like this been done in the show in the past?

A: No, there was one girl a few years ago, and I think she did clothing for girls with eczema, but not really. I would say it’s the first medical care line for kids. I think there’s been a senior’s line that was kind of similar, but for children, it’s one of the first, which is exciting.

Q: What are some highlights you’re looking forward to at the fashion show, for yourself and as a whole event?

A : I’m looking forward to actually being that person. I’ve been going to the show for about six years, and seen these graduates and thought about how glamorous they look and watching them on stage thinking, “Oh, I want to be that.” So, I think to finally be that is going to be amazing. I’m going to have to remember to take a breath during the day and just soak it all in because I know it’s going to be a fast day. This year, there are two shows and not three, so I’ll have to really savour these two shows.
Byrom has been teaming up with both BC Children’s Hospital and Canuck Place to create a product that will have the biggest impact.

Byrom shared that she has had feedback from parents all over the world, and says that she would like to launch her line sooner rather than later because “I’ll have the show, I’ll have the launch, and the press that follows that. And right now, I have the interest from these people and these organizations that I’ve worked with. I think it’s important to go while it’s hot; I don’t want them to forget me.”