The presence of a pro-life club at the summer semester’s Welcome Week marked the emergence of an organized anti-abortion movement at Kwantlen.

Protectores Vitae made headlines in late 2012, when it threatened legal action against the Kwantlen Student Association (KSA) after being denied official club status. Protectores Vitae is now an official, funded club. Its display on May 7 was the club’s largest public action to-date.

Despite the controversy surrounding Protectores Vitae’s formation, its member’s interactions with students at the Langley Welcome Week festivities were free of conflict. There were no graphic images as part of the club’s display, which relieved pro-choice students.

Founder Oliver Capko says the low-key approach of the group at Welcome Week was designed to help them fit in with the celebratory theme of the event.

“You don’t want to just go in there and kind of wreck it or be offensive to anyone on Welcome Week,” he says.

Capko is also keen to mend relations with the KSA and demonstrate that Protectores Vitae is part of a healthy dialogue on campus.

“We’re open to whatever … means”

As Protectores Vitae develops, the initial calmness may be exchanged for more forceful tactics.

“I’m not going to say that that’s not in our consideration: using graphic images and whatnot,” says Capko in an interview with The Runner.

“We’re open to whatever we deem to be an effective means to get the message and the reality of abortion out on campus.”

That whatever-it-takes attitude has Arzo Ansary, the women’s representative for the KSA, concerned.

“Graphic content would create a lot of difficulty for our students,” Ansary says.

She believes that Protectores Vitae’s presence on campus could be triggering and traumatic for students which would be “clearly unacceptable.” It’s evident that tensions between the student union and the club have not fully dissipated.

Threatened with legal action, the UVSS reversed its decision. A year later, the anti-abortion club was disciplined again by the student society according to The Martlet, UVic’s student newspaper. YPY members had launched a campaign with signs that featured pictures of aborted fetuses and the word “choice?” on top.

Protectores Vitae’s future relationship with the KSA and students will depend on what materials it deems to be appropriate in spreading its message.

Protectores Vitae’s main focus at welcome week was sex-selective abortion, which Capko calls gendercide. He was happy with how the approach went over with students.

“With the issue of gendercide, or sex-selective abortions, most people are concerned and most people are against it, in one form or another,” Capko says. “So the response was generally pretty good.”

The anti-abortion movement in Canada is undergoing a rebranding, according to a recent CBC article. Rather than appealing to religious-based ideas of right and wrong, the contemporary anti-abortion activist uses the language and rhetoric of human rights. The focus on protecting the lives of unborn females is a way in which anti-abortionists try to parallel feminism.

But feminists at Kwantlen aren’t thrilled by an anti-choice group saying it stands for women’s rights. Kari Michaels, co-founder of Women Organizing Opportunities for Women (WOOW), says that if students are truly concerned about the rights of women, born or unborn, they should join WOOW and participate in the struggle for gender equality. Michaels says the best way to combat gendercide is to “promote a culture of gender equality and not to restrict access to abortion services for families.”

Capko belives there are only two simple premises that have to be accepted in order to oppose abortion. The first is that it is a moral wrong to kill an innocent human being. The second is that an unborn child is an innocent human being. Therefore abortion is morally wrong. If you accept the premises you must accept the conclusion. Capko argues that the moment at which an embryo which has all its genetic material—its sex, its hair colour, its eye colour—is the moment at which it is an individual, a human being. He says his argument is biological.

Although he has a personal faith, Capko emphatically says that Protectores Vitae is not a religious group. He’s frustrated with news articles claiming otherwise.

“We have absolutely no connection to anything religious, as a club,” Capko says.

Part of the reason the club steers clear of religion is to foster unity within the group. “If we brought religion into it,’ Capko says, “all our meetings would just be heated disputes about religion because we’re not of the same background or religious beliefs.”

Capko says the perception that the group is about religion makes people “very adverse,” to it. But to him, religion is not part of Protectores Vitae’s core message. “It’s more the scientific facts of when does life begin.”

“I’d prefer it if they weren’t at Welcome Week.”

Women Organizing Opportunities for Women (WOOW) is a pro-choice, feminist club that stands in stark opposition to Protectores Vitae on the issue of abortion rights.

“I obviously would prefer it if they weren’t at welcome week talking to students about not having abortions,” says Michaels, “but I’m not going to stop people from talking about their opinions and they have every right to promote their club.” She says she’s happy that there weren’t “violent pictures,” or “gross images,” as part of their display. Michaels is optimistic that Protectores Vitae will maintain that respect for students.

“Regardless of what Protectores Vitae decide to do, WOOW will always be promoting safe clinics for women who are choosing to have abortions, safe sex products and contraceptive choices so that women are informed and educated about all their options,” says Michaels.

Capko says he wants an open dialogue with WOOW and other students that take a pro-choice position. “Our key message is not necessarily that we’re going to be gung-ho: ‘let’s try to get rid of WOOW.’ No, not at all,” he says.

“We’re not going to get any dialogue by just viewing each other as enemies. Rather, we have to share in this open pool of information and that’s how we should go forward.” 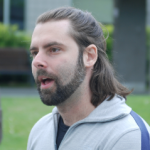 “I think that Kwantlen should remain diverse and not associate with groups because we’re here to learn. By bringing issues like this to the table we run the risk of eliminating certain groups from wanting to be here. I mean this is university, we should be leading those discussions in our classes and not associating with them. What we do out of here is great and what we do in a university should be pretty broad – we shouldn’t take any stances.

“I choose specifically not to go to a school for example that associated itself  with Christian ideologies  — not because I lack Christian belief  — it’s because I’m here to go to school. This is supposed to be an open university, if that changed I wouldn’t want to be here.”

“I went there and they were nice, like the way they explained everything. People were coming out and they were pretty excited to tell about whatever they were setting out for.

“They were actually pretty flexible. They were asking people, and they listened to [students].”

“This is a school, we shouldn’t involve religion with education, because if we do then it’s going to become complicated. There’s going to be conflict.  Everyone is going to have their own religion- and just like in class where you can’t say anything against someone’s religion- we can’t have religion in our education system. The KSA shouldn’t be funding things like this. [Protectores Vitae] are doing this, why can’t we have an atheist group going against them and having a booth in Welcome Week as well. I don’t think it was right for them, that’s my opinion.

“Growing up it’s always like you don’t talk about sex, religion or politics, and this issues encompasses all of those things. I grew up Catholic and you don’t talk about this issue. Everyone has their opinions, but no one needs to hear them. I don’t believe that there should be funding for things that affect so few people, I don’t really care if you’re pro-abortion or you’re not. That’s your opinion and I don’t want to hear about it.

“I’m from Kelowna and it’s super conservative and I can’t stand it. I came to the Lower Mainland to have a more broader sense of the world, religion and politics. And if I wanted that, I would have stayed there. I’m not against it, I’m not for it  — I just don’t want hear about it.”

Beyond the Match: Kyra Constantine is proud to represent Team Canada in national competitions