Some SFU students have grades withheld amidst dispute 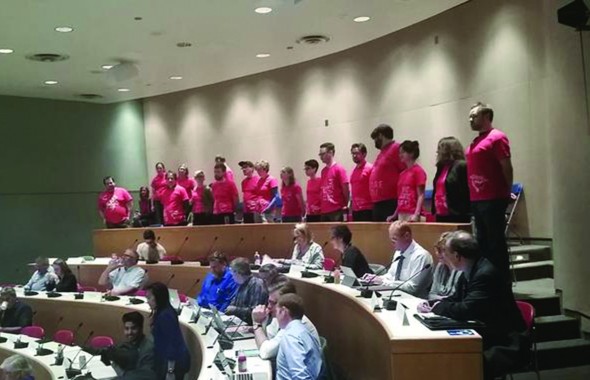 Photo courtesy of the TSSU

At Simon Fraser University, the Teaching Support Staff Union (TSSU) are currently on strike, and have been without contract since April 2014. The TSSU consist of teaching assistants, tutors, sessional instructors and ELC/ITP instructors. The TSSU consists of 2,000 members and has been active for 36 years.

The TSSU believes that there should be consistent seniority for senior sessional instructors, and that instructors who are in the ELC/ITP program should have access to SFU’s regular benefits package. As well, they argue that teachers assistants should be protected from being overworked and underpaid.

The impact of the strike on students has varied, with some not receiving their grades from previous semester, hindering their graduation progress. In July, the TSSU asked their active members to withhold grades during the summer months as a way to put pressure on the administration to come to a written agreement. This withholding of grades occurred during SFU’s summer semester because there are a higher number classes during that period which involve support from TSSU members, making it a perfect scenario to increase pressure and have their message heard.

Students at SFU have had mixed reactions to the strike. With one semester left, Jason Nannu, an undergraduate in the Bachelor of Science Degree program, recounts his last summer semester and his interaction with the TSSU.

“I haven’t received my marks for my classes yet from last semester [Summer 2015]. It was frustrating for this term [because] the professors said they can tell us if we passed or failed an exam, but we won’t know the actual mark,” says Nannu.

“I get that they need a contract, so I support them. But I wish it didn’t hinder my education.”

To get a better understanding of both sides of the TSSU strike, George Temple, a representative of the TSSU, was contacted for an interview, but The Runner was unable to speak with him by press time due to ongoing mediation talks.

The Runner also requested the perspective of the SFU administration, but was directed to a website, which said that the university was working to find “common ground.”