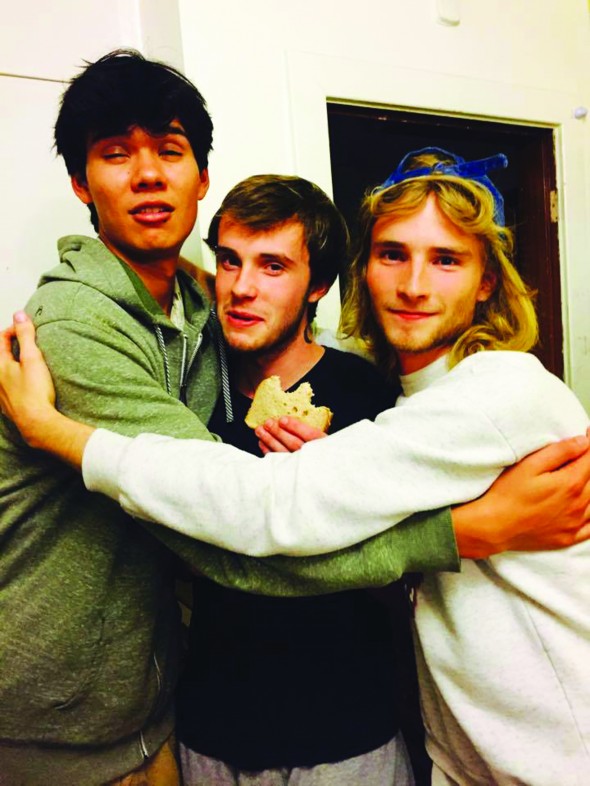 If The Strokes and Nirvana had a one night stand and produced a musical superbaby, you’d get The Jins. Though their recently released, self-titled EP is only six songs long, listening to it guarantees enough raw shouts and body-shaking riffs to satisfy a garage, alternative or pop fan.

This isn’t the first time The Jins have been lumped in with Nirvana, either. Lead singer and guitarist Ben Larsen’s raspy half-yell isn’t far off from Kurt’s, and if the frontman’s thin frame, blue eyes and shoulder-length blonde hair made the comparison obvious, toting an electric guitar on stage made it inevitable. The result is a lot of double-takes and name-calling from critics.

“I read this one review where the only thing they had to say about us was that we were so transparently influenced by Nirvana,” explains Larsen. “And we don’t really sound like them at all.” In terms of style, he’s absolutely right. The Jins are much more upbeat and pop-inspired than most early grunge. Instead, they describe themselves as “fun rock,” a label that is undoubtedly more fitting than “Nirvana cover band.”

They’re still regularly reminded of the resemblance, but they’re not afraid to have some fun with it. “There was this guy who was heckling me in a crowd and was like, ‘Hey, Kurt! Play ‘Smells Like Teen Spirit!’ So I did it just out of spite,” says Larsen. “It’s not the biggest deal in the world. I like Kurt, I have nothing against him. I would like to craft my own image, though. I feel like I’m being pigeonholed a little bit.”

“Pigeonholed” was a convenient word choice for the frontman to use, considering the origins of the band’s name. “The name, The Jins, comes from pigeons,” he elaborates. “When I moved to Vancouver, I lived in the Downtown Eastside in a really ratty old apartment. There were pigeons everywhere down there and I felt like I could relate to them, since they live in our city amongst us but they’re not really a part of our culture.”

“Also, they sleep outside and eat garbage and stuff.”

Larsen’s avian adoration became associated with the band when he started calling his friends “the jins.” Two of those friends, Jamie Warnock and Hudson Partridge, became the remaining  members of the group. Larsen, Warncok and Hudson all met in Vancouver, and the decision to make music together came naturally for them.

“I met Jamie when I moved out of the Downtown Eastside. It was like, you play music, I play music, let’s buy a drum kit and play a show on Halloween,” says Larsen. “So we got this one guy to play bass for us. He was only into it for that one show, but it was a really good time. I dressed up as a baby and had to buy adult diapers, which was kind of embarrassing at the till. I was like, ‘I swear, it’s for a costume!’ But I just wanted that shock value. No one else in the band dressed up as a baby. They were too self-conscious.”

Hudson replaced “that one guy” as The Jins’ bassist after he and Larsen became pals at animation school. Now they work as animators together, and all three of them are roommates. Since their EP’s debut was last month, the band is working on “getting tighter” more than recording new material. But more than anything, they just want to have some fun.

“I’m not trying to get into the industry, really. I’m just trying to catch a feeling,” says Larsen. “We’re a really no-frills, DIY, rock n’ roll pop band. We don’t take ourselves super seriously but it’s a personality conflict. We want to be passionate but we don’t want to be pretentious. We’re trying to put our music on everyone else’s level and present ourselves as something people can connect to.”

“I like to play music that sounds like a friend to someone. Some of my lyrics [off of the EP] are pretty satirical. Some are just me making fun of myself. Some of them are just Freudian slips. Like, I’ll try to write a happy song and think, ‘Oh, that’s not a happy lyric, but it sounds cool so I’ll keep it.’ I think that a lot of my lyrics are pretty naive and underdeveloped on the first EP and I want to work on that more.”

Stay posted to their Facebook page @The Jins for updates on their shenanigans, show dates, and releases.