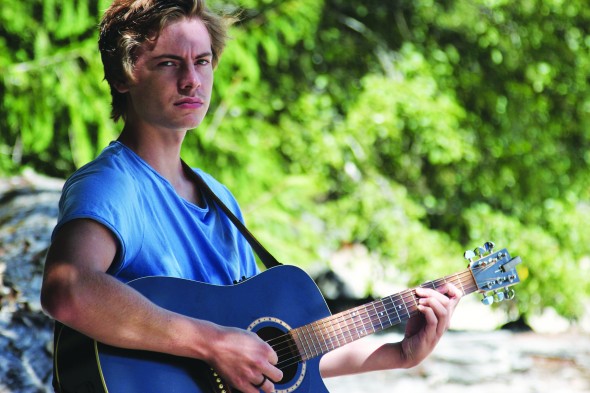 Jonah August left home at 18 years old. Scraping together as much survival money as he could, he moved up to Salmon Arm, BC where he worked at a tree nursery and wrote his first record. Despite having a multi-instrumentalist for a father and playing bass in his brother’s band, August had never shown a particularly keen interest in music before picking up an acoustic guitar. His move to Salmon Arm sparked the beginning of a long and intense journey with music that, now, has produced two EP’s: first, There Was Snow at Your Funeral, shortly followed by Elder.

Now that he’s living back home in Chilliwack, August has started working on his self-proclaimed debut album. “I would consider the first two demos,” he explains, “because what I’m doing now is such a step up.”

Both There Was Snow at Your Funeral and Elder are high-quality, unique records chock full of emotion. Each song presents delightfully melancholy, finger-picked melodies paired with August’s low and gentle vibrato. If what he’s is brewing up in his home studio beats the old records by such a long shot, we’re certainly in for a treat with the next one.

Over the summer, August wrote a whopping 19 songs for the new album, 14 of which should make it onto the track list (the other five could possibly be compiled as an EP, which would come out just before it). This might seem like a lot to do within a year, but for August, it’s ample time. He’s off of school, off of work, and expanding his home studio as best he can in preparation for the debut. The goal is to be done recording by his 20th birthday in March, which should be a piece of cake for the musician, as he finished his first EP within a month and his second in three weeks.

“If you’re serious about songwriting and you want to have an impact on someone, you have to live the music. You have to let it be your life, or when someone realizes that you’re a jerk but you write beautiful songs, they’re going to ask, ‘How does that work?’”

August plays, records, and produces every part of his work, regardless of the instrument. In other words, if you can hear it, he’s behind it. This becomes even more impressive when you realize his situation—everything he’s ever put out has been taped in his house using (gasp!) Garageband. The software has an unnecessarily bad rep, but that’s not stopping August from doing his best with it.

“I’m not embarrassed,” he says. “There’s just so many bad things said about Garageband that I’m successfully going to record a whole album on it.”

Although he’s channeling more time and effort into the upcoming album than ever before, he’s still recording from home on a computer, without needing help from anyone else. This lone wolf mentality doesn’t just apply to Jonah as an artist, though—it’s an integral part of his personality. In his high school years, Jonah regularly went off on unchaperoned adventures. To cure his adolescent shyness, he’d hitchhike with complete strangers just to force himself into conversation.

“Especially when I was 16, I’d go down to the ferry terminal and hop a ferry to the island, hang out for a week and sleep on the beach and stuff. I was living with my mom and she’d be at work, and I’d just ditch school. I was gone for like, two-and-a-half weeks on Vancouver Island once. I recommend it for able-bodied, young men to better yourselves a little bit.”

With every album, the artist focuses on a new theme. This album’s subject is simple: honesty. “I’m not going to be abstract about the lyrics,” Jonah explains. “I’m just going to be honest about the point I’m trying to get across.” This contrasts to his past releases, which were driven mainly by emotions and concepts, and therefore were more abstruse.

Another new contribution on the LP is the addition of drums. August decided to add percussion due to the “lack of rhythm in the other EPs,” and plans on adding more instruments into the mix, too. It’s bound to be an exciting project for the artist, who is going into it with enthusiasm and a critical mindset.

“I get so worked up about the details. Like, I get headaches,” he laughs. But it’s that kind of meticulous care for his work that creates such a clean, interesting product.