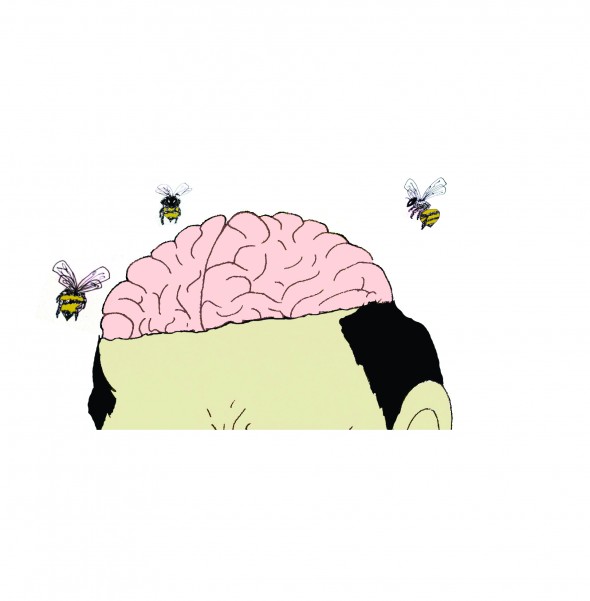 Kwantlen Polytechnic University’s new cognitive bee lab is well on its way to being ready for use. The fly cage is up. Several boxes with small bee hives contained within them stand ready. Cameras and TV monitors are ready to go.

Unlike what one might expect, this lab is not meant to be focused on the study of biological sciences. Rather, it’s a study of psychology.

Levente Orban, professor of psychology at Kwantlen, is overseeing the bee lab project. He has extensive knowledge of bees and their behaviours, and he explained that a lot can be learned about psychology from studying bees.

“There are a lot of questions that can be explored with bees as a model species,” says Orban. “We could have picked any other species but bees are convenient because we know a lot about their behaviours and what they do, and we can keep them in a lab like this.”

“We can ask questions about their perception, their visual perception, cognition, information processing, [and] memory,” Orban says.

Orban explained that the drive for these experiments will come directly from the students from Kwantlen. His purpose is just to act as an overseer and advisor. The lab is specifically designed for students to learn something, rather than professors doing their own research.

Kevin Smith, an honours psychology student, has his own ideas about what kind of experiments he would like to see done. He has been acting as Orban’s assistant in setting up the lab.

“There’s been a lot of research on bumblebees and their attraction to different colours of flowers,” Smith says. “A lot of the flower experiments they use are just general colours, blue, red, and yellow with some variation. I want to go a little bit further and actually see what the actual visual spectrum of the bumblebees would be.”

As with any experimental research, it’s important to be able to control certain variables. The more uncontrollable variables there are in an experiment, the less convincingly scientists can make inferences.

“There’s a lot of control we can have with bees that we can’t have with humans,” says Orban.

With the amount of bees that will be held in the lab, a reliable system needs to be in place to be able to track them. A bee colony can grow at the rate of about five to 10 new bees per a week.

“One of the important things when working with bees is to know which one is doing what, and there are quite a few of them,” says Orban. “There are small number tags that we glue on the bee, and they can go about their daily life, and we can see the number.”

Using a pair of tweezers, a bee is immobilized and put into a small jar with crosshatched holes at the top. The jar is formed like a syringe with the ability to gently push the bee to the top with the holes. These holes are just large enough to glue the number tags on them, but small enough the bee can’t escape.

Of course, when dealing with bees, safety has to be a top priority. There are three main layers of containment.

There is the first door to the lab which remains shut at all points in time, other than entering and exiting. Just inside the main door, there is a mesh screen door. Having these two doors, there is very little chance of a bee escaping into the rest of the campus. The bees themselves are contained in wooden boxes with tiny covered holes that can be opened or sealed.

The other main safety concern is the case of someone getting stung in the lab. If this were to happen, the lab has various medical supplies to attend the sting. This includes a EpiPen in the case of a several allergic reaction to the bee sting.

The cognitive bee lab is expected to be open for full use sometime next year.