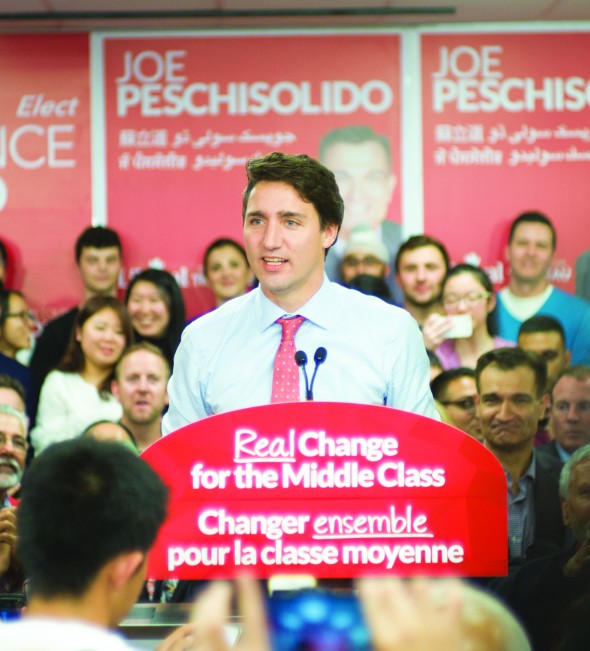 Justin Trudeau was in Richmond on Sept. 30 at the Liberal campaign office, a 10 minute walk from KPU’s Richmond campus.

The event was very crowded, with what seemed to be at least 100 people trying to cram themselves into the small office building on Westminster, a few steps from 3 Road. Predictably, everyone at the event was either a fervorous Liberal supporter or a member of the media.

“It’s great to be back in Richmond, it’s great to be back home in Vancouver, great to see so many people out tonight to support our great Richmond candidates Lawrence Woo and Joe Peschisolido,” Trudeau said at the event, receiving enthusiastic cheers from the crowd of supporters.

Trudeau continued for about eight minutes, reiterating his campaign promises and highlighting the Liberal’s focus on the middle class. He was also critical of the Conservative party and the NDP, and told the crowd that the Liberals would invest in public transportation.

“That means we’ll help Richmond invest in an expanded Canada Line, and new train cars to ease congestion and make your commutes easier. We will invest to build this country again. We’ll raise taxes on the wealthiest one per cent, so we can cut them for the middle class.”

Trudeau wasn’t available for comment, rushing out as quickly as he came in. However, two Liberal MPs for Richmond were available for an interview.

“Student debt is a big problem nowadays. When students graduate they’re loaded with debt and they’re faced with a situation where they can’t get down payments and so on,” says Lawrence Woo, candidate for Richmond Centre, regarding student debt. “It is a big problem that we need to resolve. So, unless we can find funds to alleviate this problem, our younger generation is going to be saddled with all kinds of debts after they graduate, and that’s not very good because we’re pulling them back when they first want to start out.”

Woo considers the situation to be unacceptable, and wants the federal government to work closer with provinces and universities. “I’m not talking about the forgiveness of debt, but we have to work something out very, very quickly.”

The Liberal plan for student debt contrasts with the NDP and Green plans, which involves making loans interest free and moving to a tuition-free model, respectively.

“It’s provincial jurisdiction—however, what the Harper government has done is for nine years they cut back transfer payments,” says Joe Peschisolido, MP for Steveston-Richmond East.

“Unfortunately, Prime Minister Harper has completely abdicated everything. He’s basically saying ‘Okay, it’s the provinces’ responsibility and we’ll cut back in funding in these two areas: education and healthcare.’”

Like Woo, Peschisolido also believes that more provincial cooperation is needed. “I think Justin Trudeau is taking the correct approach, by saying ‘Look, we want to have a collaborative type of federalism where we work with the provinces.’ So for example, here in B.C. we would reinstate meetings between the Prime Minster of Canada, hopefully Justin Trudeau, and Christy Clark to talk about these issues.”