Opportunities for youth a major priority for party, according to candidates 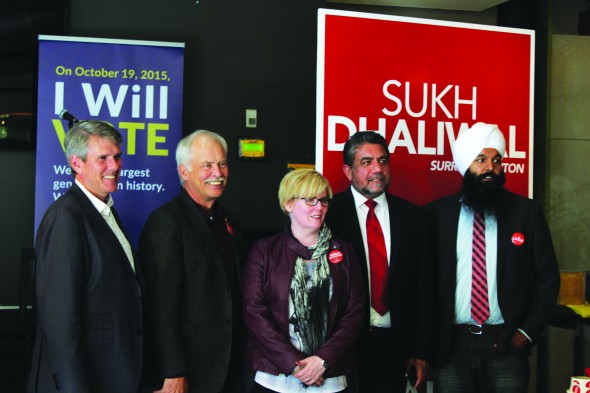 Five Liberal candidates spoke to Kwantlen Polytechnic University students at the Grassroots Café on Sept. 22 about their ideas for a better government. Questions from the students were received and the candidates touched on a myriad of topics in their answers. One of the questions centred on a major change the Liberals want to implement if they get voted in, which is the furthering of the government’s role in helping students and youth.

Sukh Dhaliwal, the Liberal MP candidate for the Surrey-Newton area, was very concerned about the lack of opportunities for youth graduating from university.

“We see the unemployment rate among our youth is the highest right now,” he said.

“The first thing you’re going to notice when you get out of university is that everybody’s going to ask you, ‘Do you have experience?'” said Randeep Sarai, the Liberal MP candidate for Surrey Central. “And that’s the biggest impediment for getting a job.”

The value of co-operative education was pointed out multiple times during the event. Not only do co-operative opportunities allow students to gain experience in their chosen field, they also provide students with valuable connections.

“You know what happens when you get a co-op position is that, once you work for a company for two or three months and they train you, they don’t want to let you go unless you really screw up,” said Sarai. “Then the ball goes in your court, and you actually have a ticket to a great job.”

John Aldag, the Liberal MP candidate for the Cloverdale-Langley area, told his own personal story of co-operative education. In his first summer of school, he found a job posting at the student employment centre at his university for Parks Canada. He applied for the job, thinking it would be a good way to fund his next year of education.

The second summer, he worked at the same job again. Before he went back for his third year, he was offered full-time employment, which he took instead of going back to school.

Aldag’s point was to highlight the connections you get while studying in co-op. He also pointed out how few opportunities there are for student employment compared to earlier decades.

“Your generation and my kids’ generation are the first ones who are likely going to have less opportunities than your parents did,” he said. “And to me, that’s very concerning.”

Sarai said the Liberals are going to take action for students if they get elected. “We’re going to create thousands and thousands of more co-op positions.” Aldag also reassured the those in attendance that the Liberals were ready to get behind students.

“Things like education, accessible education, are very important to me,” he said. “I really believe that the Liberals can offer opportunities for [students] as [they] enter the work world in the future.”

While the increase of co-operative education will be a benefit to students, it’s not the only issue. Carla Qualtrough, the Liberal MP candidate for Delta, said the Liberals are going to focus on listening to the people from their ridings.

“All our communities across Canada deserve better representations in Ottawa. We are tired, as a country, having people come back to our communities as messengers from Ottawa toeing a party line that was determined by one person who’s not interested, quite frankly, in the views of most Canadians,” she said.“I think the job of an MP . . . is to be the voice of a community in Ottawa, not the other way around.”