Even the Conservatives showed up 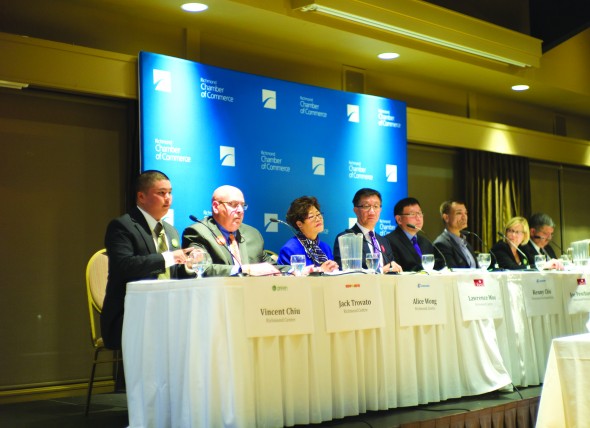 On Sept. 30, eight Richmond-area candidates gathered to take questions from a room full of voters. The venue chosen was the Richmond Country Club, right next to the Buddhist Temple along Steveston Highway.

In attendance were candidates for Richmond Center and Steveston-Richmond East, with all Conservative, Liberal, NDP, and Green candidates showing up to take questions.

The venue itself was packed, with a few in attendance standing. There was a projector to the left of the room with questions that were asked by the crowd via an app called “Pigeonhole.” The crowd seemed to have a slight majority of seniors and a diverse mix of backgrounds.

Later in the debate, several MP candidates were asked about what they believed to be the greatest issues facing Richmond today. Lawrence Woo, Liberal candidate for Richmond Center, said that racial harmony might be his concern, likely brought up due to recent controversies on Chinese-language signage. He also brought up poverty.

“To have someone who can’t afford to live in a place like Richmond is a shame. Poverty is also a big issue. Because we don’t have a skid row in Richmond, I don’t know whether that’s a blessing in disguise or a curse, because rich people don’t think poverty exists in Richmond, but it does,” said Woo.

In tune with their party, both Green Party candidates highlighted the Fraser River and various parks that need to be protected.

“The Green party believes in rapid transit, getting cars off the road, reducing our carbon footprint—so they would be putting money into mass transit and green technologies,” said Laura-Leah Shaw, Green party candidate for Steveston-Richmond East. “I was on Westminster highway the other day and it was a nightmare.”

“A congestion levy would have been an easy way out, just tax the people,” said Kenny Chiu, Conservative candidate for the same riding. “It would be perpetual, it would be instantaneous . . . And that is why I think it was the wrong choice for us, and I don’t believe that government should actually solve the problem that it has already given the resource to solve.” Chiu also said that the Conservative government distributed billions of dollars with the Economic Action Plan, and that it’s still going.

One question came up, asking the Conservative government why they removed protection from various waterways with the Navigation Protection Act. “This act was in the parliament, debated thoroughly, and passed. One of the things we didn’t include was a little river in front of my own home. So I think they’re over-doing it, they’re trying to do the opposite, and mask the true important things about the waterways. How we can make sure, including the Fraser River of course, the waterways are open, and making sure they’re protecting the environment at the same time. So we’re doing it due diligently, and that is the role of the federal government.”

The crowd responded to this answer negatively, with a few in the crowd yelling “shame.”

Aboriginal rights were also brought up in the form of a question from the crowd directed to all candidates, asking what each party would do about coming to true reconciliation.

“Poverty, underfunded schools, unsafe water, poor housing, violence, these are just a few of the things that have plagued our indigenous communities for far too long, and Stephen Harper has had a decade to [change] some of these things but has chosen not to,” said Jack Trovato, NDP candidate for Richmond Centre. “Also, we’re going to look into the 1,200 murdered and missing First Nations women,” said Trovato, before being interrupted by applause. “And we will do so within 100 days of forming government.”