Rock, Physics, and Butt Touches: An Interview with Destructive Interference 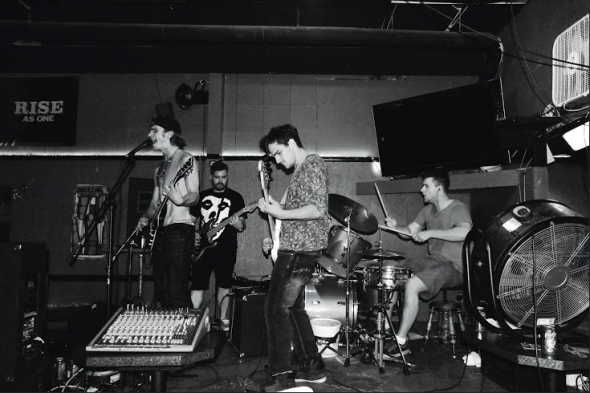 Rock n’ roll and physics don’t usually collide—but they did for Destructive Interference, a four-piece band living on the North Shore. The group got the idea for their name while at practice, thanks to frontman Derek Lionas’ extensive scientific knowledge.

“One day we were jamming and the note I was playing sounded super weird with what Charlie [Cole, guitarist and vocalist] was doing,” says Lionas. “There was a lot of dissonance and then it got quieter even though our amps were super loud. Charlie was like, ‘That was weird,’ but it was just destructive interference. It’s a physics term I learned in university. If two waves come at each other at opposite and equal wavelengths and frequencies, they’ll cancel out.”

Cole chuckles. “One time I told my buddy about the name and he was like, ‘So what, you go up onstage and don’t make any noise?”

Lionas and Cole both cover guitar and lead vocals, splitting the latter depending on who wrote the lyrics to the song being performed. Bassist Adam Rosenberg, who’s been there from the beginning, picked up his instrument for the first time just to join the band. A year into their existence, Trevor Stockdale became the fourth drummer to play for Destructive Interference.

For Lionas, Cole, Rosie and Stockdale, “This is everyone’s first official, solid band.” They’re finished recording their first EP, Touch my Butt, but have yet to complete the mixing and mastering. In any case, it will be released sometime within the next year, proudly bearing its absurd title.

“Across from the alley behind the studio where we recorded it, there was graffiti on the wall. One of them said ‘Touch my butt.’ And that was that,” states Lionas.

“Parents will be outraged. Teachers will be offended. It’ll be great,” Stockdale predicts.

The EP will contain four originals and two covers. “Calgary”, “Greece”, “Your Fellow Man” and “Shitty Hair” are those written by the band, and their renditions of “Feel Good Hit of the Summer” by Queens of the Stone Age and “Gimme the Loot” by Biggie Smalls will also be making the tracklist.

Destructive Interference describes their sound as “hard blues grunge rock.” Their hesitance to stick to one genre can be attributed to their diverse and eclectic sound, which makes every song stylistically different from the rest. An example would be the bluesy melodic rhythm of “Greece” as compared to the fast-paced punk feel of songs like “Calgary”. Similarly, on an unreleased “jazz punk” track titled “Hey”, the band discloses that there’s a “crazy ska, reggae-style breakdown” at the end.

“You’re never going to get the same song out of us twice,” says Lionas, and it’s true—subscribing to no particular label means that the band’s not afraid to experiment. In fact,  they spend the entire month of November writing brand new material. If all goes according to plan, those songs will make up their eventual debut LP, which could potentially lead to a tour.

That’s the goal, but for now, Destructive Interference is working on writing, practicing, and getting their EP out They’re also looking to play more house shows to appeal to an all-ages audience. “Plus, you can really connect to the audience when you’re partying with them,” says Rosenberg.

Cole continues, “Kids love live shows, too. I mean, what else are you going to do when you’re 16 on a weekend? For us, it’s less about the money and more about getting the name out.”