How the mighty have fallen 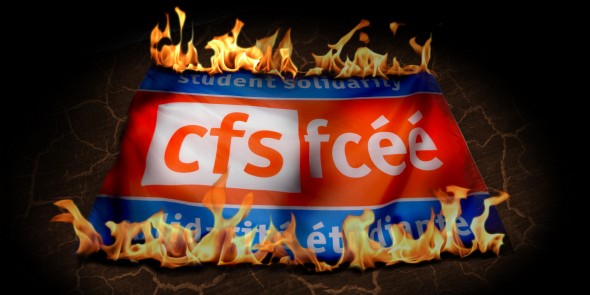 There was a time, not too long ago, when speaking ill of the Canadian Federation of Students caused many to vehemently defend the organization’s honour, sometimes claiming that those critical of it were enemies of the student movement.

It would seem those days are now behind us. The days of the CFS taking student unions to court to fight over cases of membership, of minimizing opportunities for media to cover their annual general meetings, of allegedly taking credit for other organization’s campaigns, all might finally be over.

The biggest indicator of this is that one of the CFS’ loyal student unions, the Students’ Union of Vancouver Community College, is currently not participating in the activities of the CFS as they believe the national executive is operating in contempt of its membership. This follows a series of unfortunate events for both the CFS and the BC Federation of Students (formerly CFS-BC) involving court cases and departing members.

Since approximately 2009, there have been critiques of the CFS at their national general meetings from a consistent group of student associations. These criticisms called for greater transparency, better internal organization, and more accountability. However, when a reform package was brought forth by the McGill Post-Graduate Students’ Society that outlined suggestions for how to address these concerns, the reforms were called “right-wing” and two camps within the CFS became more clearly defined: those who were happy with the CFS as it was, and those who wanted change. Firmly in the happy camp was the SUVCC, joined by many, many others.

The CFS used to represent thousands of students across Canada, and was additionally supported by provincial chapters that ran region-focused campaigns. The CFS states on their website that they represents one-half million students in more than 80 colleges and universities across the country, however those numbers have been disputed. For example, the Kwantlen Student Association is listed as a member, however the KSA made a decision some time ago to no longer participate in the organization even though they have been unable to terminate their membership.

It is difficult to describe the CFS in any succinct way, or to adequately explain why it is significant that the SUVCC is not currently participating in the organization. But what is clear, is that the CFS’ membership numbers have been dropping, to the extent that a very high percentage of their membership is now from Ontario alone. If the CFS is truly on the decline, as one of the country’s largest student lobbying organizations, where does that leave us? Indisputably, we need people advocating for lower tuition fees and better post-secondary education funding.

There are other organizations besides the CFS with this goal. Another national lobbying organization, the Canadian Alliance of Student Associations, also campaigns for better post-secondary access. On a provincial level, B.C. has the Alliance of B.C. Students, who frequently meet with MLAs to express their desire for better funding programs. The KSA has tried out membership in all three of these organizations, with mixed results. All of the organizations have had their successes, and each has had its fair share of critique.

One of the great downfalls of many a student organization is continuity. Election terms are short, so those involved with an organization one year may not be the next. Staff positions help alleviate some of this incongruency, but it’s not enough. We’re in a society now that largely shies away from collective organizing—that cheers when the province shuts down a union strike, that complains about how collective organizing is going to impact their individual life, and that argues that wages are fine where they are, even if people are struggling to survive. What this means is that any organization that is seeking to collectively work together and demand better, inclusive, supportive policies from the government is facing an uphill battle.

The most important thing any organization can do is respond to the needs and critiques of its membership. The CFS did not do that, and as a result they likely lost membership numbers. Other similar organizations could be facing a similar future. Even the greatest giants can fall, but this doesn’t mean we should give up on collective lobbying altogether. If we end up in a world where we have no student lobbying groups, we will immediately regret it—and watch post-secondary education become increasingly inaccessible.