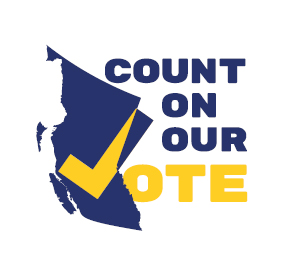 In preparation for the provincial election in May, the Kwantlen Student Association is joining the Alliance of B.C. Students in their Count on Our Vote Campaign. The campaign is an effort to convince students to register to vote in the upcoming provincial election, which the KSA believes is important to students.

According to KSA President and Chairperson of the ABCS Alex McGowan, the campaign will be “about empowering students and young people to vote, while recognizing that the current system is failing young people.”

Through their future events, the KSA hopes to “provide [students] with more information, let them know about events that are happening in the community, and make sure they have all of the tools they need to vote.”

McGowan says the campaign is, in part, an attempt to challenge the notion that students are too apathetic to vote in the provincial election.

“Students definitely vote in lower numbers than the average population, and we’re often told that that’s because young people are apathetic, and that’s just simply not true,” says McGowan. “There is no data or research to back that up. In fact, the research that is available indicates that, if anything, millennials and younger people care more than older generations and are more involved in their communities.”

He argues that the lower voter turnout among young people can be explained by a series of barriers, including students’ lack of time, heightened vulnerability due to family influence, and mental health-related crises.

“There’s a lot more bogging down young people,” says McGowan.“Also, one of the biggest indicators of whether or not someone is going to vote is if they have voted in the past, and if you’re younger, the chances are that you haven’t voted in the past. That’s not through any fault of your own and it’s not because you missed the election. It’s just because you weren’t old enough.”

There are also some systematic barriers that present challenges to younger demographics when they go to vote.

“Young people are using different communication platforms than there were in the past,” says McGowan. “We’ve seen a huge change in communication systems for this generation, but Elections B.C. and the government, as well as the political parties, haven’t really adapted yet. So young people in general are just not contacted as much by political parties and Elections B.C..”

Election B.C. sends information by mail to the primary owners of each registered household, which few students and youth identify as.

“Even if their parents get it, they might not see it,” says McGowan. “And if they’re not living at home, the government might not have their most recent address, so they might not get anything, or it goes to their landlord who might not pass it along.”

The ABCS Count on Our Vote campaign’s website is set to formally launch in the second week of March. On it, students will be able to volunteer with and find out more about the campaign.