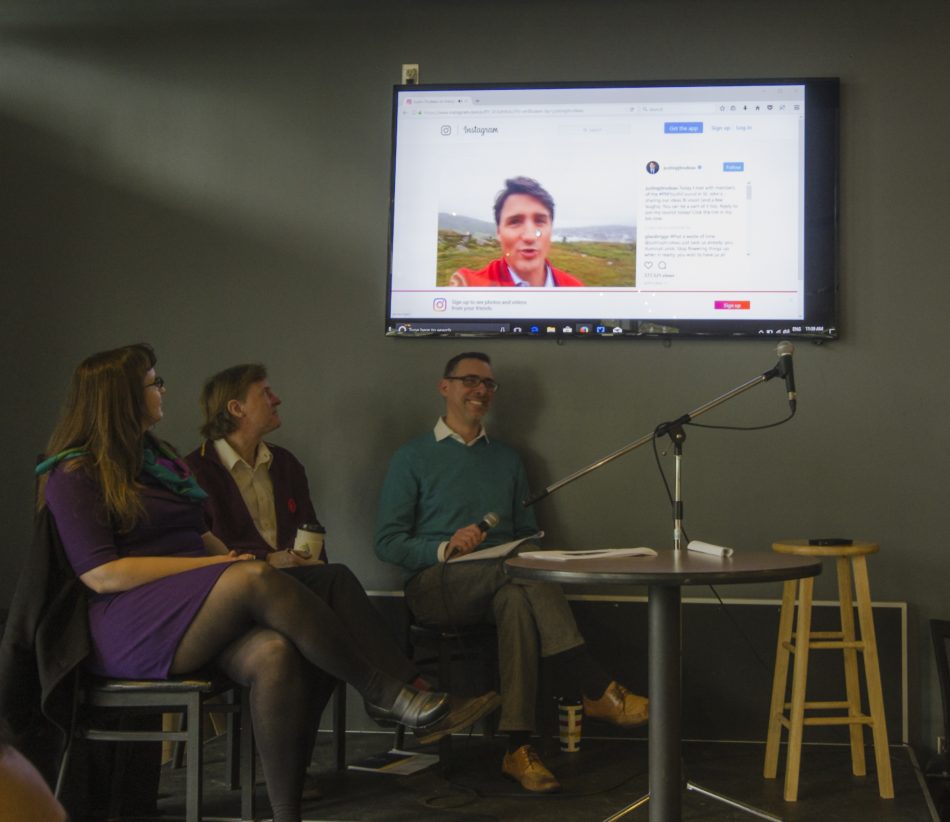 It may be hard to believe, but two years have already passed since the last federal election resulted in a Liberal majority in the Parliament of Canada. It has been two years since Justin Trudeau became the Prime Minister, and two years since Canadians began comparing the government’s performance against the standards set by its own campaign promises.

Now that the party has had time to work on policies, make good on a few vows, and break a few others, what does Trudeau’s midterm report card look like?

According to Kwantlen Polytechnic University Political Science professor Jennifer Gagnon, when it comes to feminism, Trudeau gets a B minus.

“It’s great that he’s talking the talk, but he hasn’t started walking the walk,” she said, during a small symposium hosted in the Grassroots Cafe on KPU’s Surrey campus. “I couldn’t agree more with Trudeau’s argument that feminism must include men in the fight to end sexism and oppression.”

Nevertheless, Gagnon remains critical of how he has spent his time in office, citing the Missing and Murdered Indigenous Women inquiry as being a particular area where Trudeau has underperformed. The Prime Minister’s failure to combat income inequality is another detriment to his grade, as Statistics Canada says that Canadian women make an average of 82 cents for every dollar that men make.

“Being a feminist is a big part of Trudeau’s brand,” says Gagnon. “But what I’m really asking is, ‘Is Trudeau actually a fake feminist?’”

Even though Trudeau’s Cabinet is gender-balanced, men still hold most positions of power in finances, defence, and foreign affairs, and women are still largely underrepresented in parliamentary standing committees.

“Two of the 10-member committees have no women, and three quarters have two or fewer,” says Gagnon. “Predictably, only the Committee on the Status of Women has a majority of female members.”

On the topic of Canada’s environmentalism, Dr. Ross Pink gives Trudeau a C minus.

One of the major concerns Pink raised was Trudeau’s approval of the construction of the Kinder Morgan Trans Mountain Pipeline, which stretches from Alberta to Burnaby. The pipeline has been a high-profile target for environmental demonstrators in the community, including students and professors from the Lower Mainland and Mayor of Burnaby Derek Corrigan.

“Trudeau has managed to make friends with the oil industry over his recent policies,” says Pink. “But he has infuriated the Council of Canadians, he has infuriated Greenpeace, and he has infuriated many First Nations groups over this pipeline issue. They feel that he betrayed them, that his promises during the campaign were [made] just to get elected.”

But it’s not all bad news for Trudeau’s GPA. Professor Greg Millard gives the Prime Minister an A on his brand management, adding that a political party’s public image is critically important for communicating with voters and thus retaining power.

“I think we all have a good feel for what Trudeau’s brand is,” says Millard. “If I were to pin it down, I would use three descriptors: openness, accessibility, and inclusion.”

While Trudeau’s critics complain that his leadership has been more about style than substance, Millard makes the argument that, in some circumstances, style actually is substance. He believes that Trudeau’s brand—as a reflection of Canada’s current, young, and progressive self-image—has a real impact on the country, even if it disconnects from policy.

“Leaders, governments, and their brands are as much expressive manifestations of a community’s self-image or aspiration for itself as anything else,” he says.

The professors’ consensus is that Trudeau will likely be re-elected in the 2019 election, although—as has become increasingly clear over the past year—anything can happen in politics.