I Love Pineapple on Pizza and So Should You 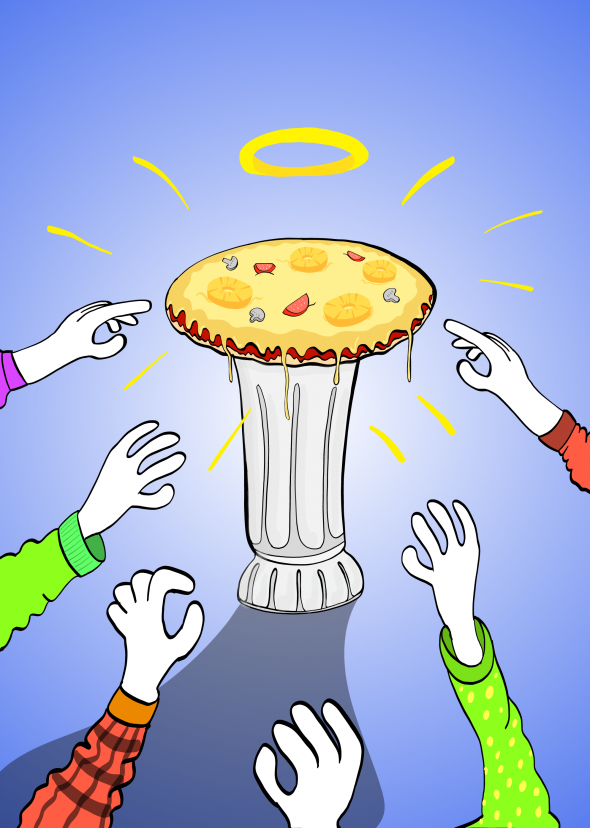 Ananas comosus, or the common pineapple, is a medium-sized yellow fruit with a sweet tangy flavour, a half-chewy, half-crunchy texture, and a pokey, leathery outer rind crowned with an adorable little hairdo of spiky leaves on top.

It tastes great by itself, in fruit salads, in pina coladas, and yes, as a topping on pizza. In 1962, Sam Panopoulos made this discovery in his family-owned pizzeria in Ontario, introducing to the public one of the tastiest pizza toppings and forever changing the world.

Despite its popularity, the thought of putting pineapple on pizza elicits a primal form of disgust in a lot of people these days. As a result, the poor Hawaiian pizza has been made the target of ridicule by a mob of cynical, unadventurous pizza-philistines.

Of all of the culinary dishes that mix the sweet with the savoury, Hawaiian pizza has become one of the most unjustifiably hated-on dishes of our era. It’s time for somebody to set the record straight in its defence. Here are three reasons why pineapple should be accepted as the amazing pizza topping it is.

The world of pizza toppings is an undeniably vast and intimidating one, but luckily they can all be sorted into three simple categories: cheese, vegetables, and meat.

Now, I’m by no means an expert in math, but I’m pretty sure that mixing these 30 individual toppings in every conceivable way can only yield a maximum of six or seven different kinds of unique pizza variations.

After a while, most of these toppings come together to create flavour profiles that are unoriginal and repetitive. You’re just making the same pizzas over and over again—salty cheese covered in salty meat with some vegetables thrown on top as an afterthought in an attempt to preserve the dwindling remains of your self-respect.

We know you’re better than this.

This is why the pineapple is a game changer. Instead of combining the same few flavours, you can mix things up a little and throw some delicious, sweet, tangy, tropical deliciousness in there. All of a sudden this whole new dimension of flavour opens up to you that you had never experienced before, all thanks to our little spiky friend.

It is a scientific fact that fruit is good for you. Ask a doctor. Ask your mom. They’ll tell you.
Stats Canada says that “a diet rich in fruit and vegetables may help to prevent cardiovascular disease, certain cancers and obesity.”

Did you know that 100 grams of pineapple contains 58 per cent of your daily recommended intake of Vitamin C? Pineapple also contains high amounts of manganese, which you need for your body to do things. People eat fruit for breakfast all the time because of the health benefits.
This conclusively legitimizes Hawaiian pizza as a part of this complete breakfast because it contains fruit. Eating pizza for breakfast can be good for you. That’s just more science.

Don’t ask your mom about that, though.

As a person who enjoys the shit out of Hawaiian pizza, this divisiveness is definitely a good thing. Because of its controversial reputation, the supply of Hawaiian pizza often outweighs the demand for it, which means that there’s almost always more left over for pineapple lovers to enjoy. This lends a convenient exclusivity to the dish, which I personally take advantage of as much I can.

If I’m at a party or another event where pizza is being served to a bunch of people, I can take my time in grabbing a slice or two, strolling up to the buffet with lackadaisical confidence. I retrieve my slices, brandishing the forbidden fruit with dignity, and focus my pitying gaze on the fools who have yet to see the light.