After Thought: A Post-Budget Primer on Carole James

Take a look at the past accomplishments of B.C.’s Deputy Premier and Finance Minister 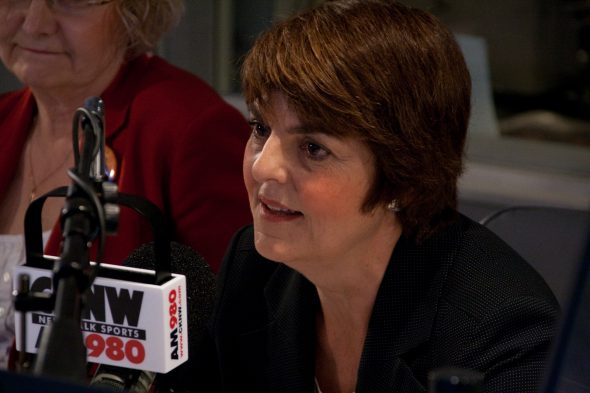 In 2009, NDP leader Carole James made an appearance on CKNW to debate with the other provincial party leaders. James is now B.C.’s Minister of Finance, and Deputy Premiere. (flickr/Stephen Dyrgas)

Now that the provincial budget has been announced and the dust has somewhat settled, it warrants a retrospective look at the woman who is at the centre of it all: The Honourable Carole James, MLA for Victoria Beacon Hill, B.C. NDP Finance Minister and Deputy Premier of British Columbia.

James first entered the public arena of provincial politics in 2001 when she ran for the Victoria Beacon Hill riding. She performed very strongly for a debut candidate but was ultimately defeated by an incredibly narrow margin of just 35 votes.

She and her family then moved to Prince George and she became the director of a child and family services organisation. James, who identifies as part Métis, also helped coordinate between the Ministry of Children and Families and the Northern Aboriginal Authority for Families.

James’ break from politics would be short-lived, and in 2003 she was elected leader of the B.C. NDP. This followed the landslide defeat of the party in the 2001 election, when they only held two seats in Parliament. James replaced interim NDP Leader Joy McPhail and got to work rebuilding the party’s image.

The results of the 2005 election showed that her efforts had been effective. The NDP regained 31 seats, almost doubling their share of the popular vote from 21 per cent in 2001 to 41 per cent in 2005. James also finally won her race in the Beacon Hill riding, defeating Bray by a margin of almost two to one.

For the next five years, James continued to serve as leader of the opposition until a group of 13 NDP MLAs led by Jenny Kwan called for her to step down. Aside from McPhail, Kwan had been the only other NDP MLA who managed to hold on to her seat during the 2001 wipeout, and she harshly and publicly criticised James after the party plateaued in the 2009 election, issuing a long statement that, among other things, accused James of “dividing the party by staying on as leader.”

James listened and relinquished the party leadership, serving under Adrian Dix as the NDP Critic for Children and Family Development, and was given the role of Official Opposition Spokesperson for Finance by John Horgan after he was elected NDP leader in 2014. Horgan was loyal to James during the controversial end to her leadership term in 2010, so nobody was surprised when she backed him to succeed Dix during his own leadership bid.

Then, in 2017, after the NDP formed its minority government with the Green Party after the election, Horgan appointed James to the positions of Finance Minister and Deputy Premier, arguably two of the most prestigious and powerful positions in the provincial level of government.

Before her political career began, James had been elected onto the Greater Victoria School Board between 1990 and 2001 and served as President of the B.C. School Trustees Association for five straight terms in the mid-’90s. She also worked for two years at the national level as the Vice-President of the Canadian School Boards Association.

Given that the NDP’s election platform was so heavily based on childcare reform and increased spending on education costs, Carole James’ prior experience made her the perfect fit to lead the way on creating the new budget. Her previous experience on the Independent B.C. budget review panel likely didn’t hurt either.

Only time will tell if the NDP’s budget will really improve the lives of British Columbians. But for those in doubt, at least when it comes to the portfolios of childcare and education finance, the fate of the province is in very capable hands. After collecting decades of experience in education and working with children and families, followed by more than a decade of experience in B.C. politics, Carole James knows what she’s doing.