Investing in Transit Benefits British Columbians and the Environment

Federal and provincial investments in infrastructure are a cause for celebration 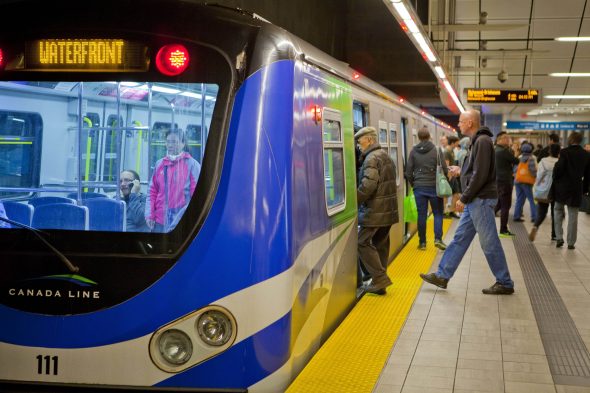 Over the next 10 years, the federal government will be allocating $4.1 billion to B.C. infrastructure projects.

The funding deal, which was announced at the beginning of April, will cover the costs of green infrastructure projects, recreation areas, infrastructure in northern B.C., and perhaps most importantly, transit projects—specifically the proposed Broadway subway line and the Surrey LRT extension. Approximately $2.2 billion of that funding, which was included in the 2017 provincial budget, is going towards public transportation in the Lower Mainland.

To put that number into perspective, the entire process of constructing the Evergreen line cost just a little over $1.4 billion, with about $1 billion coming from the provincial and federal governments and $400 million coming from TransLink.

People often forget that public transit initiatives are one of the most effective and important ways of addressing carbon emission reduction in the country, and the collaboration between provincial and federal governments is a considerable step towards accomplishing the country’s mandate to mitigate the risk of climate change.

Both levels of government have committed to funding 40 per cent of the Broadway expansion and the Surrey LRT, leaving Vancouver and Surrey to pay for the remaining 20 per cent for each project. If everything goes according to plan, the projects should reduce the number of cars in those areas, which means cutting down on traffic congestion and reducing commuters’ reliance on fossil fuels.

The funding comes as a part of the federal Liberals’ post-election commitment to spending $180 billion on infrastructure projects across Canada, but details about sourcing and transferring the money weren’t finalized until April 2, which is when most of the $4.1 billion was “unlocked” for the province’s use.

Since the B.C. Liberals announced their Climate Leadership Plan in 2008, making infrastructure in the province more environmentally friendly has become a central focus of these projects.

Examples of “green infrastructure” upgrades include implementing more HOV lanes, installing solar-powered lights and cameras along highways, and even optimizing border crossing traffic between B.C. and the U.S. in order to cut down on the emissions created by cars waiting in line. In Vancouver, rainwater collection and management helps to hydrate the abundant trees and plants in the city while conserving water, and the plants actually help filter pollutants out of the rainwater before it makes its way into rivers or the ocean.

During a time when the controversy surrounding the Trans Mountain pipeline has highlighted the importance of infrastructure projects’ impact on the environment, the fact that the federal government is making good on its commitment to invest in greener infrastructure and transit goes a long way in terms of demonstrating its willingness to take action where it can.

It’s important to remain critical of our governments and to hold them to account for repeatedly failing to meet emissions reduction targets over the past two decades. However, it’s also important to validate and appreciate the efforts made that will have a real and positive impact.