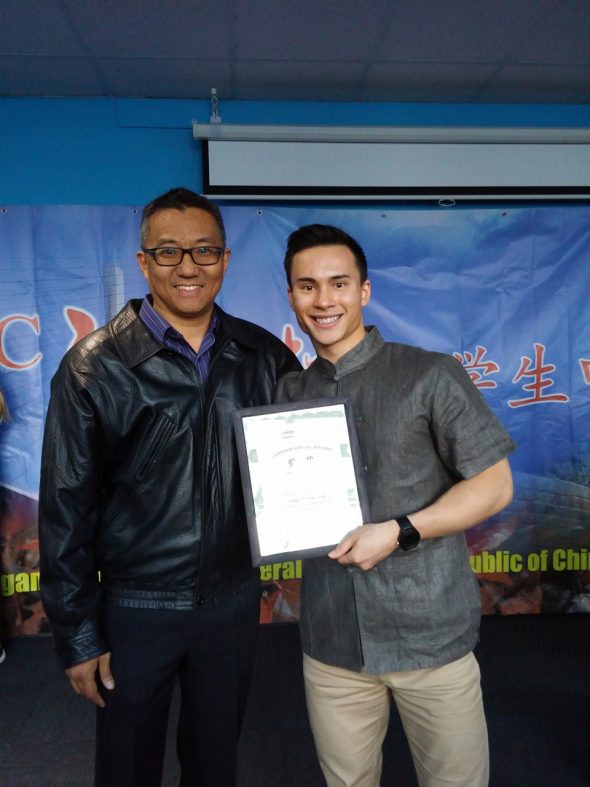 With over a billion native speakers, Mandarin is the most commonly spoken language worldwide. It is also the fastest growing and second most common language in Greater Vancouver, with 2016 census data recording over 385,000 Chinese speakers here.

Each year, the Confucius Institute at BCIT hosts the annual “Chinese Bridge” Mandarin Speech Contest and Mandarin Singing Contest to promote enthusiasm and education about the Chinese language, specifically amongst university students in the province.

The 2018 speech contest, which took place on March 17, marks the third year in a row that a Kwantlen Polytechnic University student has won an award in the competition. This year, the winner was Alex Tam, a third-year arts student who took home third prize out of 36 contestants in the elementary level, non-heritage speaker group.

“I think this was my first time ever doing a public speaking contest, let alone in another language, so it was definitely nerve-wracking for me,” says Tam. “To be the first one to speak out of the entire competition, it was even more scary because I didn’t have any standard to follow. I just dove in and gave it my all.”

Tam took an interest in Mandarin because of its increasing global importance, but also as a way to honour his ancestors and forge a deeper connection with his own heritage.

This year’s theme was “Me and China” and for Tam, that meant exploring his Cantonese roots and reflecting on a trip he took to Hong Kong last year. Specifically, he considered his experience with cycling 35 kilometres through the city with an old friend of his grandfather’s.

“He’s a senior, and I was amazed at his athletic ability and his age,” says Tam. “I felt it was so precious that I had to honour what he’s done for me, so I did it in the speech.”

So far, Tam has taken two Mandarin classes at KPU with professor Yanfeng Qu, or Qu Lǎoshī to his students.

Qu has taught at KPU since 1996 and founded both the Mandarin program and the linguistics program. He was the first-ever recipient of the annual Dean of Arts Teaching Award has been on the panel of judges for the speech contest since its inception.

“If I do it again, it would definitely be because I love learning the language and because of the teacher, Qu Lǎoshī,” says Tam. “He’s an amazing teacher and KPU is so lucky to have him. His enthusiasm that he brings to class encourages an environment for learning for all his students.”

Qu modestly says that the success of KPU students in the contest can be attributed to the students themselves.

“I give them credit,” he says. “They are working very hard and they are fully engaged.”

In addition to allowing speakers to connect with the local community, Qu points out that Mandarin is “the language of business” and “one of the six official languages of the UN,” making it a significant asset for expanding job prospects.

For those who are intrigued by the language but intimidated by its complexity, Qu says that musically-gifted students generally learn the tones well, and those with an artistic background typically do well with the characters.

Learning Mandarin is certainly a challenge, but “it’s not insurmountable,” says Qu. And for all the difficulty, having even a basic grasp of the language can be incredibly rewarding.

“Learning another language is so invaluable, especially in today’s world. We are becoming more international, so it opens up so many more opportunities when people are able to communicate in another language,” says Tam. “Communication is key. It doesn’t really matter what you can do, if you can’t communicate with someone, you can’t really do anything.”