Throughout May and June, the City of Surrey is inviting the public to check out its new prototype LRT vehicle 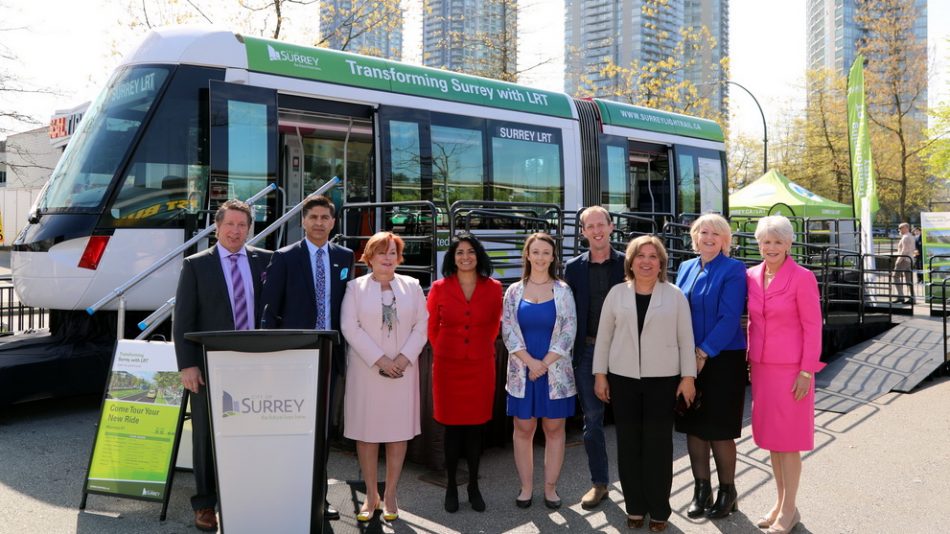 The City of Surrey is now displaying a prototype of the light rail transit vehicle that will be used as part of its proposed rapid transit plan.

In the first phase of the project, the LRT rail routes—which will connect to the Surrey Central and King George SkyTrain stations—will travel South to Newton Exchange and East to Guildford Exchange. The second phase of the project will consist of constructing a ground-level LRT line along Fraser Highway that stretches from King George Station to Langley Centre.

Caitlin McCutchen, President of the Kwantlen Student Association, attended the opening LRT vehicle showcase on May 2 and spoke in support of the project.

“The accessibility of the LRT project and increased transit infrastructure will provide [for] Surrey residents [and] will help to keep young adults learning and working in Surrey while attracting new students from throughout the lower mainland, which will ultimately make the City of Surrey a better place to live,” McCutchen said in a press release circulated by the city.

Translink plans to have light rail in Surrey constructed and operational by 2024. The company claims that it will provide a number of benefits to the public such as reducing traffic congestion, increasing transit capacity, creating new jobs, and helping reduce emissions.

However, not everyone is happy with the direction the city has taken in constructing the new rapid transit project.

“From our point of view, this system that they are proposing is not really worthwhile,” says Daryl Dela Cruz, a KPU geography student and the founding director of the SkyTrain for Surrey organization. SkyTrain for Surrey was created in 2012 with the goal of convincing the public and City Hall that adding on to the existing SkyTrain line is a better option than building the new LRT.

“The current plan doesn’t maximize transit access opportunities and a reduction of travel time, which are critical for students,” says Dela Cruz. “Students run tight schedules and we may be working alongside [going to] school, so when it comes to facilitating student lifestyles, we have to address the shortfall that it takes a while to get around on transit, and that option doesn’t work for a lot of students.”

SkyTrain for Surrey has proposed that—instead of building three LRT lines from Surrey central to Guildford, Langley and Newton—there should just be one SkyTrain route that connects to Langley Centre.

“The Langley campus would actually be only minutes away from a Langley Centre SkyTrain station, which would link the campus with the entire region,” says Dela Cruz.

He adds that SFU, UBC, Douglas College, and Langara College all have campuses located near transit hubs, or at stops along the SkyTrain routes.

“Kwantlen students have been facing a shortfall with regards to transit access when you consider both big and small institutions across Metro Vancouver,” he says. “They have much better transit access even when they have multiple campuses around the region.”

The new LRT vehicle will be available for the public to view from May 2 to July 1 in several locations such as the Newton Superstore, Surrey Civic Plaza, Guildford Town Centre, and the Canada Day Celebration in Cloverdale.