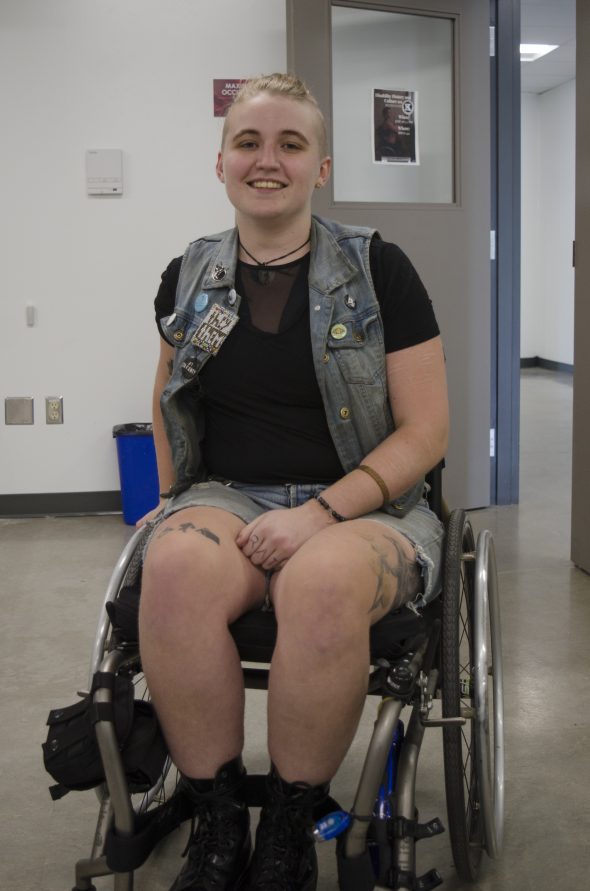 Disability workshop facilitator Q, specializes in teaching about the history and culture of people who live with disabilities. (Braden Klassen)

In 1957, archaeologists from Columbia University discovered a cave burrowing into the side of a mountain in the Bradost range of northern Iraq. The cave, now commonly known as Shanidar Cave, contained several interesting artifacts and a collection of remains belonging to Neanderthals who were estimated to have lived in the area 35,000 to 65,000 years ago.

The first of these bodies, a man deemed “Shanidar 1”, had suffered severe physical injuries throughout his life which left him half-blind, deaf, and likely paralysed on his left side. He was also missing part of his arm, possibly from a childhood illness, and likely had to contend with a debilitating limp.

What truly intrigued the researchers, though, was the degree to which he had healed and how he had lived to a relatively old age. They surmised that the other Neanderthals that Shanidar 1 lived with must have put significant effort into caring for him, and likely regarded other disabled members of their community with profound care and respect.

This was the first of many stories that Q, a local activist and disability workshop facilitator, shared with students and community members at the Disability History and Culture 101 workshop presented by the Kwantlen Public Interest Research Group.

They have been leading workshops on this subject for nearly a year, beginning at BC Children’s Hospital and branching out as the popularity of the events grew.

“I always found disability history to be really interesting. There are so many things that are just really badass, to be frank,” says Q. “The disability community is really badass and doesn’t get recognized as such, and I wanted people to know that, so I started branching out.”

They believe that this kind of education is important for people to understand the importance of accessibility. Q has a genetic illness that makes their joints dislocate easily, which is why they use a wheelchair. They also have cancer, identify as being on the autism spectrum, and live with mental illness.

In the workshop, Q and others spoke about the communities and cultures that have arisen from activism led by people living with disabilities. They touched on the subversive Cripple Punk movement, disability representation in the media, and the criminalisation of disabled people through the “ugly laws”—laws that, up until the 1970s, punished people with visible disabilities for going out in public.

KPIRG Director-at-Large Simon Massey says that providing this kind of education to KPU students is a valuable part of what KPIRG does. He points to one of KPIRG’s action groups, Disability Action Movement Now, as an example of ways that the research group supports disability advocacy in the community.

KPIRG itself is currently the subject of controversy as one of the group’s founders and employees allegedly defrauded the student-funded organization of almost $112,000. This breached an autonomy agreement that KPIRG had with the Kwantlen Student Association, which voted to stop remitting student-collected funds to KPIRG in April.

Massey says that, despite this, he believes that KPIRG will continue to facilitate events “for at least a year.”

Chay Usison, a KPU student who sat in on the workshop, says that she enjoyed it and plans to attend similar KPIRG events in the future.

“I came in and I ended up learning a lot and it was amazing,” she says. “Hearing about how different cultures react to people with disabilities was also interesting to learn about.”