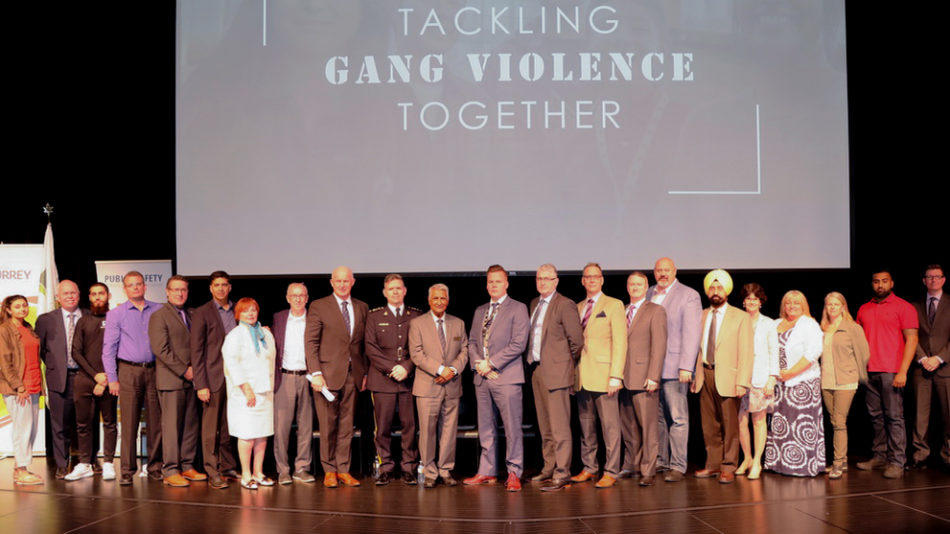 The Mayor’s Task Force for Gang Violence Prevention met for the first time on Oct. 26, 2017, and released the final report on July 3 2018. (surrey.ca)

For years, Surrey has had a uniquely problematic history with gang-related violence flaring up in the streets, shattering lives and leaving communities torn.

Residents have been calling on City Council to take action that results in a meaningful reduction in organized crime, which is why Mayor Linda Hepner formed the Mayor’s Task Force on Gang Violence Prevention in August of last year. Since then, the task force has met multiple times and created a report which recommends steps that they believe will significantly reduce organized crime-related violence in the city.

The report, which was the culmination of years of planning, research, stakeholder meetings, community engagement, and collaboration, was released to the public on July 3. The document rigorously details the strategies that the city aims to use in order to reduce some of the violent gang activity that has left Surrey with an infamous reputation.

“I am confident that, as we take action on the findings of the task force, we will ensure Surrey and other communities in the region make tangible progress to disrupt and eliminate gang violence and the low-level drug trade that fuels it,” wrote Mayor Hepner in the report’s preface. 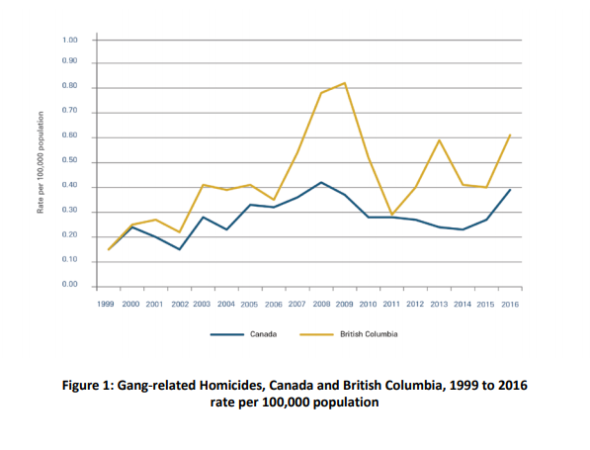 The release of this report came on the heels of a targeted shooting which killed 16-year-old Jaskarn “Jason” Singh Jhutty and 17-year-old Jaskaran “Jesse” Singh Bhangal. This tragedy galvanized communities in Surrey to hold a rally and demand that action be taken to prevent further gang violence. The rally was organized by Wake Up Surrey, a grassroots action group, and it attracted thousands of people, including family members of Jhutty and Bangal, local media, and B.C. Public Safety Minister Mike Farnworth.

This outcry from the community has demonstrated that the need to address gang-related violence has become one of the highest priorities for Surrey residents. In a city where public safety and crime reduction have been polled as the top civic issues for years, citizens, including KPU students and faculty, are becoming increasingly involved with prevention efforts.

Dr. Keiron McConnell, a criminology instructor at KPU who specializes in researching gangs and organized crime, was selected to be a part of the city’s task force. His research was included in the final report.

“We’ve had gang violence in the province of British Columbia forever,” he says. “We’ve reached a stage in the Lower Mainland where the community is very concerned about gang violence and we need academics to do research so that we can have evidence-based practices.”

McConnell has taken part in and authored a number of academic papers on various gang-related topics in the past, most recently publishing an article co-authored with Shaveta Gahunia, a KPU Criminology graduate, and Dr. Andy Bains, Director of Criminal Justice Studies at Mount Union University. The article examines the effectiveness of programs like Vancouver’s Barwatch and Restaurant Watch—which allow owners and staff of these establishments to kick out known gang members—and how they affect the public’s perception of safety.

“The police department learned that a lot of bar and restaurant owners, managers, and staff were quite intimidated and afraid to actually ask these people to leave, so that was the catalyst for some discussion with legal counsel around what the police could do to help with that,” says McConnell.

One of the concrete actions that Surrey’s plan contains is implementing a more general “Inadmissible Patron Program” that would give businesses the ability to work with the RCMP to keep gang members out of their establishments.

McConnell’s doctoral thesis also explores the nature of organized crime in B.C. in contrast to other cities and countries. He says that, compared to gang cultures in Toronto, Chicago, London, Los Angeles, or Maskwacis (formerly known as Hobbema), B.C gang members come from a wide range of both economic and ethnic backgrounds, and many opt into the lifestyle by choice, not out of  necessity.

The task force report states that B.C.’s “gang landscape is always changing and possesses characteristics which appear to be unlike any other region experiencing gang violence.” It is generally known that traditional risk factors for gang involvement include poverty, lack of a stable home, and being subjected to institutionalized racism, but this is not always the case. McConnell’s research suggests that, in B.C., the causes might be more complex.

“What gang members look like in [other cities] is much different than what the average gang member looks like in British Columbia,” he says. “I would say that the lion’s share of young men in our community are joining gangs from a rational choice perspective. They’re doing a hedonistic calculation, saying ‘I could go to university. However, if I was to set up a drug line, I’d make significant money sooner with relatively little consequence,’ when the reality of it is that there are huge consequences.” 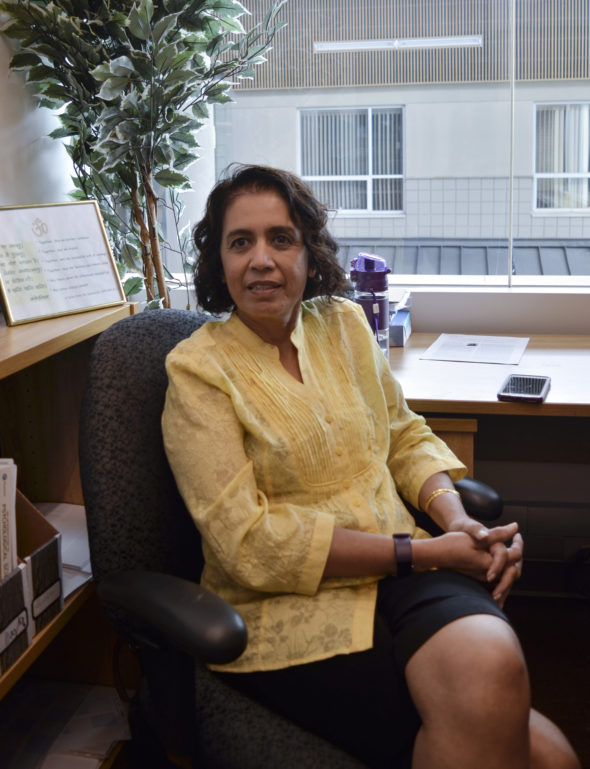 Dr. Gira Bhatt, a KPU Psychology instructor, has heavily contributed to research focusing on the prevention of youth gang involvement.

Bhatt says that community collaboration is the key to preventing gang violence, but it’s not always effective. Surrey has several social programs that help youth stay away from gangs or empower them to leave. Anti-Gang support programs like the RCMP’s Wraparound Program, YoBro/YoGirl Youth Initiative, the Gang Exiting Program, the Seva Project, the City’s Youth Empowerment Mentoring Program, and The Next 100 Years Mentorship Program have been around for years. However, until the task force report was released, there wasn’t much collaboration between them.

“What is happening is that these are kind of isolated efforts. Some of them are often driven through common sense and through passion, and they really want to do the work,” says Bhatt. “What we’re saying is, ‘Let’s all work together.’ There’s only so much one small group can do.”

Bhatt, who was awarded the Distinguished Contributions to Public or Community Service award from the Canadian Psychological Association in 2017, worked with AT-CURA to create the “Gang Prevention: A Parent’s Quick Reference Guide” pamphlets that were distributed all over the city. The information booklets were translated into 10 different languages and detail some of the signs of youth involvement in gang activity, such as owning multiple cell phones or suddenly possessing unexplained cash or goods.

Bhatt is optimistic that the combined efforts of the community and city will have a positive effect on reducing gang violence.

“There has been so much research done on risk factors, and what kind of kids get into what kind of trouble, but the reality is that 90 per cent of the kids are fine,” she says. “For the kids who are negotiating their youth well today, how do we ensure that they stay there and that they don’t fall through the cracks?”

According to some of the data in the task force report, that may be harder to do as time goes on. It includes information collected by UBC’s Early Learning Instrument survey, which assesses the vulnerability of children based on their physical health, language and cognitive development, social competence, emotional maturity, and communication skills. Children whose families are faced with socio-economic challenges are more likely to be vulnerable in one or more of these categories, which can lead to being at higher risk of getting involved in criminal or gang activity.

Bhatt says that looking at the underlying factors that prevent youth from joining gangs is more important than focusing on assessing their risk of involvement.

“A lot of youth that get involved in gang activity come from middle-class homes without any dysfunction in the family,” she says.

According to her, efforts made to try and scare youth away from gang life by showing them the unglamorous or dangerous consequences of the lifestyle will sometimes backfire and actually entice them more. Depending on their age and their cognitive development, children or teenagers may be unable to grasp the severity of their choice to associate with gang members.

“Death is a distant reality,” says Bhatt. “They can’t connect with it.”

KPU criminology student Harleen Gill, who attended the Wake Up Surrey Rally, says that it can be hard for young people to take gang involvement seriously. She recognizes the use of the popular label “Surrey Jack” as an example of a normalised stereotype for Surrey youth.

“We take it as a joke but it’s something that some youth look up to,” she says. “You wear certain clothes and show off your money or drugs. That term can be dangerous to use, even racist in a way. It’s grouping specifically male South Asians into a category involving gangs.”

Gill also believes that women’s involvement in organized crime is downplayed by society and the media. She criticizes Wake Up Surrey for not addressing women’s roles in gang activity at the rally.

“They didn’t address females and their attraction to gang life. Even in the media, they completely disregard females as a part of the gang problem,” says Gill.

According to the task force report, “females are involved in gangs as girlfriends and increasingly as active participants. Because females are less likely to be targeted by enforcement, they are being used by gang members to carry guns and drugs, and to provide their names for houses, cars, credit cards, and cell phones. Females are also becoming more involved in drug trafficking, recruiting, and committing gang violence.”

Gill thinks that the community should be more critical of the steps being taken to confront the cultural and sociological factors that may glorify or perpetuate gang activity.

“You can’t just lock people up and throw away the key. You have to get to the root of the problem,” she says. “I think it only takes one good mentor to really change your life.”