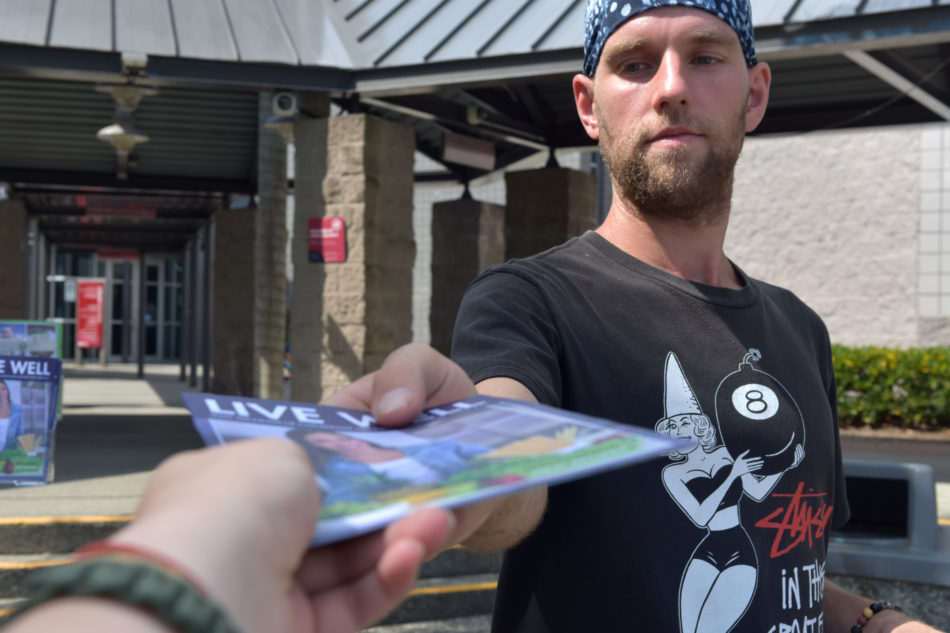 KPU’s vegan advocacy club is extending its outreach efforts to students who are looking to get involved with animal rights activism, veganism, or vegetarianism.

In late July, Richard Macmillan, the head of the Let’s Be Compassionate club, handed out vegan cupcakes to interested students. He believes that when students are exposed to a tasty variety of vegan food they might think about incorporating more of it into their regular diet.

His efforts were inspired by SFU’s Veggie Lunch Program, which has been serving students with healthy, affordable vegan and vegetarian lunches every Tuesday, Wednesday, and Thursday for 25 years. Macmillan says he has tried those lunches and describes them as “incredible.”

The cupcakes were made by Kalarupini Roy, who runs the Veggie Lunch Program. Roy is a Vancouver-based animal rights advocate and the president of Guara Hari Karma-Free Meals. The charity organization regularly serves free vegetarian meals to locals in the Downtown Eastside as well as in four cities in India.

“It’s always good to make affordable food for people,” says Roy. “Specifically the student population can be affected by a lack of money. People love food, so whatever you want to do, if you want to get their attention, you can give them some food and they will try to listen.”

Macmillan says that, before the cupcakes, he tried to find funding to give away whole meals to students but the KSA decided against it.

“We kind of want to move away from that,” says VP Executive of Student Life David Piraquive. “If people want to give away free food, we want there to be an event tied to it, or something additional. We want it to be more event-focused.”

Piraquive suggests vegan cooking classes as an example of a club event that the association would fund.

“I’ve personally considered eating vegetarian so learning about stuff like that, I think a lot of students on campus would appreciate it,” he adds.

Macmillan has also publicly screened documentaries containing footage of animal mistreatment in factory farms, which has reportedly upset students in the past.

“We did this last summer, and when we did it then, we and the KSA got some complaints [saying] that the images were too graphic … and that some people were kind of traumatized by some of the videos we were showing,” he says. “The KSA encouraged us to take a breather on that, and so we did. This summer we were showing different videos.”

The club did not receive any complaints this summer, and Macmillan says he’s committed to “going through all the hoops now” in order to host club events and show educational material on campus.

“They are violent images, but it’s what’s happening every day,” he says.

Roy says that she became a vegan after viewing documentaries about animal rights abuse and the impacts of factory farming two years ago.

“It’s not something that I really want to see, but I understand it’s necessary sometimes to show people and make them think,” she says.

The Let’s Be Compassionate club is planning on putting together a “Veg Expo” in the fall semester. Macmillan is hoping to invite vendors to give out product samples, have fitness and cooking demonstrations, and host speakers such as undercover activists who have exposed illegal animal rights abuses in slaughterhouses.