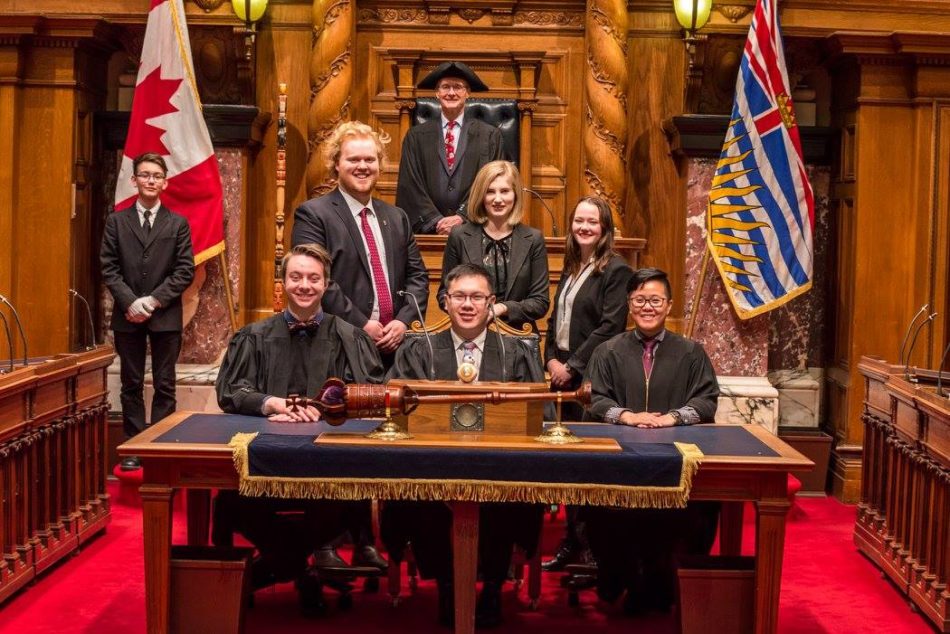 Students pose at the Legislative Assembly during a session of BC Youth Parliament. (BCYP)

At the event, a group of 97 students and non-students between the ages of 16 and 21 will debate issues presented in Private Member’s Resolutions and decide which projects the organization will run over the next year. The debates will cover issues from local communities as well as national and international policies.

University of Victoria student Sheridan Hawse will be serving as the Premier of the BC Youth Parliament for the upcoming session.

“For me personally, it’s been an opportunity to expand how I see my community by engaging with people who have very diverse opinions from me,” she says. “It has also been a really incredible platform to serve my community through service projects.”

The BCYP grew out of the the Older Boys’ Parliament, an organization established in 1924 which exclusively accepted Christian men. After facing pressure from the public and the provincial government to become more inclusive, the OBP became the non-denominational BCYP in 1974 and began accepting applications from women as well as men regardless of their beliefs.

In order to become a part of the BCYP, interested applicants must have at least five nominators sponsor them. The nominators have to be a part of an organization like a school or a service club. After being nominated, applicants submit a personal essay that explains why they wish to be a member of the BCYP and which relevant activities, like debating or public speaking, they have experience with.

“I never would have had the opportunity to do any of this on my own,” says Hawse. “I think it really gives youth a chance, not just to learn about the parliamentary procedure, but to be surrounded by a group of people who care about what’s going on around them.”

In 2017, the BC Youth Parliament debated issues like the Site C Dam construction and the upcoming referendum on electoral reform. Abbotsford MLA and Speaker of the Legislative Assembly Darryl Plecas joined the BCYP as the Lieutenant Governor last year, and according to Hawse, the position will be held this year by Global News reporter Richard Zussman.

Hawse says that taking part in a BCYP session can be a valuable and formative experience for B.C. youth, especially if they are interested in pursuing politics or community policymaking later on in life.

“A lot of our members join for one year and they don’t come back for a second, though they still talk about that one year of experience that they had,” she says. “It’s a really incredible opportunity to get to sit in the legislature. Many people don’t have that chance—the staff of the legislature don’t necessarily have the chance to sit in those seats.”

The deadline for mailing in applications is Oct. 23, and the registration fee is $395. Applicants can apply for financial assistance from school or community organizations, although the BCYP also offers limited financial support to cover a portion of the fee for those in need if they contact the registrar before the deadline.