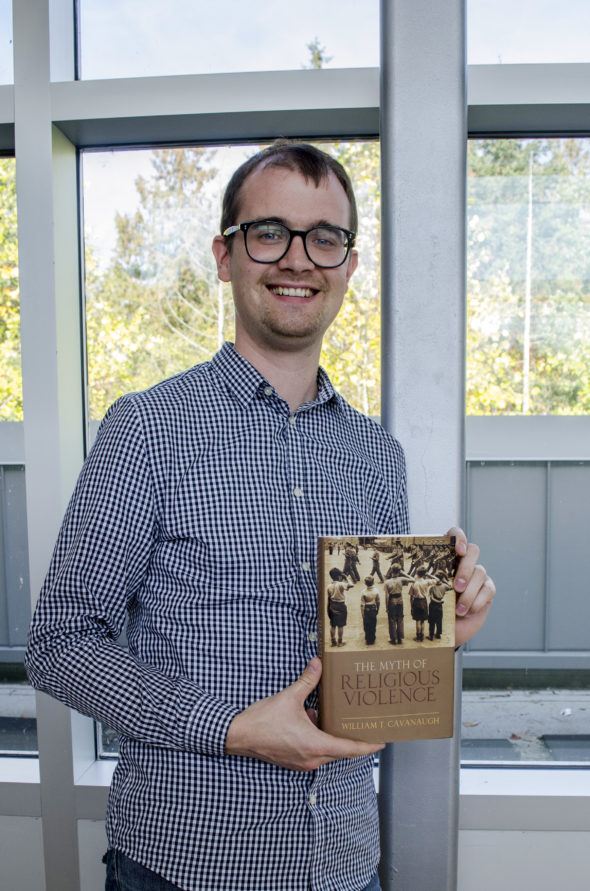 Do strongly held religious views increase the chance that someone will resort to violence?

That’s the question William T. Cavanaugh tackles in his book The Myth of Religious Violence. The book has in turn inspired a series of bi-weekly discussions being facilitated by the KPU Multi-Faith Centre.

On the surface, it’s a confusing question. Most religions hold central tenets that oppose violence and promote generosity, mercy, and kindness. In many cases, though, history tells a different story.

From historical conflicts like the Crusades and The Troubles in Ireland to present-day violence perpetrated by ISIS extremists and the oppression of Rohingya people in Bangladesh, religious beliefs have been repeatedly used as a way to incite and sustain conflict instead of preventing it.

One of Cavanaugh’s ideas is that the criteria we use to link religion to things that encourage violent behaviour—such as divisive thinking and claiming to teach absolute unquestionable truths—appear in many ideologies which are not just unique to religion.

“When you first hear that, you think, ‘Oh, that means that religious people are never violent,’” says Ethan Vanderleek, the Multi-Faith Centre Chaplain who leads the discussions. “That is definitely not the thesis of the book. It has to do with the definition of this term ‘religion’ and looking closely at its history and looking at how it’s used today—and also looking at how, maybe, it is misused in order to legitimize or defend certain types of violence and condemn other types.”

Christopher Gordon Laarz, a third-year criminology student, says that he appreciates listening to the different points of view presented in the book through the discussions.

“It is a difficult topic. It can be complex,” he says. “I don’t believe that religion is a problem itself. It’s radicalism that I believe is a problem. Being close-minded, and not being open to other beliefs or [considering] why other people think things, that’s what causes problems.”

A member of the Kwantlen Christian Fellowship, Gordan Laarz also says he is interested in attending future discussions held by the Multi-Faith Centre. He believes that students can benefit from participating in similar kinds of discussions, even if they are not religious or interested in the philosophies derived from religious scholars

“Sometimes you might not really understand why you think a certain way, but if you try and discuss it with someone, you might further believe in what you do, or you might change that,” he says. “It’s important to face that and have your beliefs and thoughts challenged. It’s a part of learning and I like that.”

“We are always looking for ways to encourage students to think carefully about the world we live in,” adds Vanderleek. “University is a unique time to be reflective on the world and our place in the world. At the Multi-Faith Centre, we want to be attentive—not exclusively, but certainly importantly to people who adhere to what we understand to be religious traditions like Christianity, Islam, Sikhism, Buddhism, and others.”

Each discussion will focus on a new section from the book. They will continue throughout the semester, taking place every other Thursday at 12:00 pm in the Multi Faith Centre, located in the Fir building on KPU’s Surrey campus.