KPU Should Have More Staff, Equipment at its First Aid Office 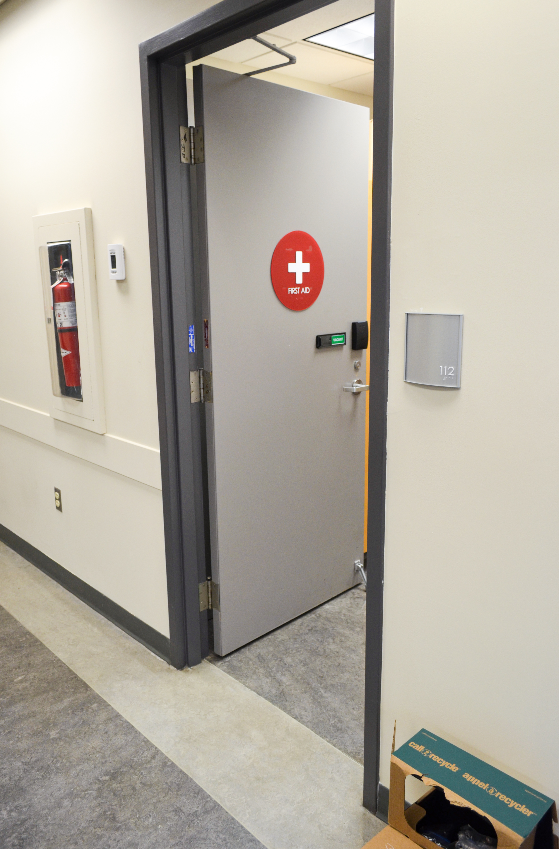 The first aid office on the KPU Surrey Campus is located across from the bookstore. (Kristen Frier)

With the news that an SFU student died recently while writing an exam, it’s a good time to take a look at Kwantlen Polytechnic University’s first aid office. While it’s there for students in case of certain medical emergencies, such as cardiac arrest, it might not always be able to help students with chronic illnesses, as one student, Tae Whitehouse, can testify.

Whitehouse has type 1 diabetes, a chronic disorder which prevents her body from producing insulin, the chemical responsible for regulating sugar levels in the body. Because of this, Whitehouse has to wear a pump that administers the hormone into her system throughout the day. On the rare occasion that the pump stops working, she has a limited window of time to inject insulin before her blood sugar levels grow fatally high.

On her way to class, Whitehouse noticed that her pump had failed and, estimating that it had been about an hour since she had previously injected insulin, knew there wasn’t much time to act. Unfortunately, running to the first aid office on campus didn’t help her. She first had to wait for one of the busy first aid attendants to arrive, and shortly after was told that the office doesn’t carry insulin or syringes.

“I wound up having to go across the street from the campus to a little pharmacy and had to buy needles from them,” says Whitehouse. “If they can’t provide basic care, then what are they there for?”

According to a report by the Canadian Diabetes Association, one in four Canadians live with some form of diabetes. Without proper medical care, many students with diabetes could, like Whitehouse, be in danger. Materials that are as easy to obtain as insulin and needles should be available in the first aid sections in all schools and at public events to help diminish that risk.

Medicine for diabetics isn’t the only thing missing from KPU’s first aid supplies. Painkillers like Advil or Tylenol and Naloxone kits are also unavailable on campus. Currently, students in pain are forced to travel to off-campus facilities to get the help that they need.

Whitehouse encourages the university to consider how many of their students could be at risk without access to these kinds of treatments on campus. She predicts that there are more people who could urgently need medical attention at KPU than “a lot of people in charge realize.”

“Something as basic as Advil or insulin syringes … is an absolute necessity for people who have medical needs,” she says. “Putting rules around basic medical care as a first aid centre for an entire university full of people with various disabilities and illnesses—that is super counter-productive for them to do.”

Having to wait for a first aid attendant, as Whitehouse did on the Surrey campus, can also be hazardous. In situations where students require immediate medical attention, it can be perilous to be forced to wait. However, the first aid attendants who do work on the school grounds are often busy with some of the hundreds of students that spend time on the campus every day.

In order to ensure the health and safety of KPU students, the school needs to recognize and implement changes to the first aid system so that those with health concerns can focus on their learning instead of wondering if they’ll survive a medical emergency.