KPU Students, Members of the RCMP, and Over 1,300 Children Fight to End Bullying Through Choreographed Dance 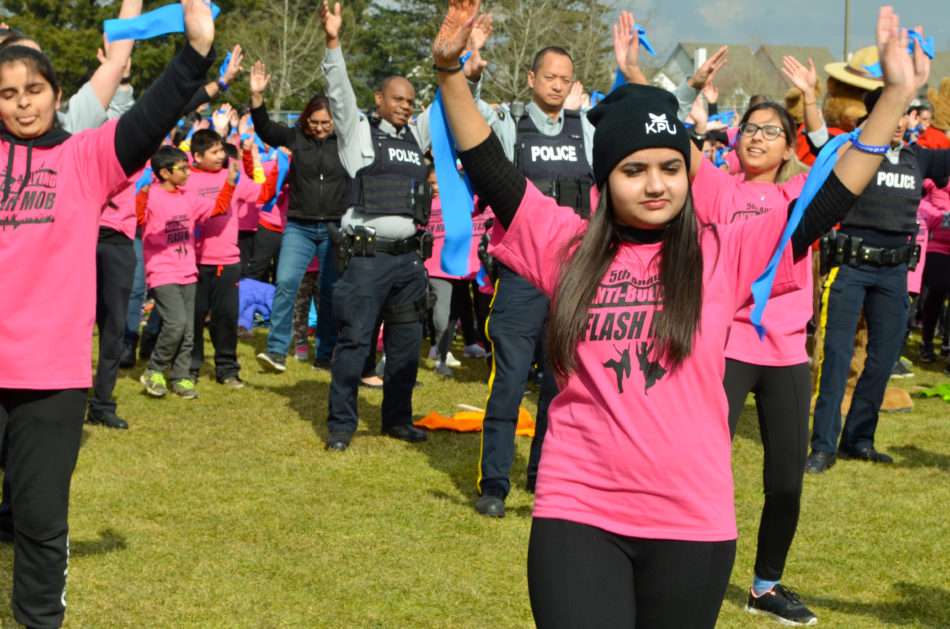 The KPU Bhangra team led students from several other schools, as well as officers from the RCMP, in an Anti-Bullying Day flash mob on the lower field of Tamanawis Secondary on March 14.

This year’s flash mob was the fifth anniversary of the event directed by Sean Bindra. Bindra is not part of any collective or organization, but is hoping to inspire change through community activism and the celebration of culture.

Members of the RCMP were there in uniform, but that didn’t stop them from getting in on the fun.

“It’s nice to get to connect with the community, especially the youth, in a positive setting such as this one,” says Richard Wright, an RCMP officer. “Too often police officers only get involved when intervention is needed, so it’s refreshing to be a part of something like this which brings everybody together for such a worthwhile cause.”

KPU student Hardeep Brar, who is a member of the university’s Bhangra team and served as one of the leaders of the flash mob, believes that “it’s important for us at the university level to get involved to help the younger students.”

She adds that role models who have had experiences with bullying should speak out against it on behalf of Surrey youth.

For the first time in the event’s history, the flash mob’s Bhangra dance was choreographed by Gurpreet Singh from the South Asian Arts Society.

“It’s not just about the dancing,” says Singh. “It’s the months of preparation that came before today.”

Singh worked with the KPU Bhangra club on the dance and visited elementary schools in the weeks prior to help lay the groundwork for an event of this scale and to teach students the steps.

The Bhangra-western fusion style of the dance was inspired by the residents of Surrey and North Delta, many of whom are of South Asian descent. The intention behind this was to give participants the opportunity to celebrate diversity while working towards a common goal; to fight bullying and, of course, to be a successful flash mob.

While flash mobs and choreographed dancing events do not have the power to single-handedly stop bullying, taking part in a lighthearted, low-pressure activity with more than a thousand other people has the potential to lift one’s spirits and make people feel a little less alone. Bullying is a tragically common experience that almost everybody has encountered in some form, and having such a wide variety of supporters show up to take a stand against it at a local high school is certainly a step in the right direction.