Program Intakes at KPU Cancelled Due to Financial Stress

Applicants are no longer being admitted to several programs across faculties 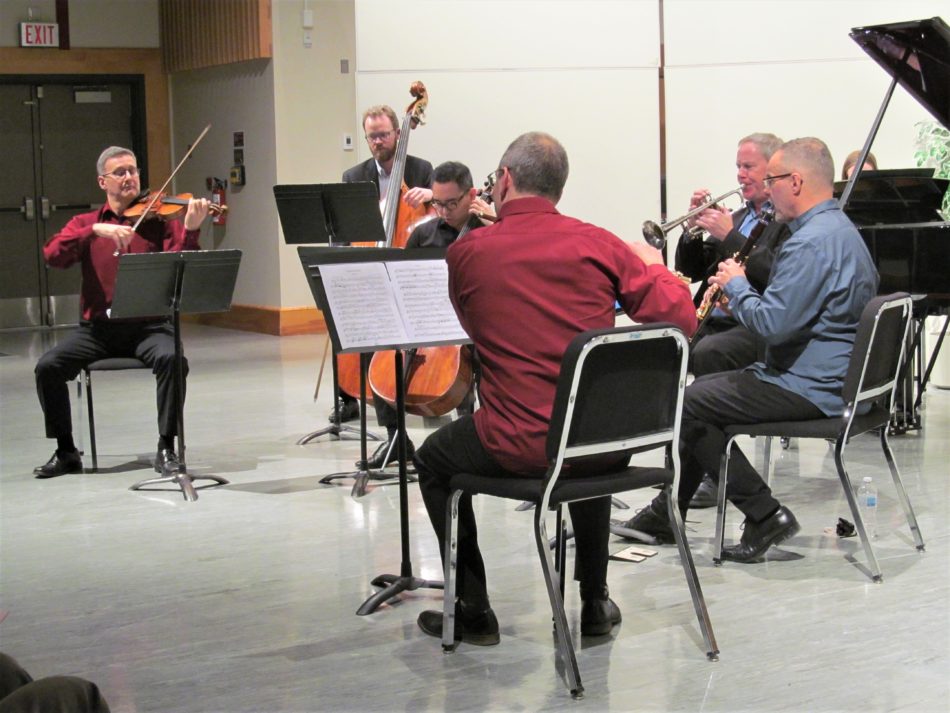 The Borealis String Quartet and other members of KPU’s faculty play at the showcase. (Katherine Charleton)

A draft of the operating budget for Kwantlen Polytechnic University’s upcoming fiscal year proposes a 2.2 per cent reduction in the overall number of class sections offered by the university. As a result, programs from seven separate faculties will have their course intakes suspended or cancelled altogether.

While this would deny many applicants hoping to become KPU students the opportunity to study here for the time being, current students will not be directly affected.

“This represents 126 sections out of a total of 5,682. Unfortunately, this will mean a number of layoffs, but we are working to mitigate the impact as much as possible,” reads a statement emailed to staff and faculty by KPU President Alan Davis on March 8. “At this point we anticipate further reductions of at least 1.5% each year for the next four years.”

Which programs will be affected? 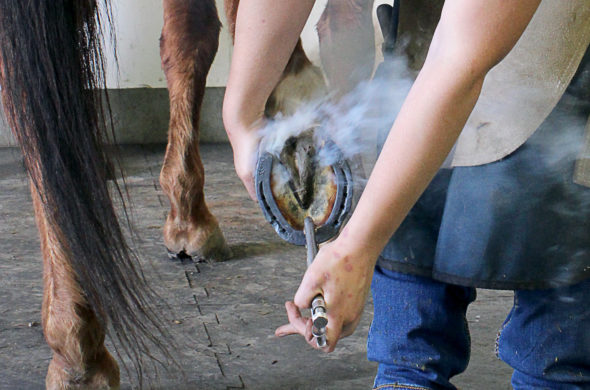 a student from the farrier program at work. (flickr/ Kwantlen Polytechnic University)

Programs that have had their intake suspended or canceled thus far include Music, Health Unit Coordinator, the HRMT Post Bacc program, Public Relations, Foundations in Design, and Fashion Design.

Proposed changes to the Faculty of Academic and Career Advancement, members of which were made aware of potential intake cancellations in November, have been put on hold while a KPU task force consults on how to move forward. The small, though expensive, farrier program has also had its proposed intake cancellation postponed until September.

According to Davis, the music program is five times more expensive than the average program at KPU, which has led the university to cancel intakes to “make room” for financial reassessment of the program.

He also explains that training for health unit coordinators is not currently in demand, and that, because the “public relations program is being completely redesigned and revamped,” intake for it was suspended as well for fall 2019. Finally, in design, Davis says that there were too few students in specific intakes, which have now been suspended.

If the proposed budget passes when it is presented to the university’s board of governors on March 27, Davis says the administration will spend the following semesters reevaluating each of these programs to determine their economic feasibility in the long run.

This decision comes as a result of what Davis describes as a self-identified need to “take corrective action now to keep budgets balanced, as required by legislation, into the future.” Because of the cuts, the university will be able to present a balanced budget of $225 million for the upcoming fiscal year.

How did it come to this?

In preparing KPU’s Vision 2023 document, which acts as a five-year plan meant to guide the direction of the university, the administration noted that costs had been exceeding revenue for the last several years, and identified a need to re-calibrate the institution’s finances.

“We did some really in-depth analysis and sort of long-term projections that showed that, in fact, we couldn’t actually afford growth,” says Davis.

Part of this issue stems from insufficient government funding to offset the cost of educating students. Davis says that, while operation costs are rising “at about four per cent every year,” the amount of money that the university gets from the government has stayed the same.

All of this contributed to the administration’s push to “reduce the amount of activity that we have [at KPU] and focus more on quality.” They hope to accomplish this by cancelling intakes into programs with low enrolment or high expenses.

Davis notes that, while these measures “reduce expenses on the delivery side,” the proposed operating budget also includes cuts to administration and annual expenditures and provides no new funding for strategic initiatives.

“In the one case we’re looking at opportunities to reduce the number of offerings so that we can save money,” he says. “In other areas we want to spend more money—for instance, on student services, to put more resources to areas where there are waitlists … and to create some room for us to reconsider some programs that look, on the face of it, to be very expensive relative to the number of students that we are serving.”

Davis wants members of the community to know that the goal behind these measures is “to make KPU sustainable and therefore make it stronger, and to really focus on addressing student demand and improving the student experience.”

In order to create room for that, the university needs to be “limiting new costs and creating new revenues,” he says.

Could this have been avoided? 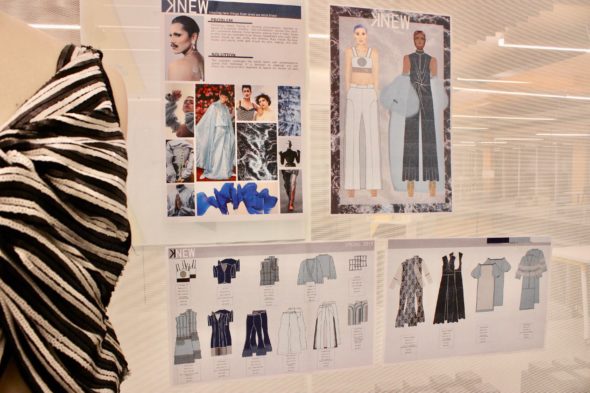 Illustrations made by students in the fashion design program were put on display. (Flickr/Kwantlen Polytechnic University)

According to Davis, who has been serving as KPU’s president since 2012, the current financial predicament might be attributed in part to oversights from the administration in long-term planning.

“What has been happening at KPU for many years was sort of taking last year’s budget, rolling it over, and adding a bit more,” he says. “At some point—and I think everybody would understand this—I think periodically you have to say, ‘Hold the line here. Let’s look at some things we can do more efficiently, more effectively, and let’s not just add in. Let’s try and get right what it is we’re already doing.’”

He says that there was no “faculty-by-faculty costing or program-by-program costing” during the budgeting processes of the past. Over the last few years, it became clear to him that “a more integrated approach to planning was necessary.”

Davis also feels that “higher education has a lot of inertia,” making it difficult to change internal processes in a timely fashion. This, too, may have brought KPU to its current financial situation.

“It’s like steering a very large cruise ship,” he says. “You make adjustments and the ship doesn’t move very much. It takes a lot of time to get decent traction.”

In reference to how the new Surrey Civic Plaza campus might have affected the operating budget, Davis explains that while construction is allocated to a different budget altogether, the cost of expenses like staffing, utilities, and security do impact operations. What’s more, every year, the university has to put a certain amount of money aside in operating costs in case the new campus needs to be rebuilt in the future.

“It has increased our costs to some degree, but it’s possible that that will be offset if we generate more business there,” he says.

Every year, the university moves any extra money it makes into a surplus that can be channeled into a variety of areas. Surplus funds often go into student awards, capital projects, and bank investments that generate interest.

They are not used to address financial issues like those KPU is currently facing, however. This is partially because they are considered a provision of “a margin of error” in regards to accounting.

“When you’re closing the books at the end of the year, there’s always this pretty intense time where you go, ‘Alright, we’ve got some money there. Let’s hope that’s enough to offset any accounting adjustments that the auditors make,” says Davis. “If you do end up with some money, you put it away for a good cause down the road, but you can’t spend it the next year because you have no offsetting revenue. You won’t have a balanced budget.”

The surplus is also a one-time, unreliable source of revenue. It’s different every year, and with KPU’s recent instability in enrolment and admissions, it has been particularly difficult to predict offsetting revenues. It’s also rapidly amending, and thus any radical changes to the surplus would have the potential to unbalance the rest of the budget.

For these reasons, KPU can not dip into the surplus fund to address concerns about its expenses, and instead is cancelling program intakes.

What else is in the proposed budget? 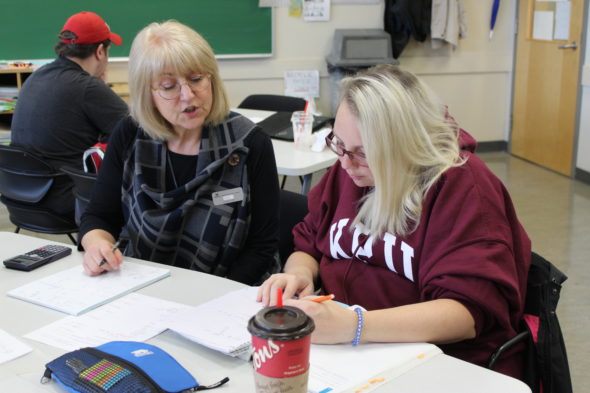 A student in the Faculty of Academic Career Advancement works with a tutor in class. (Aly Laube)

The latter could, hypothetically, prevent financial complications such as those KPU is currently facing from happening again. The team behind the integrated enrolment management initiative would also help increase the average class size from 22 to 24 students institution-wide, according to Davis, which will bring more revenue to KPU.

Another proposed change is to put $300,000 into student services “to improve frontline services, to promote student retention and success, [and] enhance support for students with disabilities and student mental health and wellness,” according to Davis.

Creating new investments to support faculty through the Office of Teaching and Learning—so that they can receive training and experiment with pilot projects—is also recommended in the budget.

The final proposal is for a series of capital investments, including $1.9 million for classroom and library enhancements, $2 million for employee computer, workstation, meeting room, and AV improvements, and $4.8 million in general campus infrastructure improvements across all campuses, as well as Safety and Security, IT, and Facilities projects.

There has been a strong response from the community since the word has spread about the intake cancellations, particularly from students in the music program.

Though Davis says that the administration’s ultimate intention is to save the music program, he stresses that without calibrating costs, it could not survive.

“There’s no way we would be able to afford it. It’s extremely expensive,” says Davis. “There are different ways to deliver music and we need to explore those, so the cancellation of the September intake provides room for that.”

He says that this is true for all of the programs with intakes at risk in the new operating budget.

“If demand for some of the programs increases or we can find a different way to deliver them or a more effective way, you’re either going to increase student demand or you’re going to create a delivery model that’s more effective,” he says. “Hopefully we will be able to reintroduce these programs or open up the intake down the road.”

Davis is unsure of when updates on intake statuses and program reassessments will be available, but suspects that more solid plans will be making the rounds within the administration in 2020.

For now, KPU is focused on passing the proposed budget and dealing with any subsequent layoffs to faculty that may result from the cuts.

“I’m really pleased with the levels of engagement from lots of different people, lots of committees and individuals, external and internal, and I think that we’ve done a pretty good job of presenting the situation that KPU’s in,” says Davis. “I think, in time, people will look back and say, ‘Yeah, that was the right thing to do and KPU is stronger and better for it.’”